How NH Owls Spend the Winter 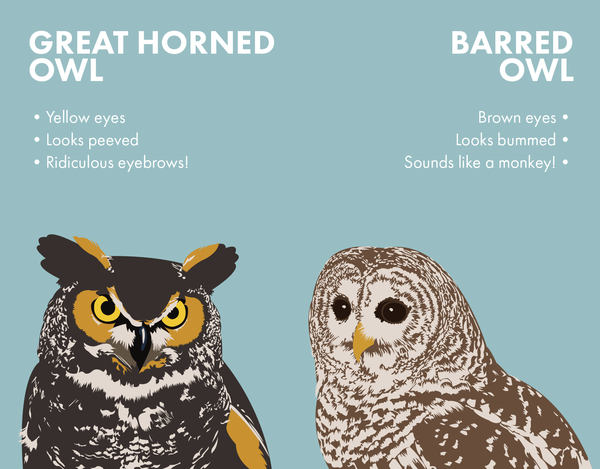 Spring is here!  Well, sort of.  Technically, spring doesn't start for another six weeks. But some stoic Yankees say that winter begins in New Hampshire when you start stacking your wood pile in late August.  So it follows that Winter Solstice (the shortest day of the year) is the first day of spring training - pitchers and catchers reporting for light duty.  And now, six weeks later, we're seeing 10 hours of daylight and growing, and we're ready to open the season.  The next logical question... who's on first?

Owls have already spent the month breeding and setting up their nests.  Right about now, they're starting to lay eggs.  But we have several species of owl in New Hampshire.  The Barred Owl is your friendly neighborhood owl.  It's the one that wakes you up at night with that "who-cooks-for-you" call.  Then there's the Great Horned Owl.  There's a trick to differentiating between the two: Ask yourself if it looked mad or sad, and did it have yellow or brown eyes?  The fierce-looking yellow-eyed owl is a Great Horned Owl.  The sad-looking one with gentle brown eyes is our Barred Owl.

In these dark days of January, owls are preparing for days of warmth and light. And they need to. Owls are larger birds, so their eggs require a long incubation period; and young owls are dependent on their parents for months.  Smaller songbirds go through all that in just a few weeks.

Turning that nest of eggs into adult owls presents a number of difficulties - the first of which is trying to keep the eggs warm in February!  That's why owls make their nests in hollow trees.  These little wooden cabins provide much needed protection from the most biting of meteorological elements.

Once those downy owlets hatch in March, it's a full time job keeping them fed.  As they get bigger, they require more and more protein, so it's no coincidence that people start seeing adult Barreds hanging around their bird feeder at the end of winter.  At that point, the owl is feeding 2-4 young. They're staking out the bird feeder to pick off much needed protein in the form of rodents that collect the fallen seeds and husks other birds have dropped.

Meanwhile, the rodents are doing the same thing - raising little mice, chipmunks and red squirrels back at their dens.  Then right around the end of March or early April... the snowpack melts and suddenly there's an explosion of the young of the year (mice, voles, squirrels).  That's great for the owls because in April the owlets are still reliant on their parents for food, and young rodents are easy pickings for the owls.

By May the owlets have left their nests but are not skilled enough to feed themselves, so they're still not too far from their parents.  That's when you're most likely to hear their food-begging calls, as well as that surreal call that sounds more like a monkey than an owl.

So even now, in the depths of winter, owls are stepping up to the plate to lead off the new Spring season. Happy Opening Day!