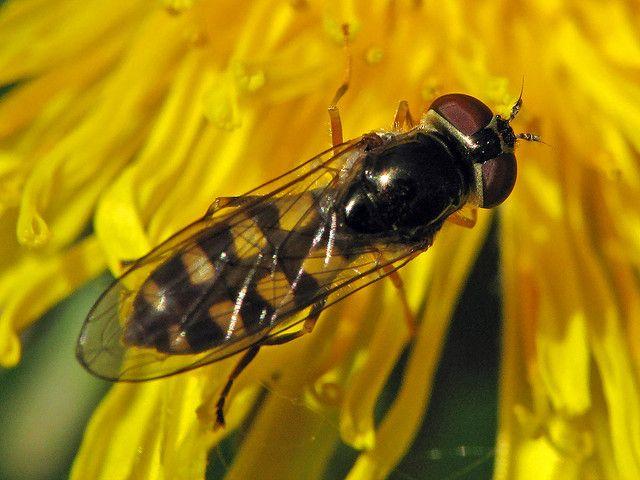 While hiking on Mount Monadnock this summer, I witnessed an odd phenomenon: nearly-motionless hovering insects with orange-yellow stripes over a dark body suggesting wasps or bees. The tight aerial formation of insects hovered at eye level in a shaft of sunlight over the trail.

The “Hover Flies” - sometimes called “Flower Flies” - belong to a LARGE group in the Order “Diptera” (the true flies). Those in the Family “Syrphidae” have only one pair of wings. All wasps and bees have two pairs of wings.

Hover flies sport spots, bands or stripes of yellow or light brown against a dark background. Many are covered in dense body hair suggesting a bumble bee. They are capable of fast flight and can hover perfectly motionless.

In summer, hover flies are found nectaring on woodland or meadow wildflowers or in gardens alongside butterflies, bumble bees and other flower-dependent insects. Males emerge and mature earlier in summer than females. Hover fly larvae are beneficial to garden crops by eating pests including aphids.

While hover flies do NOT sting and are completely harmless, their hovering and dark and light stripes mimicry protects them from falling prey to birds and other insectivores which avoid eating bees and wasps. Birds generally will not attack bees as they innately know about stinging.

Biologists use the term “Batesian mimicry” to describe when a palatable, vulnerable species (the Hoverfly) closely resembles either an unpalatable or a well-protected species (a bee or wasp). This “sheep in wolf’s clothing” strategy provides a twist on camouflage: the prey species uses camouflage not to hide, but to frighten potential predators.