Creatures in the Night 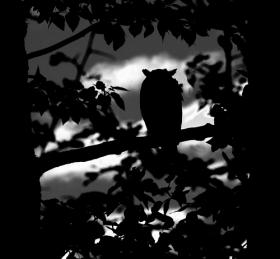 Why are so many animals active, given their limited ability to see in the dark?

Wildlife tracks in the snow indicate a lot of coming and going in the nighttime world. Why are so many animals active, given their limited ability to see in the dark?

There's the obvious reason: division of resources helps avoid competition. A red-tailed hawk hunts the same fields by day that a great horned owl hunts by night. Night also offers some animals protection from their main predators. Mice lie low by day, but in the wild—and in my house—they come out at night.

The one big answer about nocturnal habits goes back in time--way back--when dinosaurs in a great diversity of species, exploited every available ecological niche—by day. That left the nighttime world open for a whole host of creatures. The first mammals appeared well after the dinosaurs were established, and the first known mammal by fossil record was a very small, shrew-like animal. While dinosaurs ruled the daytime world, this early mammal—perhaps the very first mammal—became active at night.

It's also a habit that helped mammals survive the mass extinction that befell dinosaurs 65 million years ago. That's when debris from a giant meteor's impact blocked the sun, creating a significant period of cold and dark. Warm-blooded, fur-coated and nocturnal, the early mammals survived. Plant-eating dinosaurs were the first to go as vegetation died, followed by carnivorous dinosaurs that preyed on them.

Absent the threat and competition of dinosaurs, mammal species evolved rapidly to fill most land and marine niches. Today, as daylight fades and on through the night, new tracks are laid in the snow by wild ones sharing ancestry—and nocturnal habits—going back almost 200 million years.