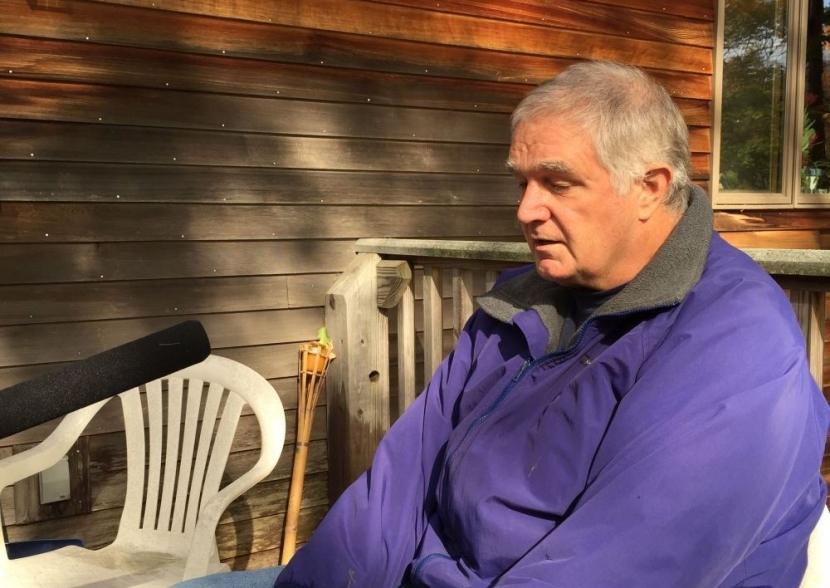 Black bears are as much a part of New Hampshire forests as fall foliage and stone walls, nevertheless they are a misunderstood species. To better understand the species, we wanted to talk to a bear, but the closest thing we could get was Ben Kilham. And that’s pretty close, which is evident when you meet him. He’s over six-feet tall and moves with a slow ambling gait. His ursine tendencies aren’t surprising when you consider Kilham’s been studying and living with black bears for nearly 25 years.

“Basically we rehabilitate black bear cubs and return them to the wild. I also study black bear behavior. We keep GPS collars on 10 wild females and track some of the cubs we’ve released.” He founded the Kilham Black Bear Rehabilitation Center in Lyme, New Hampshire with his sister, Phoebe, and together they have taken in, rehabilitated and released about 130 orphaned cubs over the years.

Not all the cubs he has rehabbed were actually orphans; some were abandoned. Kilham explains that, “first time moms and mothers with not enough fat will give birth to cubs. When they run out of milk they automatically come into estrus and attract males, so they run off and leave the cubs or expose them to the males.” 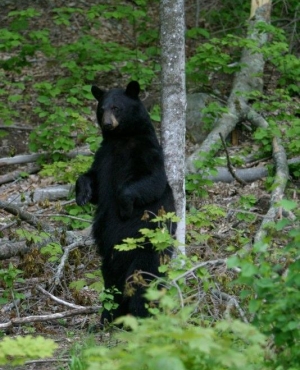 But the single biggest contributor to orphaned cubs is unprotected chicken coops. Sows come having smelled the chicken feed available and are usually pawing around the coop for more of the grain to bring to her cubs. Hasty coop owners will too often shoot the mother. But there’s a simple way to protect your chickens and protect the bears from becoming a nuisance; an electric fence. Kilham says you just have to rub a little bait on it, like bacon grease or peanut butter. “Bears check out all new smells with their tongue. And once they’ve been zapped on the tongue they have very little interest in what’s behind the fence.”

Another way to protect bears has to do with that clear plastic tube in your backyard filled with sunflower and flax seeds. Bird-feeders are probably where most of us are likely to encounter a black bear. So it’s worth knowing when to have that feeder out. “Traditionally it’s safe to put them out after Thanksgiving and bring them in around April 1st when the snow is gone,” says Kilham. That is the time of scarcity in the natural world, larger animals have entered torpor – bears have “denned-up” – to conserve energy, rather than spend it looking for food. And this is the time of year when your feathered friends, who are still active need the most help. 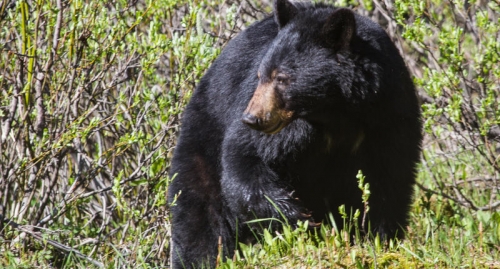 And when it comes to finding food, the situation isn’t every bear for herself. Kilham has observed several generations of bear society in his more than two decades studying them. Sows, typically have a home range of 3-8 square miles, but some years that range provides more bounty than others. In years when there is a dearth of food, she may wander to a different part of the forest. “So they’ll end up in a neighboring female’s home range where there is a surplus of food.” Kilham has observed that the “host” sow allows visiting sows to feed; because the “host” sow understands on some level that she may be a visiting sow another year.

Kilham gets excited about this behavior. “This is reciprocal altruism is a basis of human behavior. This is the first non-human animal that this type of behavior has been described in.” He’s also observed several social mechanisms that that accompany reciprocal altruism: justice and punishment, friendship, food-sharing, and moralistic aggression.

How to "Speak Bear"

Bears are intimidating. They’ve got these huge claws and teeth that look like they could probably rip you to pieces. But Kilham’s spent much of his life painting a more nuanced picture of these marvelous beasts. “Bears can read our emotional communication,” he says. “But it’s not that hard for us to understand how a bear communicates.”

Imagine yourself walking on a trail the wind is blowing through the leaves. The sun trickling through the canopy overhead, maybe you’re even whistling a happy tune. And suddenly you come across a sow, who has hurried her cubs up a nearby tree. “She false-charges you, she rushes at you, swats the ground, expels a big blast of air, your bodily fluids start to loosen up a bit.” A natural reaction, but despite what we might see as aggressive behavior, Kilham says that she is seeing you as the aggressor. “Think about it they were having a perfectly fine day until you showed up.” So this display is simply a tactic to delay confrontation to establish communication.

You’re standing there with soiled shorts – you’ve stopped whistling, but what’s the right thing to do in this situation? A common myth is to make yourself look bigger and shout at the bear to scare it off. But as Kilham points out, “if it’s a sow with young cubs and you scare those cubs, you’ve escalated the situation. Always de-escalate.” It’s not as hard to do as it sounds, because remember bears can read our emotional communication. It’s as simple as talking softly to the bear, in the same sort of appeasing tone you might use for your pet or a young child. 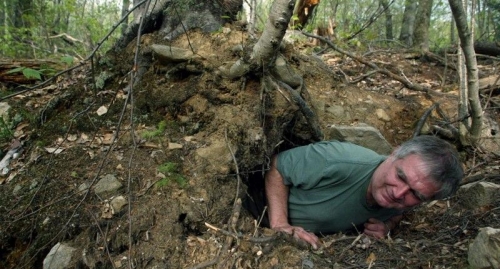 Ben Kilham gets close to his work inside a bear den. Photo courtesy Ben Kilham

Clearly, Kilham has learned much about black bears over the years, so recently that knowledge has been tapped to assist researchers in China with a different population of bears. “We’re working on the reintroduction of captively-bred panda cubs to the wild.” The goal is to have a panda that researchers can follow long term in the wild.

If you’ve watched animal planet, you’ll be familiar with a “hard-release.” It’s when a rehabilitated (or relocated) animal is brought to their new location, the cage door is opened and it scurries away. “Our program will be a soft release,” says Kilham. “Researchers are establishing relationships with the cubs before they go out; we will be with them as they go out; we’ll be able to see any problems that occur. And if one of the cubs is unsuitable which is possible, then we’ll bring them back in and they’ll be no worse than they were.

As we left the bear to his work, it was clear that orphaned bears Ben Kilham helps to rehabilitate are fortunate to have arrived on his doorstep.