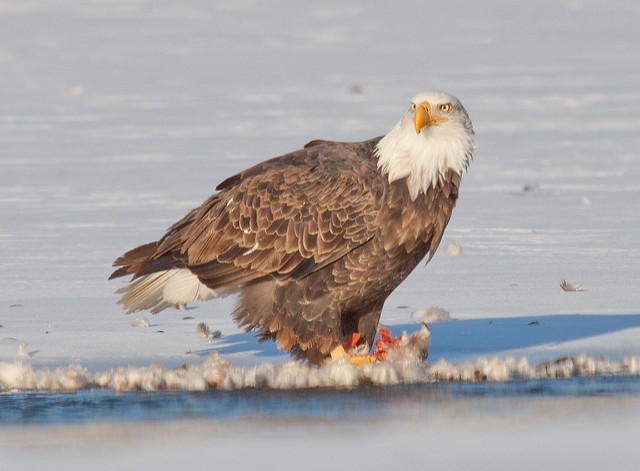 Once listed as "Endangered" in NH, Bald Eagles are becoming an increasingly common sight. Courtesy Shawn McCready via Flickr/Creative Commons.

On a recent edition of NHPR’s The Exchange, Chris and Iain MacLeod, Executive Director of the Squam Lake Natural Science Center were on hand to discuss one of their favorite species.

The reason for their discussion and the revelation that “balds” are everywhere are based on the results from Audubon’s mid-winter eagle survey. This year’s numbers show an extension of the recent trend of population recovery. As recently as 1980, you’d have been hard pressed to find a bald eagle in New Hampshire. This year’s count found 200 adult eagles and their young, plus another two or three hundred young eagles totaling about 500 bald eagles in the state.

But, as we’ve established on Something Wild in the past, a population rebound like this for predators like the balds is going to make waves elsewhere in the food web. Which bring us to today’s word of the day: kleptoparasitism. This is the strategy of stealing food from other species, and bald eagles are experts at this.

Great blue herons carry their food inside their throat. And an eagle will harass one on its way back to its nest with food until they literally throw up the food. Charming, right? Balds use this same strategy with ospreys, letting them do the work of catching the fish before chasing the osprey until it drops the fish. 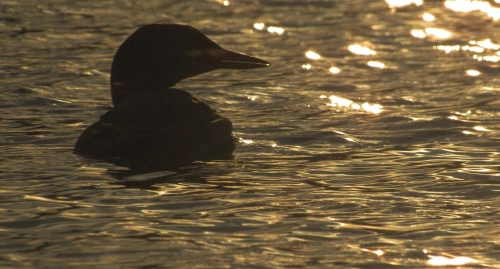 Of course, any discussion about eagle population eventually comes around to loons. These two birds live and feed around the same lakes and ponds in New Hampshire. There are a lot of anecdotes about eagles behaving aggressively towards loons, but initial observations suggest that eagles aren’t having a huge impact on loon populations, yet. Nonetheless, balds prey on loon chicks and will try to steal food. Sounds like a tough beat for the loons (and the herons and osprey).

But when we take a step back, we see a different picture. And when we do we remember that it’s an ancient and complex relationship. Bald eagles and common loons have been neighbors for thousands and thousands and thousands of years (minus the last 40 or so). Loons are innately adapted to cope with threats that are around them. Raptor biologists would argue that eagles are actually performing a service to the loon population in the sense that they are making them smarter and more wary.

As MacLeod put it, balds are “sort of the new bully in town.” Ecosystems are always in a state of flux, and as eagle populations increase populations of other species they live with have to adjust to a new equilibrium.

Listen to this Something Wild feature here