Are Golden Eagles Returning To The Granite State? 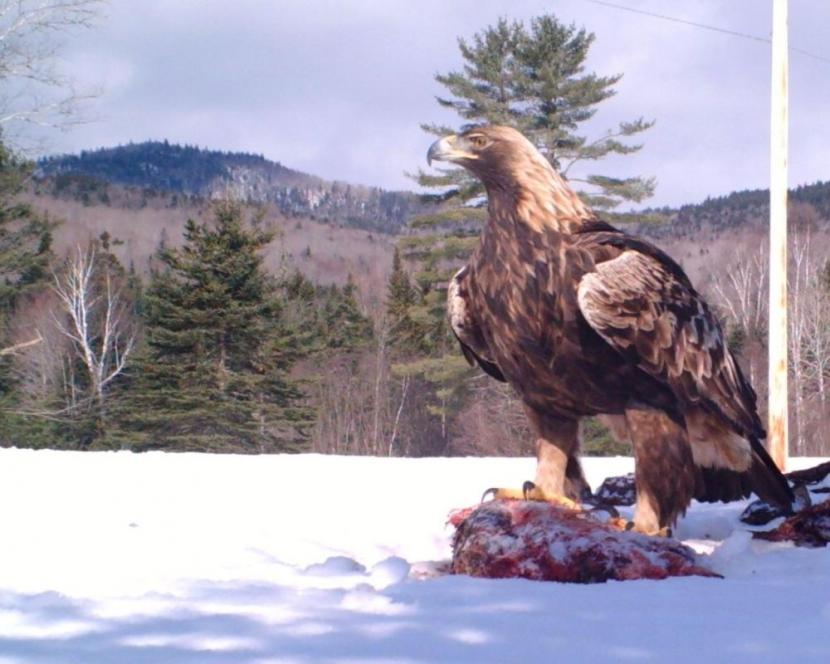 This golden eagle on a deer carcass in Northern NH poses for a self portrait on a remote wildlife camera. Photo courtesy of Chris Martin, NH Audubon 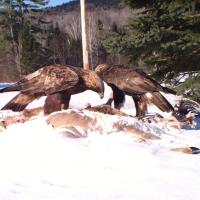 Golden eagles are sometimes confused with young bald eagles, but there are differences. When bald eagles are in flight, they hold their wings flat like a plank, but golden eagle wings have a slight ‘V’ shape.

Goldens don’t stick around the granite state for too long these days, but they did nest in New Hampshire once upon a time. The last successful golden eagle nest happened more than fifty years ago. There is lasting evidence of the golden eagle’s presence here, Eagle Cliff in Franconia Notch is named for the goldens that made their home there in the late 1800s.

So, what happened to them? It has a lot to do with the changing landscape in New Hampshire. In the 1800s, New Hampshire was open country and farm land. Full of the kind of prey goldens rely on, like small sheep and calves. Big game for a bird, but the golden is a large and powerful one. Once the farms started closing up, reforestation began which meant big trouble for the golden eagle. Add to that the increase in the use of DDT after World War II and you’ve got the recipe for why goldens aren’t residents of New Hampshire.

New evidence is pointing towards the golden eagle making a comeback here. Researchers on the east coast have started placing transmitters on wintering eagles and tracking their routes. This gives us a better idea of where the birds are at any given time and when they might be in a particular place. The New Hampshire Audubon has even set up a wildlife cameras with motion sensors so we can see first-hand if goldens are starting to nest here again.

If you’ve spotted a golden eagle, we’d love to see a photo or hear your story. Send us an email: somethingwild@nhpr.org.

Listen Here: Are Golden Eagles Returning to the Granite State?