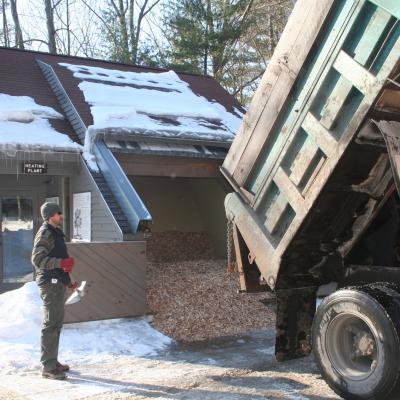 In 1996, the Forest Society installed its new heating system and began heating the Conservation Center entirely with renewable energy. The new centralized ChipTec® A-5 model wood-chip gasifier, is housed in its own building. The system uses locally harvested hardwood chips that are combusted into a gas, which is then burned inside a boiler to produce hot water that is circulated via insulated underground pipes to radiators in each building throughout the campus. These radiant baseboard systems require 28% less fuel to provide the same amount of heat as a conventional fin-tube baseboard system.  The gasifier burns approximately 100 tons of hardwood chips annually. The woodchips are burned at a very high temperature producing small amounts of ash (approximately 500 lbs. per year).

Recent energy performance modeling of the Conservation Center revealed an Energy Use Intensity, or EUI score of 47.55 kBTU per square foot per year. EUI is defined as energy per square foot per year. It’s calculated by dividing the total energy consumed by the building in one year (measured in kBTU) by the total conditioned floor area of the building. It’s similar to determining the miles per gallon for a vehicle. The Forest Society compiled several years of energy data to determine our baseline EUI. We are now working towards lowering our EUI even further by pursuing ways of reducing energy consumption even further while also improving comfort in the building. Stay tuned for more information.