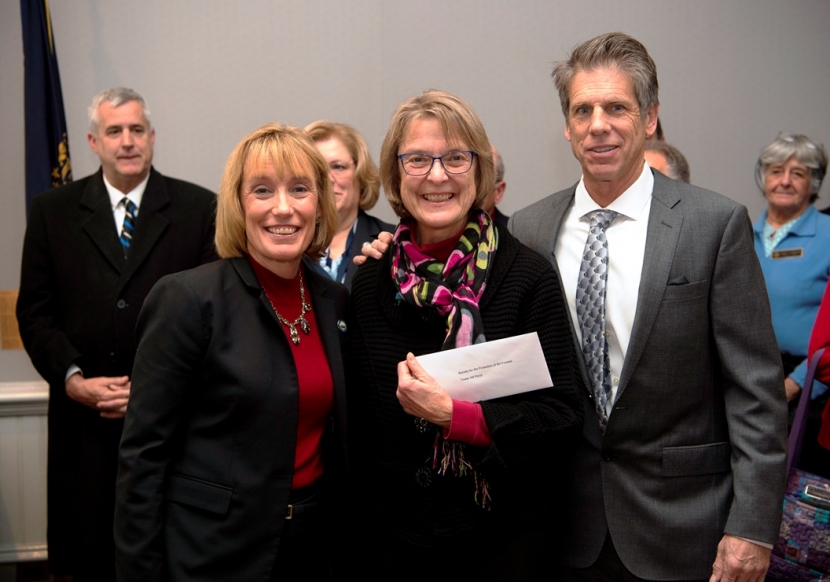 Gov. Maggie Hassan congratulates Jane Difley, president/forester of the Society for the Protection of N.H. Forests, and Doug Cole, chair of the LCHIP Board of Directors, just after the 2016 LCHIP grant winners were announced at the Legislative Office Building in Concord on Dec. 8

CONCORD – Dec. 9, 2016 – An opportunity to protect a source of public drinking water for Manchester and surrounding towns prompted the state’s Land and Community Heritage Investment Program (LCHIP) to award the Society for the Protection of N.H. Forests (Forest Society) with a grant for $300,000 to use in its effort to conserve 1,870 acres of land surrounding Tower Hill Pond in Candia and Hooksett. 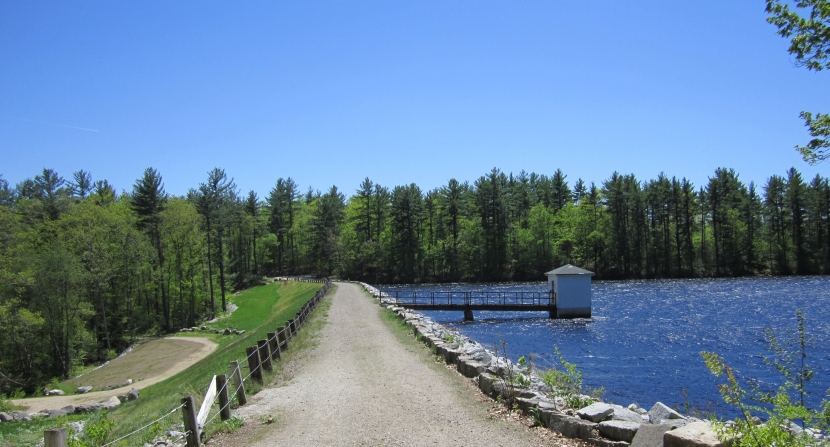 The land is owned by Manchester Water Works, the state’s largest water utility. The utility uses Tower Hill Pond, a manmade impoundment, to supplement Lake Massabesic, the source of drinking water for residents in Manchester and parts of Auburn, Bedford, Derry, Goffstown, Hooksett and Londonderry.

The total project cost is $2.3 million. Prior to the LCHIP grant announced Dec. 8, the Forest Society was awarded a $932,737 grant for the project through the Water Supply Land Protection Program and a $400,000 grant from the Aquatic Resources Mitigation Program (ARM), both administered by the N.H. Dept. of Environmental Services.

“We are thrilled to have LCHIP as a partner as we collaborate with Manchester, Auburn and Candia to help them attain their conservation goals,” said Jane Difley, the Forest Society’s president/forester. “LCHIP’s crucial grant support underscores the importance of protecting forests that in turn buffer and protect our drinking water sources from pollutants that result from commercial development.”

Dijit Taylor, LCHIP’s executive director, said the Tower Hill Pond project was a winning candidate for LCHIP funding for many reasons in addition to water quality.

“The LCHIP Review Panel and Board of Directors valued the large size, the array of ecological values, the public recreation usage and especially the partnership between Manchester Water Works and the Forest Society to ensure permanent protection of the public water supply for 160,000 people living in Manchester and surrounding towns,” she said.

The land being conserved contains six miles of trails used extensively by the public for walking, mountain biking, cross-country skiing and snowmobiling. It includes two miles of undeveloped shoreline around Tower Hill Pond, as well as 291 acres of wetlands that host a diversity of wildlife species. Ecological assessments have shown at least a dozen rare or threatened plants and animals exist in the area. The conservation easement would guarantee continued public access to the land for recreation.

Manchester Mayor Ted Gatsas and the city’s Board of Aldermen have authorized a purchase and sales agreement between the Forest Society and Manchester Water Works for a conservation easement price that is below its appraised value. The Conservation Commissions of both Candia and Hooksett have also endorsed the project, as has the Merrimack Conservation Partnership. The land is within a priority conservation area for the Merrimack Valley Regional Conservation Plan.

The project is scheduled to close in 2017.

LCHIP is an independent state authority that provides matching grants to New Hampshire communities and non-profits to protect and preserve the state’s most important natural, cultural and historic resources. Its legislatively mandated mission is to ensure the perpetual contribution of these resources to the economy, environment, and the quality of life in New Hampshire.  Since its inception in 2000, the program has provided 372 grants which have helped to protect nearly 200 historic structures and sites and to conserve more than 278,000 acres of land for food production, water quality, ecological values, timber management and recreation including hunting and fishing.

LCHIP grants are supported by fees on four documents recorded at the Registry of Deeds in every county of the state.