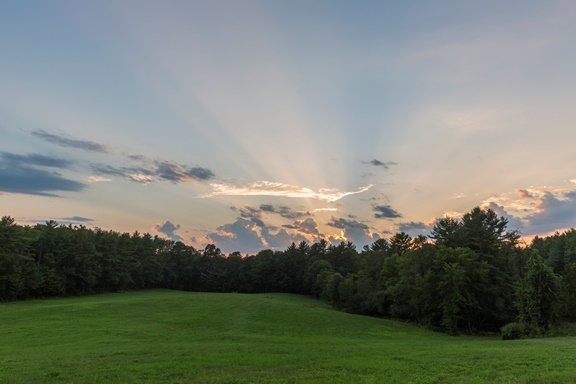 The Powder Major's Farm and Forest project will create a new conservation and recreation area in Durham, Madbury and Lee. Photo by Jerry and Marcy Monkman / Ecophotography.

CONCORD – Aug. 25, 2016 – A donor has issued a challenge grant that will match $100,000 in donations to the Society for the Protection of New Hampshire Forests’ (Forest Society) effort to create a new conservation and recreation area in Durham, Madbury and Lee. The challenge grant from the Thomas W. Haas Fund of the N.H. Charitable Foundation comes just as the Powder Major’s Farm and Forest project – the conservation of nearly 300 acres of highly developable land along the Oyster River and Route 155 – is surpassing the half-way point in fundraising.

“So far, we’ve raised more than $1.2 million on our way to $2.25 million, so we hope this challenge grant will encourage people to give now and see their gift instantly doubled,” said Jane Difley, the Forest Society’s president/forester.

The Forest Society is working with the three towns of Durham, Madbury and Lee to buy a 195-acre property, located behind Tibbetts Field and near Moharimet Elementary School, from the Goss family. This land and its extensive trail system will become a forest reservation that will protect Durham’s drinking water supply, provide recreation opportunities and protect wildlife habitat in the fastest growing part of the state. The project also includes the purchase of a conservation easement on an abutting, 32-acre agricultural property also owned by the Goss family, and the acquisition of a conservation easement on 60 acres of abutting land owned by the town of Madbury.

The Oyster River travels nearly a mile through the bigger parcel, which is located within a Source Water Protection Area. The Oyster River is the drinking water source for the town of Durham and for the University of New Hampshire.

The Oyster River flows into Great Bay, so protecting the land along the river also protects the water quality of the bay, an important tidal nursery for many wildlife species, said Dick Weyrick, also a member of the Oyster River Watershed Association.

“Great Bay is greatly troubled as far as water quality, and as the rivers go, Great Bay is going to go in that direction, too,” he said.

Once conserved, the Powder Major’s Farm and Forest will be a tangible tie to the region’s Revolutionary War history, said Eric Fiegenbaum, chair of the Madbury Conservation Commission. The land once belonged to Maj. John Demeritt, who became known as the “Powder Major” after taking part in a 1774 raid of the British Fort William and Mary (now Fort Constitution). He stored the looted gunpowder from the raid in his farmhouse cellar and then delivered it by oxcart to the Continental Army for use in the Battle of Bunker Hill.

“In Madbury, there is no better historical connection than the (Powder Major) Demeritt one for us to protect,” Fiegenbaum said.

The Forest Society will be hosting tours of the property with guest speakers on September 24 (in association with the organization’s annual meeting) and a to-be-determined date in October. More information about these events, fundraising progress and how to donate may be found at www.forestsociety.org/powder_major.