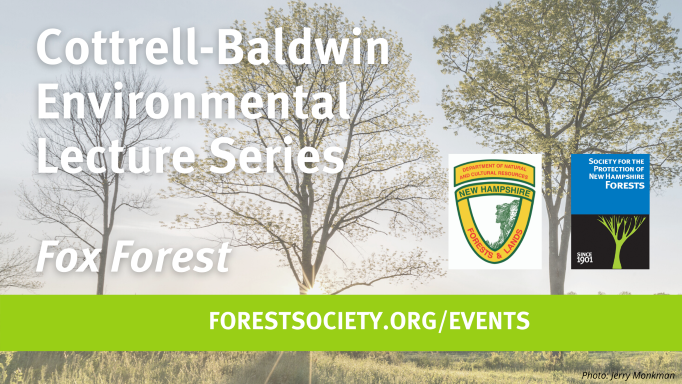 Join the Society for the Protection of New Hampshire Forests and the NH Division of Forests and Lands for the 2022 Cottrell-Baldwin Environmental Lecture Series at the Henry I. Baldwin Environmental Center at Fox Forest in Hillsborough. This year’s series explores the relationships between cultural history, natural history, wildlife, water, land use, recreation, and conservation in the forests of northern New England.

The lecture series will be held on Tuesdays, March 15, March 22, March 29, and April 5 at the Fox Research & Demonstration Forest at 309 Center Road in Hillsborough. Attendees can join for one presentation or all four, registration is required as the series often fills up and will be limited to 50 attendees per session. For more information, call 603-224-9945 ext. 313 or visit https://forestsociety.org/events.

“The Forest Society is again pleased to partner with the NH Department of Natural and Cultural Resources, Division of Forests and Lands to co-sponsor this annual and popular, late winter lecture series at Fox Forest in Hillsborough,” states Dave Anderson, senior director of education for the Forest Society. “The Cottrell-Baldwin Environmental Lecture Series honors the environmental and scholarly legacies of Hillsboro residents Annette and William Cottrell as well as that of the State’s first Research Forester, Henry Ives Baldwin.”

Below is a summary of the four lectures.

Humans and Nature in the Monadnock region: The First 13,000 Years

Speaker: Robert Goodby author and Professor of Anthropology at Franklin Pierce University: “Humans and Nature in the Monadnock region: the First 12,000 Years”

Native Americans have lived in the Monadnock region for 13,000 years. Archaeological evidence from sites in Swanzey, Peterborough, Hinsdale, and Keene reflect their use of a broad range of terrestrial and aquatic animals, ranging from caribou at the end of the Pleistocene to anadromous fish and timber rattlesnakes during the Late Archaic and Woodland periods, c. 5,000- 700 years before present. Site settings show that major rivers, tributary streams, and wetlands were all integral to Native American economies. Archaeological data reveals Native use of the landscape and natural resources, highlighting settlement patterns, seasonal movements, technology, site settings, and responses to climate change. Archaeological data also contributes to an understanding of long-term patterns and changes in species range that has potential utility for modern conservation and wildlife management.

Dive into the History of Livermore Falls, NH

Join the New Hampshire’s Department of Natural and Cultural Resources archaeology team to learn the details of the archeological discoveries at Livermore Falls State Forest in Plymouth. This area was initially excavated to investigate post-Contact archaeological deposits associated with the 19th and 20th century industrial complex and associated residential occupation known as “The Hollow.” However, during their excavations a somewhat substantial Pre-Contact Native American archaeological deposit was also identified, including the discovery of a fire hearth radiocarbon dated to roughly 3,000 years ago. Learn the fascinating details of the site and how DNCR archaeologists uncovered heretofore unknown history at Livermore Falls.

Up for Grabs! Timber Pirates, Lumber Barons, and the Battles Over Maine’s

Speaker: Thomas Urquhart, author of “Up for Grabs! Timber Pirates, Lumber Barons, and the Battles Over Maine’s Public Lands.”

The origin of Maine’s Public Reserved Lands goes back to the 1780s when Maine was a part of Massachusetts. As a state, Maine continued the Commonwealth’s policy of reserving a “public lot” in every township sold off from its public domain. These lots (1,000 acres each) were to serve the future needs, especially religious and educational, of the town. They could not be sold. When wildland townships remained unsettled, the state could only sell the rights to cut the timber on the public lots. Lumber interests (and subsequently paper companies) bought the rights and managed the land as if it was their own. A century later, after a ten-year legal struggle, Maine recovered the public lots. They are now the core of its magnificent Public Reserved Lands, managed for timber, wildlife, and recreation. Join us to learn the story of how these tracts were re-acquired. With dramatic moments and colorful characters, Urquhart’s book weaves its way from 1820 to the present, providing an engaging and informative overview of conservation and preservation in Maine.

Join us for a presentation that includes music as well as scenic and historic photos from Maine’s ‘northern forest.’ Spectators will virtually canoe the world-famous river, discover forgotten logging history, and learn about Native American archaeology. Narrated by former Supervisor Tim Caverly. Hear first-hand about the lore, legends, and colorful characters that Caverly experienced during his 32-years while a Maine Park Ranger.