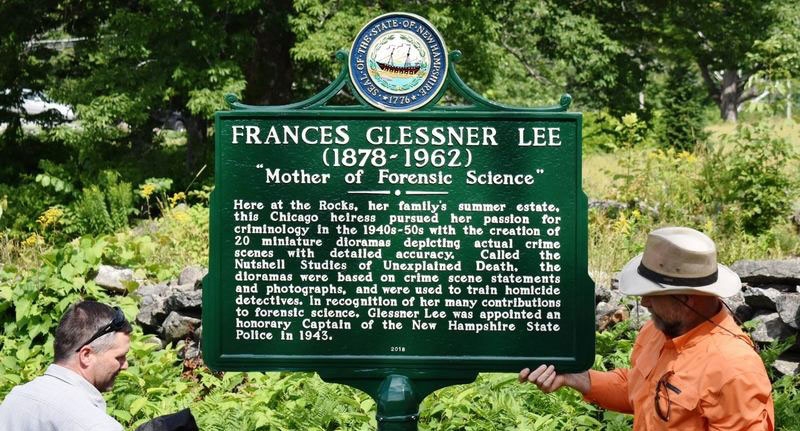 BETHLEHEM — Frances Glessner Lee’s dictum was “Convict the guilty, clear the innocent, and find the truth in a nutshell,” which she did on a scale of one inch to the foot.

Born into Chicago high society at a time when ladies didn’t go to college or have careers, Glessner Lee, according to the Bethlehem Heritage Society, created 20 meticulously detailed dioramas of real crime scenes, 18 of which are still being used as teaching tools by the Maryland Office of the Chief Medical Examiner, and which earlier this year were presented at the Renwick Gallery at the Smithsonian American Art Museum in an exhibit called, “Murder Is Her Hobby: Frances Glessner Lee and The Nutshell Studies of Unexplained Death.”

Described as the “mother of forensic science” and the inspiration for books and a TV series character, Glessner Lee — who lived from 1878 to 1962 — was honored Tuesday at The Rocks, her family’s former estate, with a New Hampshire Historical Highway Marker.

The unveiling of the marker, inside the triangle at the intersection of Glessner Road and Route 302, was the culmination of research that author and Bethlehem resident Michael Bruno did for his recently released book, “Cruising New Hampshire History: A Guide to New Hampshire’s Historical Roadside Markers.”

To finishing read this and other stories at the Union Leader, click below.