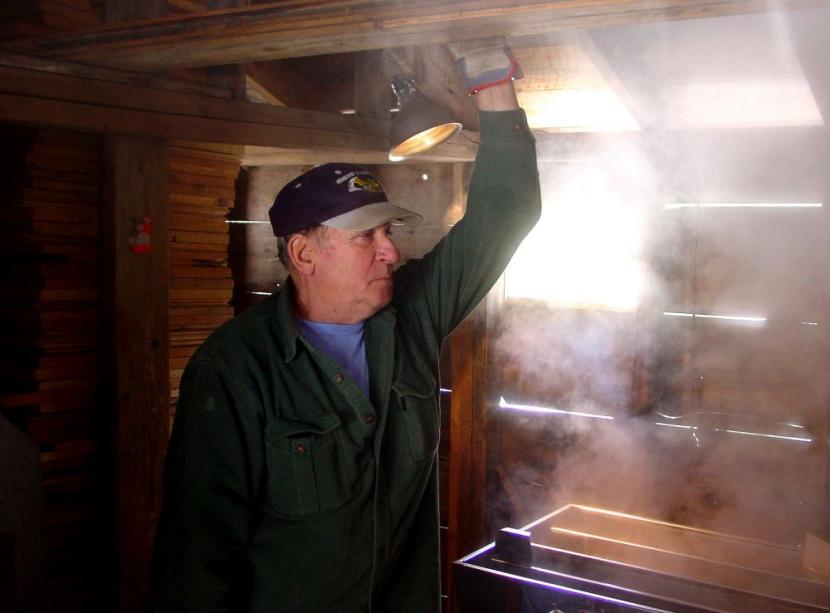 Charley Hosmer is matter-of-fact: "This is just a backyard deal. Some years, I'd boil all night and dad would boil all the next day just to keep up with it, you see." Photo Geoff Jones

Charley Hosmer shuffles out of his sugarhouse as I approach. He squints in curiosity and then relaxes in recognition. He ducks inside to check the boiling maple sap and I follow him. "How's it running?" I ask. 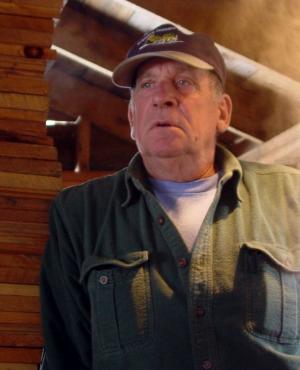 "Well - it ain’t really running a'tall - first it was too cold, now it’s too warm. The big trees - where the snow's melted away from the base - they was running pretty well earlier."

Hosmer has a classic Yankee accent. Rugged from a lifetime of hard work yet ever cheerful, Charlie is fit for his 60s. As a boy, he attended a one-room schoolhouse now owned by the Sutton Historical Society. Wearing work boots, work gloves and a ball cap, Hosmer is one of a handful of my neighbors who remember Sutton 50 years ago. 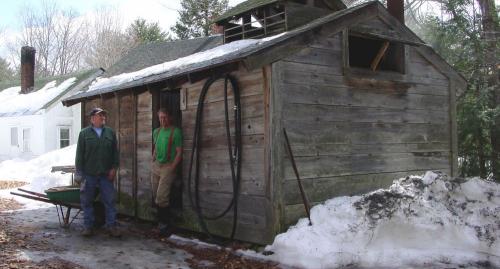 Hosmer’s sugarhouse is perfect. Small, rustic and surrounded by maples, it’s tucked behind the house where his parents lived. Lichens grow on its weathered roof beneath the wooden slats of the roof vent. Inside, it’s dim. Dry leaves that blew in under the door last fall cluster in the corners. Two shiny, steel evaporator pans sit atop a cast iron "arch" that contains the fire. Written on the pine walls are pencilled ciphers - dates of first and last boiling, and the gallons of maple syrup made - dating back to the 1960s. The sugarhouse smells of pine boards, wood smoke and boiling maple sap.

Hosmer is getting his rig set up - sweetening the pans with the season’s first run of sap. He lets the fire die down in the arch so the pans don’t foam and hiss the way they do over a rolling boil. Instead, they burble quietly as the maple steam rises, collects in the rafters and drifts out through the roof vent.

The first sap run is three weeks late. With little frost left in the ground, sugarmakers debate how long the season will last. Any attempt to forecast a sugaring season is futile. The duration of sap runs and the sugar content of the sap itself depend entirely on the weather and factors peculiar to the trees. The time to discuss the merits of a given sugaring season is after the taps are pulled. 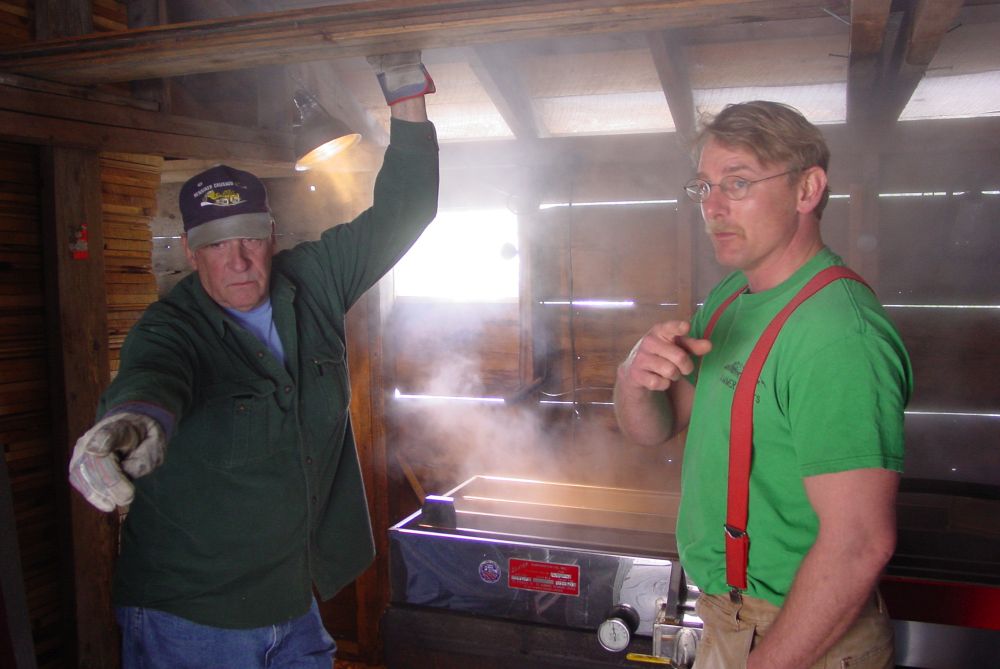 "Ask me again in April" is the standard reply to questions about sugaring prospects.

Maple sugaring is a timeless ritual that takes a lot of work. It’s almost pointless to calculate profits with respect to the time and physical labor required. As one sugarmaker puts it: "It’s one helluva lot of work for nothing. It’s not so much a business as a disease!"

Sugarmakers say they can’t wait to get started sugaring by late winter. But once the sap starts running "like a hammer to hell," they confess they can’t wait to pull their taps and wash up. One told me: "My dad always said when the Lord made men for maple sugaring, he first give ‘em a spine of steel… then took out half their brains!"

I’m still not sure if March maple madness is a symptom of spring fever or the ultimate antidote. A "spring tonic" is an old-fashioned term for when warmer weather provides the excuse for mischief. Years ago, another neighbor tapped a telephone pole and hung a sap bucket on it. Folks in the village debated whether it was a joke or whether he was drunk. Winter’s end is reason enough to celebrate. That particular sugarmaker gave up both sugaring and drinking years ago. No coincidence I suppose.

Hosmer doesn’t remember exactly how long he's been sugaring. He recollects he and his father built the little sugarhouse in the late 1950s. He does remember specific years when the sap ran early or ran late.

"I remember one year we tapped on the 28th of February and we was all done, washed up and the sugarhouse locked by March 3rd" he recalls. "I think some guys tap too early now. We get a warm spell around President's Day and some guys tap and then don’t get another drop. Dad was a good one for town meeting. Every year, town meeting day was when we'd tap, give or take a few days either way, don’t you know."

With 125 to 150 scattered maple trees, Hosmer still collects sap the old-fashioned way using buckets rather than plastic tubing. It takes at least 40 gallons of raw sap to make one gallon of finished syrup and Hosmer makes 30 to 40 gallons of syrup each year.

Times are changing, but syrup prices haven’t. The price per gallon hasn’t risen and an increasing supply of Canadian maple syrup keeps prices paid to small New England producers low. Some sugarmakers grumble that the maple factories of Quebec are government subsidized and that they can’t possibly compete.

"This is just a backyard deal" Hosmer reminds me. "Some guys will have one good year and start getting greedy. They start thinking about tapping 25 or 50 more trees the next year and then it gets to be too much for them."

In spite of these grim realities, I still have naïve, romantic notions about building my own sugarhouse. Hosmer warns me that I won't break even on the investment in a new evaporator for decades. "If you was to buy yourself a new rig now, you wouldn't make a profit till you were nearly my age." he offers. I ask Hosmer why he bothers with sugaring.

"Well, it's just to fill in between winter wood season and spring work" he says. "I'm done delivering firewood now and I can't truck now because the dirt roads are all posted with mud season. I only make a few gallons a year to sell or to give away as presents. I wouldn't want to get into it too seriously or to have to pay the bills with what I make out here. It's just some work to take me through mud season."

I spy his father’s spidery handwriting on the sugarhouse wall. Hosmer’s dad was a much-loved town clerk. He performed the duties at his kitchen table, pecking out car registrations on an ancient manual typewriter.

"Do you think about your dad when you’re out here?" I ask.

Hosmer’s face softens as he smiles. "I guess you could say that." Then he snaps matter-of-factly: "Of course, this is just a backyard deal. Some years, I'd boil all night and dad would boil all the next day just to keep up with it, you see."

"It used to be a lot of guys would have little backyard operations going and they’d say ‘Come over and have a beer,’ and they'd be boiling sap, you see" Hosmer says. "Tell you what - you drive by here now later this week and you see steam coming out? You stop back in then."