The Wings of Spring 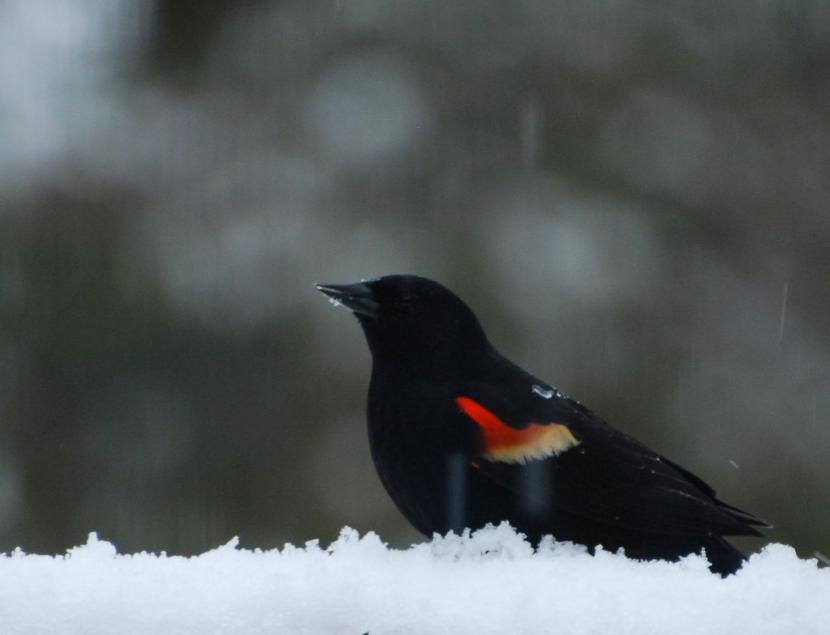 To the Thawing Wind

"Come with rain, O loud Southwester! Bring the singer, bring the nester…" - Robert Frost, from A Boy's Will 1913

Weary of hauling maple, ash and oak to the woodstove by late winter, I pass beneath a fragile nest of moss and mud perched in the eaves of the woodshed. I look at the phoebe's nest and feel the pulse of spring; I imagine a distant rising tide of birds winging their way north toward a still-frozen New Hampshire landscape outside. And I wonder: where is the nest-maker now?

March weather remains fickle and uncooperative even as familiar winter chickadees, titmice, nuthatches and cardinals at the feeder are joined by ever-increasing numbers of blue jays, mourning doves and starlings arriving in the village. Redwing blackbirds "con-ker-eeet" from a frozen cattail marsh, robins probe the edges of melting snowbanks and killdeers begin shrieking in muddy ski area parking lots and sodden pastures. The earliest arrivals on the wings of spring confirm winter's demise and add faint strains of bird song and rude, whistled call notes as the orchestra tunes up prior to the opening of the spring symphony. 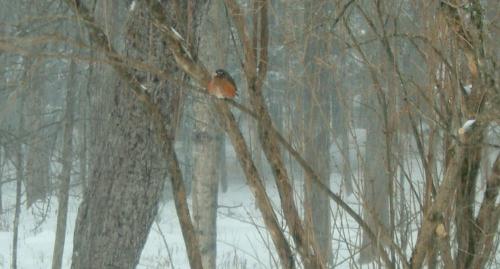 In the forested hills of New Hampshire, I anticipate new arrivals with every whiff of wet, spring earth. I imagine a tropical forest landscape to the south where an individual bird – my bird – carries a woodshed firmly lodged in its navigational computer. While standing outside in the cold morning light, I wonder if the journey has already begun and whether there is a reciprocal longing in the mind of my phoebe.

Neotropical migrants begin to move en masse on clear, starlit nights, navigating by internal compass mechanisms not entirely understood. The alignment of the stars, the position of the sun and possibly the earth's magnetic fields and familiar landmarks orient and guide birds on the journey north. They stake their very lives on innate and ancient instincts, reading subtle cues to each season. As impressive as salmon spawning in a rushing river, fragile feathered migrants endure tremendous metabolic hardships covering vast distances, crossing hundreds of miles of open water in the Caribbean and off the coast of Mexico during the annual migration.

In March when the phoebe alights at the top of the highest sugar maple at the edge of the pasture, it will sing its way up the brook, drawing nearer to its ancestral family home, a mossy nest cradled under the eaves. The phoebe will sweep down to its favorite summer perch, pump its tail and utter a familiar, buzzy phrase not heard for many long months: "Fee-bee!" 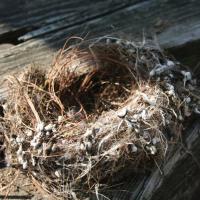 Phoebe annually undertakes her arduous journey of a thousand miles to the very spot where she was born – a joyous homecoming, a triumph of instinct. The annual milestone marks the return of my summer alarm clock, all the local birds who sing at daybreak outside the open bedroom windows for a few short months in spring and early summer.

Phoebe isn't alone. Her return is multiplied tens of millions of times across the northern forest as spring progresses. Peak nights of spring migration are termed a "fallout" when a warm front advances from the southwest and birds tumble into New England forests from the night sky. Avian arrivals seem to occupy every branch – dozens of species, millions of individuals. They snatch blackflys from the air and glean tiny spiders and aphids from unfurling maple flowers and pick at fir cone seeds in lichen-festooned, mountain forests. Each acre hosts a complement of breeding birds: warblers, wrens, woodpeckers, thrushes, thrashers, titmice, flycatchers and flickers, sparrows and swallows. They feed, sing, begin aerial courtship displays and launch spirited territorial defense prior to mating, building nests and laying their eggs.

The sheer number of birds returning to my forested valley is mind-boggling. Hundreds of warblers, perhaps thousands will breed and raise their young within a few miles of where I sit gazing, dreaming and multiplying unfathomable bird densities. Tens of thousands of warblers I'm sure will move through my valley before too long.

Beyond the local mountain peaks – Monadnock, Lovewell, Sunapee and Kearsarge – rise the Green Mountains in Vermont and Berkshires of Massachusetts. To my north beyond Ragged and Cardigan, lie the Belknap, Ossipee and Sandwich ranges of the Lakes Region, Franconia and Crawford Notch, The Presidentials, Carter-Moriah, Pilot Range and Mahoosucs. Across a vast twenty-six million acre Northern Forest stretching from upstate New York to northernmost Maine and into the Canadian Maritime Provinces, my calculations of migrating bird densities breaks-down. Farther than the eye can see on the clearest of cloudless days, lie millions of acres of forests, fields, bogs, wetlands, lakes, rivers, and alpine terraces of mountain peaks soon to be brimming with birdsong!

Each migrant bird has a destination: a mountain or river valley, an individual tree branch upon which it intends to build its nest, lay eggs and raise young. The survival of their race ultimately depends on the conservation of their preferred habitats – a few thousand acres here, a few hundred more acres there. The vast tapesty is woven of millions of individual strands. The spring migration is a powerful reminder that we are caretakers of the birds' summer homes. We are stewards of this forested landscape. It does not belong to us alone. We have obligations to unseen neighbors and future generations.

That's what I think about as late winter daydreams lead back to anticipation of a single phoebe, aglow in spring sunlight, perched on a branch of a gnarled, old sugar maple, head thrown back against the sky, singing.