When Foliage Fades... and Leaves Have Left. 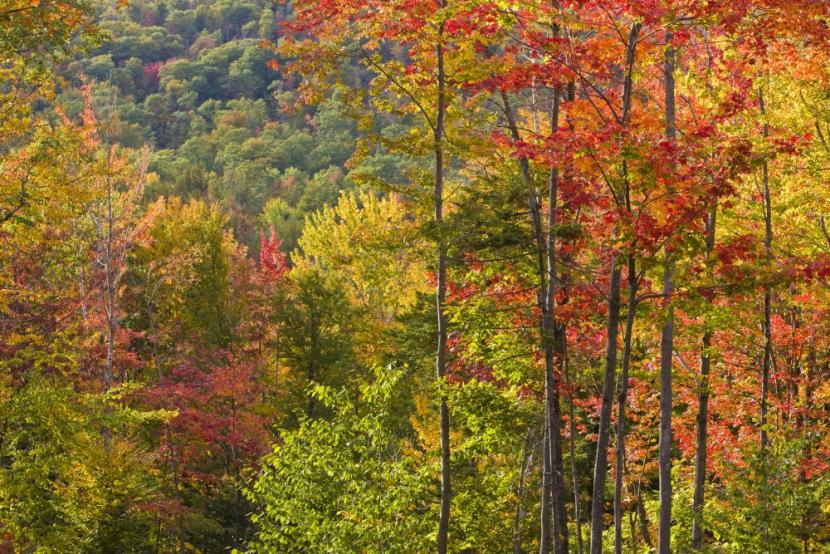 What changing fall colors reveal about the underlying granite landscape

Broad-leaved, deciduous hardwood trees lose their leaves every year. Evergreen, coniferous softwood trees do not. But why?

Behind the impressive economic engine of regional tourism, spectacular scenery, and the cultural phenomenon of New Hampshire’s fall foliage industry lies basic plant biology: an industry unto itself.

In North Woods: An Inside Look at the Nature of Forests in the Northeast, Ecologist and Author Peter J. Marchand offers a factory metaphor to explain the “evergreen advantage:”

“Think about plant growth in economic terms. Imagine a living plant as operating under the same constraints as any manufacturing business. In both cases (hardwood or softwood), operating capital is invested in new machinery (leaves or needles) with the expectation of realizing a reasonable return on the investment. If working capital (soil nutrients) is in short supply, this machinery may have to be kept in service longer to maximize the investment return… The hard reality here is that only those with surplus capital can afford to reinvest regularly in new machinery.” 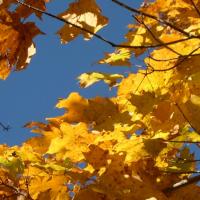 In Marchand’s factory metaphor, nutrient capital in the underlying soil bank (or the lack thereof) “finances” which trees best compete on a given site. Where nutrients are in short supply, evergreen needles, although less efficient at capturing sunlight to manufacture sugars, are a better infrastructure investment that yield a longer return on investment over several years. Evergreens conserve soil nutrients, giving them the “advantage” Marchand describes. That advantage is lost on better soil sites where broad-leaved, deciduous trees live the more nutrient-intensive lifestyle they can well afford.

An obvious exception each September is red maple or “swamp maple,” which has adapted to a wide range of conditions including life in wetlands. On wet sites, red maple exhibits stress. It is among the very last hardwoods to leaf-out each spring and also among the first to lose its leaves, often turning scarlet by Labor Day. In August people are alarmed to see red maples changing. But that’s their nature. Call it a warning shot across the bow of late summer. 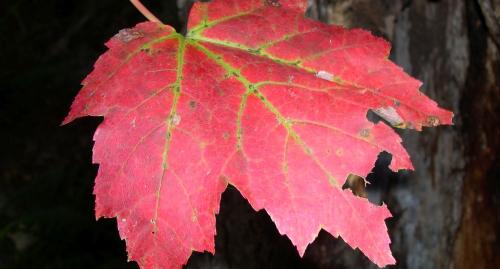 Hardwoods generally out-compete softwoods on rich sites. The reverse is true on nutrient-poor sites: outwash plains of sand and gravel, saturated wetlands, shallow soils on ledges amid outcrops of granite, at higher altitudes, and in acidic peat bogs where softwoods win by default. To use a simple garden analogy: white pines are carrots—practically capable of growing from sand. Sugar maple, white ash, basswood, and butternut are rich site specialists like pumpkins, preferring a well-composted moist loam—the best real estate of the veggie garden.

The busloads of White Mountain “leaf-peepers” are actually admiring a mere skin of trees stretched tautly across thin soil deposits and the rock-ribs of New Hampshire.

In a time-lapse sequence of autumn foliage color advancing in September and fading to bare branches by November, color skips from the lowland maple swamps to the highest sub-alpine forests of white birch, beech, and sugar maple in the White Mountain region and then descends to the warmer valleys of oak and pine. Autumn colors descend local hillsides while collectively descending the entire state from north to south. 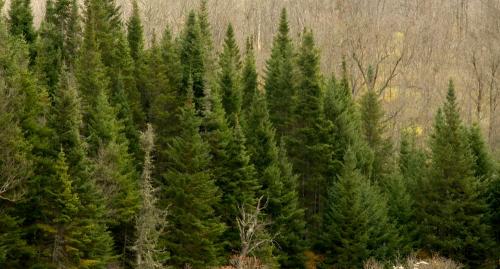 From the aerial perspective of thousands of migrating broadwing hawks spiraling south along ridges of the Monadnock-to-Cardigan highlands each autumn, fall foliage must provide a kind of road map. Subalpine belts of red spruce and balsam fringe the bald granite pates of our White Mountain summits. White pines may indicate underlying sand, gravel, or ledges where soil is shallow over granite bedrock. Fringes of wetlands, acidic bogs, and ravine communities are similarly cloaked in conifers—pines, tamaracks, and hemlocks respectively. Ravines located on steep slopes conduct invisible streams of heavier, cool air flowing under the hemlocks, which favor the acidic soil and cold, damp micro-climates found along seasonal brooks.

In most conifers, complete replacement of all needles can take five years or more with pines typically losing 20 to 25 percent of their needles annually. Meanwhile, the tightly furled maple buds have already borrowed heavily from the soil nutrient bank for a new array of solar panels, the photosynthetic machinery they will need again next spring.

During the riot of autumn colors, watch the relative proportion of dark evergreens to surrounding bare hardwood branches on your local forested hillside. If the land use history of farming or logging is comparable, you can ascribe the stark color differences to the relative “credit rating” of the local soil nutrient bank. When bleak November arrives, the shivering, naked gray hardwood branches reveal where the soil bank finances replacement of broad leaves while the frugal conifers make do with the same waxy needles.

Naturalist, Dave Anderson is director of education and volunteer services for The Society for the Protection of New Hampshire Forests. He may be reached via e-mail at danderson@forestsociety.org or through the Forest Society’s web-site: www.forestsociety.org.