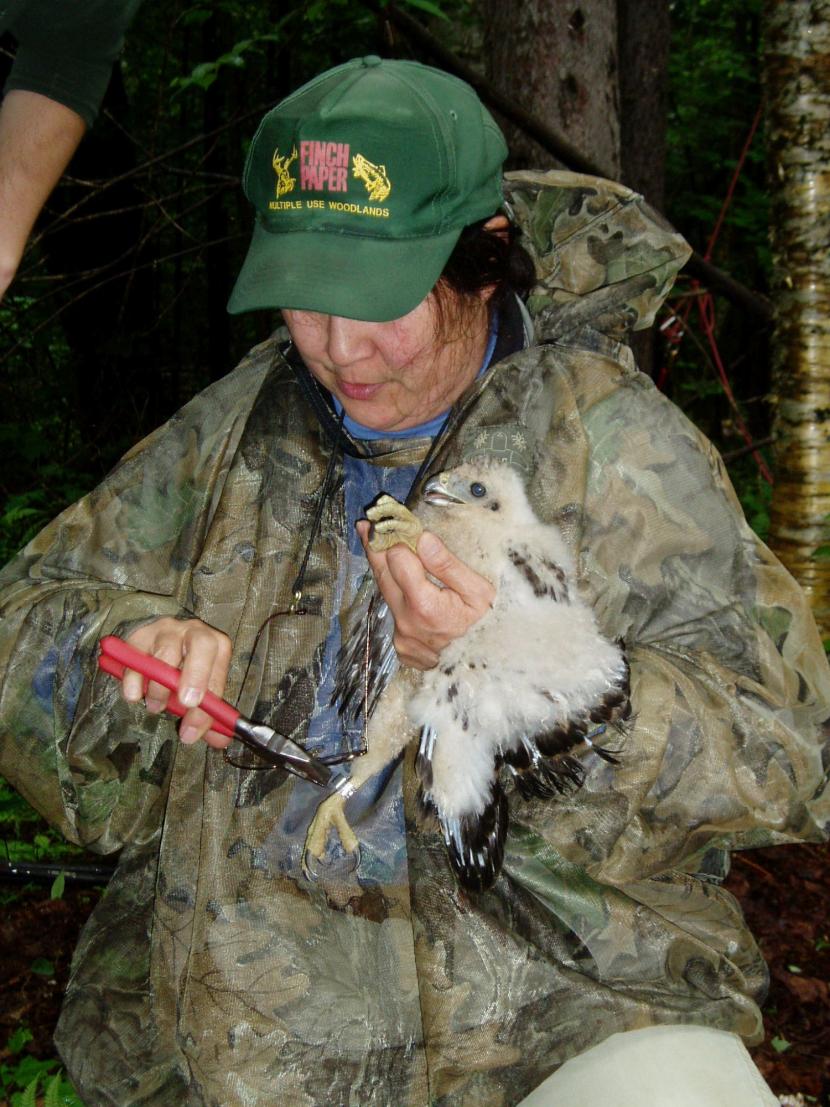 While it's still too early in this multi-year study to draw any conclusions, researchers hope that vegetative inventories surrounding nest sites will reveal a pattern of preference for specific forest types and structural habitat features. Courtesy Mariko Yamasaki, USFS

The crew grew quiet as we approached the nest. They whispered and walked slowly, carefully scanning the tree tops overhead and behind them. At the snap of a dry twig underfoot, a goshawk leaped from the rim of its nest and screamed "Kak! Kak! Kak!" as it circled above the pines. I froze instinctively and ducked with shoulders hunched. I wanted to leave immediately.

A team of US Forest Service (USFS) wildlife biologists, biological and forestry technicians, and volunteer interns is conducting research on Northern goshawk nests and habitat preferences in New Hampshire. Among active goshawk nest sites located outside the National Forest, two are on Forest Reservations owned by The Forest Society.

In June, the goal of the USFS team is to trap and band adults and their chicks if possible. Trapping hawks is complicated and potentially dangerous. Goshawks are the largest of the three woodland hawks known as "accipiters." They're extremely aggressive in defense of a nest, often attacking intruders on the ground more than a hundred yards away. There's a narrow time window in which to band chicks. Nestling goshawks can be banded as early as fourteen days after hatching, when their legs are more fully developed than the rest of their bodies. Banding must take place before thirty-four days of age when nestlings "branch out" on limbs and become active, flapping their wings in preparation for flight which occurs between thirty-eight and forty-two days of age. 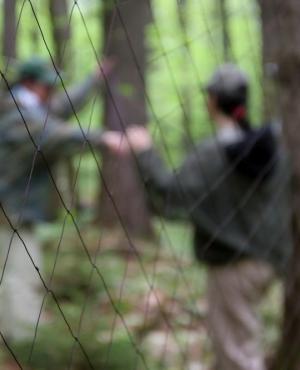 In a display of self-sacrifice reminiscent of "helper Jim" on "Wild Kingdom," wildlife intern Ben Brightrall volunteers to be the hawk bait. Lying on the ground near the base of the nest tree, he is covered with camouflage netting while wearing a helmet, safety glasses and a leather chest protector. He holds a plastic, bobble-head owl decoy and a portable CD player attached to a small speaker. Panels of nearly-invisible mist net are hung from paired steel poles surrounding Ben. In response to a recorded owl call, the goshawk will hopefully dive to attack the owl decoy on the ground and fly into a net designed to collapse, catch and cradle the hawk.

Mariko Yamasaki is the USFS research wildlife biologist who works on a variety of species, including forest raptors, and forest habitat management issues. With the owl decoy in place, Mariko ducks into a camouflaged blind set up days in advance to acclimate the hawks to its presence near their nest. Volunteer field assistant Gary Getchell starts a hidden video camera as the rest of the crew makes a loud, conspicuous retreat. A hawk circles overhead, calling angrily as it escorts the intruders away from the nest toward a pickup truck parked several hundred yards away.

At the truck, Jon Janelle sorts gear: climbing ropes, harnesses, helmet, ascenders, a spool of bright yellow cord and a hard plastic case containing a giant slingshot on a telescoping pole. Jon is a USFS forest technician and a certified tree climber. After fifteen minutes, Jon begins pacing, pre-visualizing his anticipated climb and listening intently. "I hear the owl" he says. At the nest, Ben has begun playing the recorded owl call. I feel like Marlin Perkins waiting at the truck while back at the nest, Ben tries to incite an angry hawk to land on him.

I was once chased from the woods by an angry goshawk. By Mariko's standards, I wasn't actually attacked – the hawk didn't knock me to the ground or draw blood. Gary Getchell has been attacked. He winces and puts his hand on the back of his neck as he tells me.

The pitch and intensity of the hawk's calls increase. "What's happening?" I ask. "There are two birds now – the male must be back, too" Jon replies. I sense that's worrisome. Then Mariko's voice crackles calmly over the radio: "Got her." The crew snaps to attention, picks-up equipment and walks briskly back toward the nest. 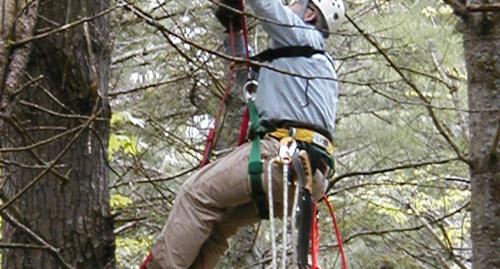 "I hope they trapped the female" says Jon as we arrive. Females are larger and more aggressive in defense of nestlings than males. He'd rather know exactly where she is when he climbs to retrieve her nestling. Jon unpacks the slingshot and shoots the yellow cord over a thick limb high above the nest. Another hawk circles above the nest where a lone chick hunkers down. Jon slips on his climbing harness and clips into ascenders. He's ready.

At the nets, Mariko and biological technician Angel Karedes untangle the hawk and cover its eyes with a leather falconry hood. They clip netting away from the hawk's talons. The huge yellow legs are held firmly to prevent the talons from grasping a wrist or palm. Gary has a scar on one hand which attests to that experience. "Looks like a male, Jon" says Mariko teasing "but go ahead and climb." Angel measures the captive hawk's leg diameter with a special gauge. Size 7B – it's the female.

Mariko holds the hawk as Angel crimps a shiny US Fish and Wildlife Service aluminum identification band on her right leg and a green aluminum research project band on her left leg. The green band identifies the goshawk as a female; black is used for males. Researcher Chris Costello records identification numbers and the weight of eleven hundred grams in her notes. Mariko inspects the hawk's wings and tail to be sure her collision with the net didn't damage any feathers. They put her in a plastic cat carrier in a quiet place and wait for Jon to lower a nestling.

Jon methodically ascends the rope that runs over a limb and is anchored to a nearby pine. Just as he reaches the nest, a hawk sweeps past the back of his head and circles into the surrounding pines. "Holy crap! – what was that?" "That'd be the male" says Gary softly. John puts a fuzzy, white nestling goshawk in a canvas shopping bag clipped to a cord and lowers it to the team below. 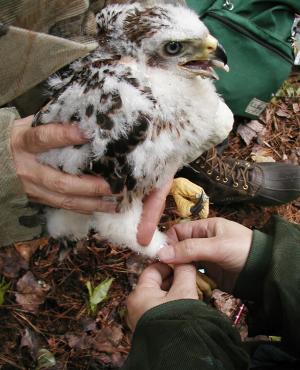 The nestling is frightened and alert, blinking and panting. Mariko and Angel work quickly and speak softly. Gary uses a spray bottle to mist water into the chick's beak and onto its legs, keeping it cool and hydrated while they band and weigh it. Usually nestlings have developed sufficiently by day fourteen to permit identification bands to be placed on their legs. Chris takes note of the nestling's physical appearance: weight, leg size, feather development and plumage characteristics help to determine a chick's age and gender. Gary takes digital photos for later analysis. The whole operation takes less than five minutes and then the chick is returned to Jon, perched at the rim of the nest.

The team packs equipment: climbing ropes, nets, poles, the blind, the plastic owl decoy and CD player. The last step is to free the captive female hawk. "She's up!" says Gary as Marko removes the leather hood and tosses her gently into flight. I look nervously over my shoulder as we hike away from the nest as fast as we can.

While it's still too early in this multi-year study to draw any conclusions, researchers hope that vegetative inventories surrounding nest sites will reveal a pattern of preference for specific forest types and structural habitat features. Nesting goshawks readily utilize second and third growth forests common in New Hampshire. Nests are often located in white pines adjacent to small openings in the canopy such as those created by logging. According to Mariko Yamasaki, the research should result in a series of best management practices to insure that the working forest continues to provide nesting habitat throughout the goshawk's range.