Beware the Ground-Nesting Hornets of Fall

Step too close and they’ll treat you like a predator hunting their larvae – ouch!
Dave Anderson
Wildlife 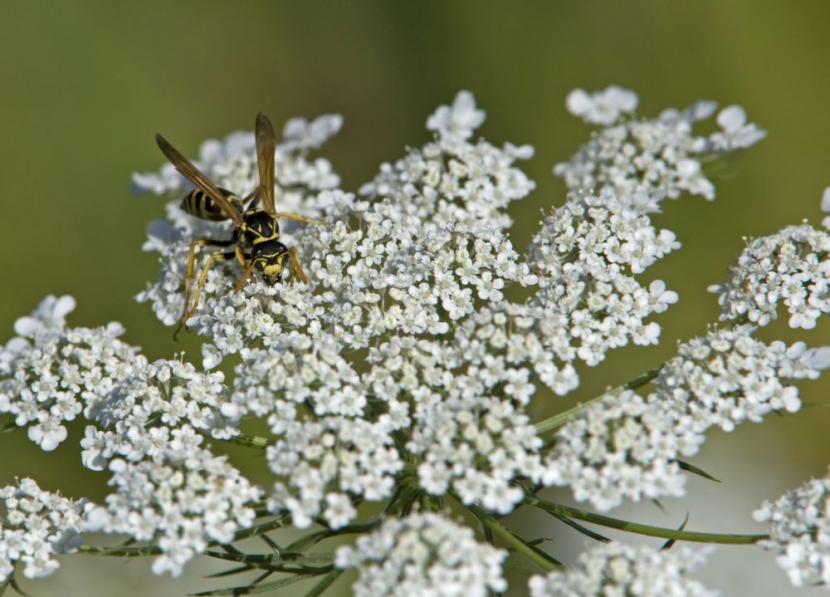 Yellow jackets look docile enough while gathering pollen, but when defending their ground nests full of larvae in the fall, they will attack unsuspecting passersby aggressively. Photo: James Boardman/Dreamstime.com

Often built in mouse or mole burrows, papery hornet nests are packed with nutritious, fat and protein-rich larvae. These grubs are defended aggressively by agitated seasonal workers that will soon scatter and lie dead at dawn after a first hard freeze.

Yellow-jacket hornets are an important early autumn food source for some insect-eating mammals: most often black bears and skunks. By night, skunks and black bears patrol our pastures and even suburban lawns sniffing for hornet nests and unearthing the tasty hornet larvae. By dawn’s light, the evidence includes a wreckage of an unearthed and shredded gray paper nest with dead hornets whose spent stingers had pulsed in the thick fur and skin of nocturnal raiders.

Adult yellow-jackets swarm aggressively in collective defense of nests at the slightest provocation. Ironically, hike leaders who stomp past unseen nests are generally spared as are slower hikers in the back of a line. The unfortunate folks hiking in the middle usually bear the brunt of the aerial attack. The scent of stinger venom further infuriates hornets who seem suddenly as thick as mosquitoes. The standard operating procedure is to run and holler: “Bees! Run!”

Of course you don’t really need to tell people to run. After an initial moment of confusion and surprise - a sort of delayed perception - neurons register the pulse of intense pain and a sudden conscious awareness of the terrible swarm of stinging insects. The instantaneous innate response is to run in cartoon-like cliché: hands waving while pursued by the angry swarm. It’s only funny later on.

We once disturbed a large, active underground hornet nest located beneath a loose rock in the middle of a heavily-used Mount Monadnock hiking trail. Several hiking parties on the summit related a similar painful experience. It’s a small wonder there were any hornets left with stingers intact by the end of that day. As a public service during our descent, we scrawled and posted crude warning signs on both approaches - from above and from below. The signs read: “Bees. Run!”

That also seems funny to me now – in hindsight.