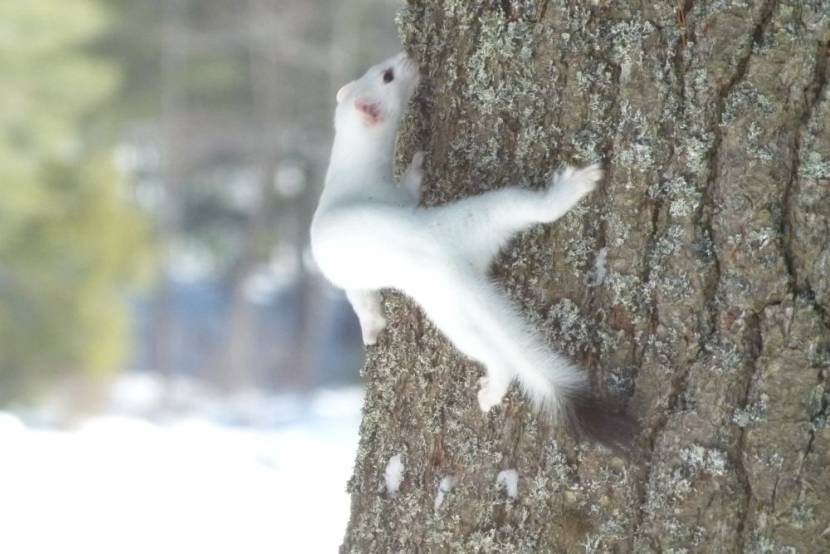 This ermine was photographed chasing a squirrel near Pleasant Lake in New London. Photo Tom Stark

It's officially now March. Perhaps Nature's snow-gun show will cut us a break? Unless the old "In like a lion" cliché holds true?

"Out like a lamb" may not be much better. I've attended a malpresentation birth of one lamb arriving in March in a snowstorm with legs bent akimbo. Either way, March can be as fitful and unpredictable as winter itself.

Even crusty swamp-Yankees exhibit snow fatigue. We're all getting a tad chippy in the fourth quarter when the scoreboard reads 43 inches of snow in February alone and temperatures remained knotted near zero during the coldest February in 145 years.

All the thermostat fidgeting, wood-hauling, shivering, shoveling, icicle-smashing and roof-raking justifies grumbling, even before the February plowing bill has arrived.

Well, suck it up, cupcake! Few of us are likely to die due to deep snow.

That's not true in the woods where the snow depth is 23 inches, according to the NOAA website. It's safer to call it knee-deep or thigh- to waist-deep where it has wind-drifted. For wallowing wildlife, the cumulative expense of winter survival might be far steeper than our plow bill.

I queried some wildlife experts at New Hampshire Fish and Game to determine winners and losers in deep snow at this stage in the game, the final quarter... 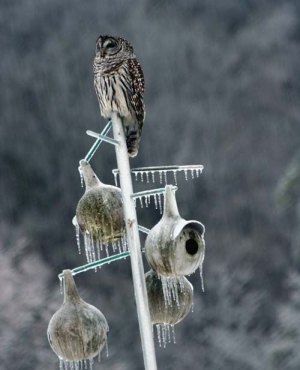 At Squam Lakes Natural Sciences Center, naturalist Eric D'Aleo related how a neighbor called reporting a barred owl trapped in a shrubby maple with a dead crow affixed to its talons. Crows harass owls. The owl, feathers matted with crow blood, apparently killed the crow but remained grounded near a birdfeeder. The owl was rehabilitated and released. The local crows protested.

Not all owls have been as fortunate. I spotted a dead owl on shoulder of Interstate 93 this week. Hungry wildlife venture out of their preferred habitats. 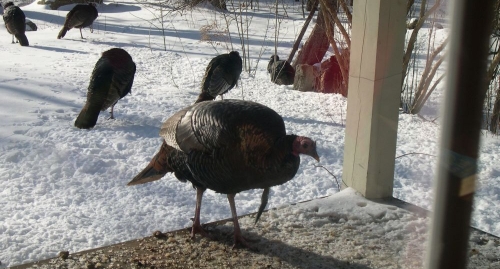 Turkey biologist Ted Walski says turkeys suffer in soft, deep, powdery snow. Their weight and large breasts cause turkeys to frequent roads or driveways or stay on roosts, to avoid having to plow through deep powder. Fortunately for turkeys, they carry fat stores that allow them to fast for a week or so, depending on age and size. Turkeys may simply stay on roosts near food sources and periodically fly down to feed and then back up to the security of the trees. Home ranges shrink to a few acres. When snow hardens the turkeys resume normal walking routines, covering upwards of a square mile by contrast.

In the absence of a snow crust, turkeys remain on roosts to the point that some drop dead of starvation. Turkeys gather at bird feeders and silage and manure bunkers at dairy farms; a fact not lost on coyotes and bobcats who hang around waiting for a turkey dinner to come to them

Predators including red and gray foxes, coyotes and bobcats have difficulty traveling in soft snow or pouncing to reach rodents. Temperature fluctuations or rain might create a snow crust to favor predator travel, but not hunting success.

Bobcats are hanging around under porches and near birdfeeders. Coyote tracks have been scarce. I witnessed one lean coyote scavenging in broad daylight at Bear Brook State Park this week. Social media photos reveal predators drawing closer to homes. It's a good time to keep kitty indoors, advises Walski. 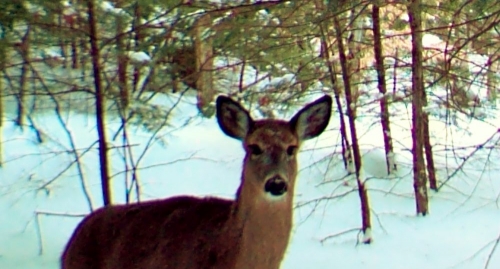 Fish and Game deer project leader Dan Bergeron reminds that deer are near the northern limit of their range and winter weather is one main limiting factor to population growth. Winter Severity Index data is collected through April. Severe weather and deep snow extending into the spring has a bigger impact as deer have used up most of their energy reserves at that point. If melting occurs quickly, snow and cold do not have a big impact. However, March and April conditions can increase deer mortality; it's too early yet to say what will happen.

Deer remain in winter "deer yards" under a thick canopy of conifers where snow depth is reduced. From south to north these trees include cedars, pine, hemlock, spruce and fir. Adequate amounts of deer-wintering forest habitat ensures more deer survive during winters of above average severity.

Biologists discourage supplemental feeding of deer, citing negative consequences. Deer voluntarily reduce winter food intake and daily activity to conserve energy. Feeding draws deer away from critical habitats and causes them to burn excess energy. They travel near or across roads to get to these feed sites, and they get hit by cars. Feeding deer the wrong type of food for their winter intestinal flora can actually cause death. And concentrating deer at feeding sites increases risks of disease transmission.

Furbearer biologist Patrick Tate is ambivalent about the snow-related fortunes of weasels and beavers. Beavers, otters, mink and muskrats are not directly affected by snow depth. However, prolonged winter cold and thick snow can be problematic for beavers as they exhaust their winter food supplies beneath the ice. Starvation can occur if a beaver colony loses access to submerged aquatic vegetation or nearby deciduous trees above water, adjacent to ponds. 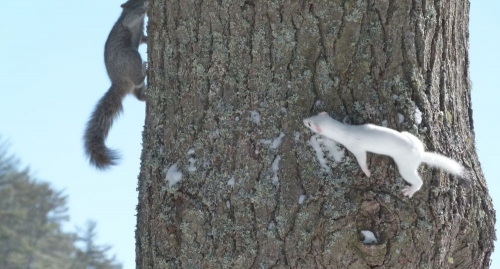 Other weasels - ermine, mink and fisher - are all fairly well-adapted to burrow in deep snow and are adept at hunting prey. I received photos of a handsome ermine - winter white with black tail tip - chasing a gray squirrel around a large pine. It was no barber pole game. If the squirrel had gone to the ground, it would have lost. Instead it pressed its natural advantages of a wide chest cavity and tree-circling skills to exhaust the hungry weasel.

Rodents will survive. Mice, voles, chipmunks, red squirrels - all are well-insulated by snow at ground level in burrows. The heavy oak acorn crop and good second-year pine cone seed crop will keep them well-fed. Like the "Three Little Pigs" in a house of brick, it's a good year to be a mouse but harder to be the big, bad fox.

Bear biologist Andrew Timmins has few concerns regarding snow loads for bears safely tucked away sleeping in winter dens. Instead, he cites a few advantages. First, increased snow over denning bears likely decreases den disturbance. During open winters with little snow there are higher rates of den disturbance by humans, which can become an issue when young cubs are involved. Secondly, abundant snow helps prevent spring and summer droughts and that can result in good growing conditions for acorns and beech nut crops.

Snowshoe hares are winners. They blend into the snow and are reaching higher sources of food, browsing higher and nipping twigs above the snow. They nestle into comfy "forms" in thick cover and are generally light enough to travel above the snow while their principal predators wallow. Red and grey foxes are compromised during deep snow years when prey sources can burrow under the snow and remain secure.

Ruffed grouse are winners. Grouse have taken advantage of the deep powdery snow for snow roosts-great for keeping them warm and hiding from avian predators. Basically, they plunge underneath the snow at dusk and remain concealed until dawn when they return to the canopy, nipping nutritious buds and eating dry catkins of their preferred birch and aspen trees. Snow provides thermoregulation and cover from predators.

Predictably, the northernmost species are true winter specialists. According to Jillian Kilborn, Fish and Game wildlife biologist in Lancaster, both pine marten and lynx have exceptionally large feet in proportion to their overall body size giving them an advantage in deep snow conditions. Marten are specifically adapted to hunt under snow. Their relative success in northern forests of spruce and fir is due to decreased competition from species that experience limited mobility in deep snow: fisher, bobcat and coyote. Over the past ten years, Fish and Game has actually been documenting an increase in the presence of both northern species in New Hampshire.