Where holiday spirit grows on trees 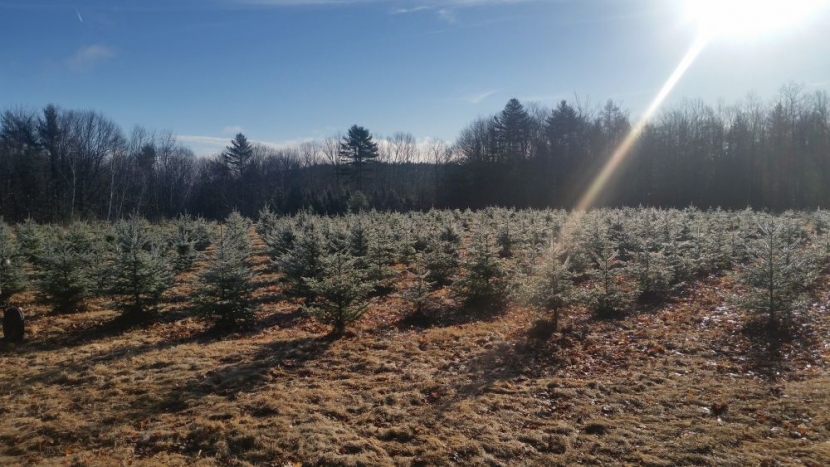 A new plantation of spruce and fir at Carbee Farm in Greenfield, where Christmas Trees were first planted in 1947.

After shelling-out $50 or even $100 bucks for a fresh, locally raised Christmas tree, ever thought about planting a dozen backyard balsams of your own? Or maybe you already started figuring, calculating what two hundred trees per year will fetch at retail prices. How hard could it be?

Experienced Christmas tree grower, Hunter Carbee chuckles. “Many people first plant Christmas trees thinking they’re going to slice a fat hog. When driving around, check out older farms throughout New England. You often see stands of sixty-foot tall over-mature balsam firs at the back of a field. Well, that same thing happened to us…”

Carbee’s grandfather, Roland bought a dilapidated farmhouse and 65 acres of pine timber on East Road in Greenfield back in 1936. Roland was an army veteran who returned from fighting in the trenches of France during WW I with a savings of $1800. He scratched up $400 more to make the original $2200 purchase. Just two years later the Hurricane of ’38 blew down most of the mature pine timber and blew the roof off the barn. It could have provided the opening to a country music song. Welcome to farming!

Hunter’s dad, Sheldon Carbee and his brother-in-law, Uncle John Blackwood planted the first Christmas Trees in 1947. Blackwood had graduated UNH in 1940 with a degree in forestry and worked for the NH Division of Forests and Lands. Together, Hunter’s grandfather, father and uncle maintained the small, family-run Christmas tree plantation with a goal of providing Christmas cash and to help defray future college education expenses for the soon-to-be born Baby Boom generation including Hunter.

For thirty years, the farm’s Christmas trees required weekend maintenance and provided modest holiday season income to supplement the family’s primary business. Roland had purchased the Hopkins and Belcher general store in downtown Greenfield and operated it as Carbee’s Store for 60 years. Hunter explains “my parents had to concentrate on the store and didn’t have time to expand the tree farm, but dad still planted trees here and there as he simply loved selling them.” In time, the plantation thinned and trees were overgrown. 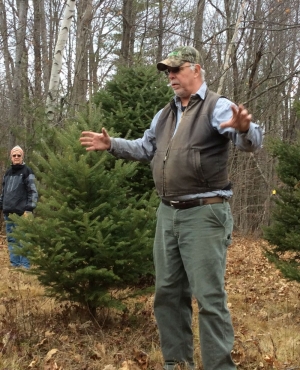 Now the third generation of Carbees are working the land. In 1987, Hunter began resurrection of the Christmas tree plantation, clearing land behind the farmhouse with his friend, logger Donny Hardwick. After planting two new plantations, Hunter started culling overgrown trees from a field opposite the house and clearing more former pastures and burning brush. In 2008 as part of a white pine timber harvest on the adjacent woodlot, they cleared 2 new acres of fields to expand the Christmas tree plantation. Two years of site preparation followed before Hunter planted 1400 more trees with a goal to eventually sell 200 trees per year. By 2011, he sold 50 cut-your-own trees.

Today, the 65-acre Carbee farm is 60 acres of forestland and 5 acres of open fields producing baled hay and growing approximately 2000 Christmas trees of various ages. Hunter plans to plant 200 trees each spring to replace those sold or lost to mortality.

Soil is key to overall Christmas tree health. Before planting, growers need to understand their site soils, microclimates including wet areas or frost pockets. The Carbee farm’s soils are moist and the area lies in a late frost pocket where balsam firs grow best. Fraser fir likes south-facing drier soils and do not do as well. But it’s not just the initial clearing and site-prep and planting that keeps tree farmers busy, it’s the ongoing annual care and feeding.

Trees need to be fertilized each spring before the bud break. Throughout the summer the grass and weeds need to be mowed. They create competition and if you don’t mow, trees grow tall and spindly. Carbee mows the entire plantation three times per growing season depending on rainfall. While mowing is among the most time-consuming tasks, Hunter enjoys mowing but warns you need to watch out for developing hornet nests both in the ground and in the trees. Good advice. Next comes shearing which generally takes three July weekends. Some folks prefer the beach, golfing, fishing or hiking and camping on prime summer weekends. Christmas tree farmers mow and shear in their trees. 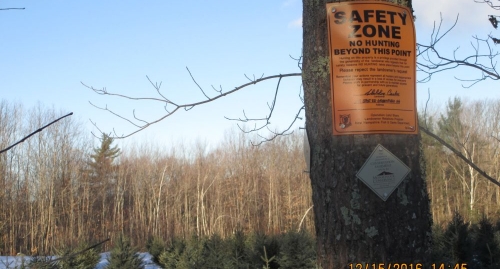 Hunters and the hunted

There can be some conflicting land uses. A few years back, Carbee found where a local deer hunter shot a deer and left a gut pile in the middle of the new plantation. Carbee was furious and suspected the deer had been shot from the roadside. He considered posting all the land “No Trespassing.” Instead, he visited the NH Fish and Game landowner relations program which helped enroll the Carbee Farm in the hunter safety zone program and provided advice, assistance and weather resistant signs. Bright red signs posted around the perimeter of open hay fields and the Christmas trees plantation have kept everyone safe.

Hunters tell Carbee they’ve seen deer browsing his trees but his experience has been that deer do little damage, merely nibbling. Yet on three different occasions, moose have devastated tender trees, chewing them back to a skeletal stem!

There are smaller, more pernicious pests: insects. Balsam twig aphids attack pockets of trees and the damage can look pretty bad. “Two or three trees die annually while others recover over time.” Carbee’s philosophy is simple: “I’ve never treated. I don’t spray. I just plant more and hope for the best.” The white spruce leaders need to be trimmed back when trees reach 3 feet tall or white pine weevils kill the leaders. “Then you get a 7-foot tall round bush that looks more like a gumdrop!” Some Christmas tree growers dislike spruce, yet Carbee figures nearly 40 percent of the trees he sells annually are spruce. “People love the full look of spruce trees. And they grow fast anywhere - even on poor soil sites.”

Rewards come during the busy first two weekends in December. “People show up and are in a great mood. It’s Christmas! They bring friends, siblings, children and dogs and have a great time!”

“People are happy to give me money and that, in turn, makes me happy. So yes, it’s a great business during December.”

There are less tangible rewards. The Christmas tree income helps pay property taxes and the costs of fuel and equipment maintenance. It also perpetuates the Carbee Farm tradition while providing high-quality, locally-raised trees which become the centerpiece of many families own holiday traditions.

Carbee reflects on time spent among his trees. “Sometimes after supper on summer nights, I mow until dusk. I’ve watched deer come out of the woods to feed on clover in hay fields when does are nursing fawns hidden nearby. Since both my parents have passed away (Sheldon died in 2014), I’m finally learning to slow down when I get home from work. When I need to get away, I take a walk through my growing trees. There is nothing more satisfying.”

“When I was younger, we used to get a lot of people from the suburbs outside of Boston. Now my customers are more local. I like that. I sell trees to folks who tell me they started coming here with their parents when they were young. Generations (of customers) pass through along with the plantings of trees, each as they mature.”