What the Falling Ash Leaves Revealed

Could a Garden Mystery be Solved?
Brenda Charpentier
Recreation

Some trees cast off their leaves early in the fall, while others wait. In the Lakes Region earlier this fall, bare branches belonged to the white ashes, while those clothed in yellow or orange belonged to birches and sugar maples. The still-green hardwood trees were the beeches and oaks.

I should have known not to get smug when the potatoes in my new garden spot were thriving in May. I thought it was going to be my best gardening year ever. But then the plants turned yellow and seemed to wither into nothingness in a matter of days. The tomato plants looked sickly and even the zucchini wouldn’t grow.

What happened to my new sunny garden spot? I watered dotingly but not too much, and I kept a close watch for pests. I had lots of theories (it couldn’t be  gardener error, right?) but autumn has just revealed a very interesting possibility.

Autumn is, after all, the season of revealing. Leaves lose their green chlorophyll, revealing the sunshine colors. Leaves fall, revealing bird nests or wasp hives you didn’t know were there all along. But saying that leaves just “fall” doesn’t do justice to what’s really going on here at all – and doesn’t support my theory -- so we need to back up a minute.

The Center for Northern Woodlands, which publishes the magazine Northern Woodlands appreciated by many a nature lover, also puts out one of those 365-page calendars you flip every day to reveal the new date and some little nature fact. One of the nature nuggets for October is, “Trees aren’t losing their leaves. They are draining them of nutrients and then throwing them away. It’s an active process.”

In the forest, nothing goes to waste, and nothing just happens in a system that is efficient, often beautiful and active rather than passive, which as you will see in a minute backs up my garden-failure theory.

The theory came to light because trees don’t drain nutrients from and discard their leaves in the same way or at the same time. There’s a progression of incremental change, creating mini seasons within the season, and if you get to know that progression, it can increase your tree ID skills and enjoyment of your walks in the woods. Or lead you to find blame for bad potato-growing skills.

White ash trees, for example, are among the first to cast off their leaves after they turn a tell-tale purplish-brown. Botanists surmise that trees set their leaves free at whatever time is most beneficial for the trees, and apparently white ash finds some benefit to being first to disrobe. Other trees take a different approach, holding onto their leaves much longer. Many oaks and beech trees are still mottled with green leaves that haven't yet turned brown in the woods now in late October, making them easy to spot, and they’ll stubbornly cling to their leaves after they turn completely brown and crinkly, all winter long.

But it’s the white ash trees that have revealed my potato mystery. Many ashes grow in the woods near my new garden. Last week those trees were bare and stood  in stark contrast to the yellow birches and yellow and orange maples.

They also contrasted with another tree in this mix within sight of my garden that was also a bright yellow, revealed in clear view since the ash leaves no longer obstructed it. It was a black walnut tree, resplendently yellow but with compound leaves made up of many (nine to 21) individual, lance-shaped leaflets. 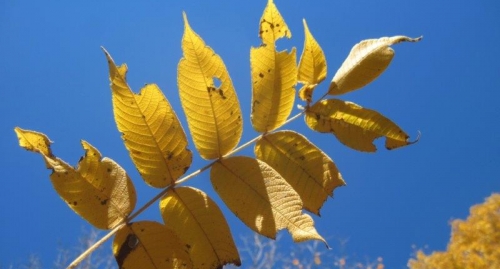 The compound leaf of a black walnut tree in autumn.

It was their opulence in contrast to the bare ash limbs that got my attention and sent me to the online tree field guides, where I was reminded that black walnut is among the tree species that exude a chemical that’s toxic to many other trees and plants. The toxin is called juglone (think “going for the jugular”). Hickory and butternut trees also excrete it, and it again underscores the fact that trees are active, not passive, as they compete for space, nutrients and sunlight to survive.  Black walnuts essentially poison competitors and claim more of all three of those basic necessities for themselves. This M.O. is of great benefit to wildlife, since black walnuts are an important forest food source, and for furniture makers, since black walnut wood is prized for its strength and beauty. But what about potatoes? 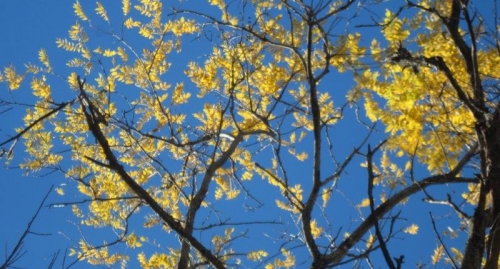 Nuts of the black walnut are an important food source for wildlife. Black walnut wood is prized by furniture makers.

Could black walnut trees be my potato plant assassins? The new garden space is not under the closest black walnut tree’s canopy, so at first I discarded the idea, but then I read this from the University of Pennsylvania Extension Service:

"Where sensitive plants may survive outside of the canopy of a black walnut, highly sensitive plants may not tolerate small concentrations where decaying roots from a removed tree may still be releasing juglone. Juglone toxicity may persist for years after a tree is removed. So, impatience in replanting an area with juglone-sensitive plants is not advised."

Ah ha! Since both black walnuts and hickories are in the woods near my garden, they may well have been present much closer in years past and removed by previous landowners. I also found this from the University of Wisconsin Extension Service: "Vegetables such as tomato, potato, eggplant and pepper, and ornamentals such as lilac, peony, rhododendron and azalea are particularly sensitive to juglone."

It’s just a theory. Or possibly just another excuse that reveals something about the gardener more than anything else after all. It’s my story, anyhow, and I’ve “fall”en for it.