Watch Out for Falling Squirrels 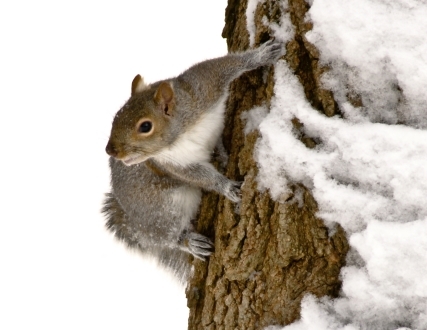 Do squirrels get nine lives too?

I had to wonder about that the other day when I was watching a lively band of gray squirrels chasing each other up the stout granddaddy maple in the back yard. From my kitchen window, I noticed they were popping in and out of a cavity in one of the thickest branches high up in the tree. Suddenly one squirrel inconceivably fell from the treetop. Down, down, down it fell, until I lost sight of it behind a rock wall.

I stared at the rock wall for a minute, a little stupefied like I’d just seen the sky turn green or a bird flying backwards. You kind of half expect a Flying Wallenda to fall sometimes during their highwire acts, since they are human after all, but you just don’t expect squirrels to fall. It seemed like a basic law of nature had been broken. 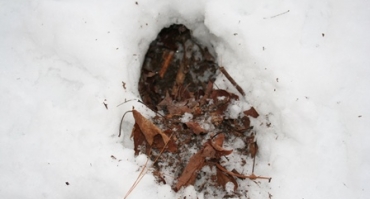 In winter, our woods are full of squirrel digs, where squirrels searched for nuts and seeds hidden under the snowpack. Forest Society photo.
I threw on my boots and headed outside. This was before our recent snowfall, so the ground under the maple was covered in a hard crust of ice and snow and strewn with rocks and rotting logs. Definitely an unforgiving place to land. I expected to find the squirrel’s dead body, but I thought there might be a chance it was lying there injured and in pain.

But the squirrel wasn’t there. I inspected the area like a crime scene. No blood, no tufts of gray fur, no little impact crater, nothing. Was it possible the squirrel survived a 40-foot freefall and simply got up, brushed itself off and scooted back up a tree?

A quick Internet search said yes. One particularly reassuring video is titled “Squirrel Hurls Itself Through a Fourth-Story Window and Scampers Off, Unscathed.” Sure enough, that squirrel had gotten into someone’s apartment kitchen and when confronted with an i-phone wielding human, it actually does jump out the open window to plunge down to a tiled patio below. Then you see it run away, without so much as a limp.

Many forums feature eyewitness stories of squirrels surviving falls onto asphalt, onto frozen flood water, from 20, 40, 50 feet and more. Of course there are stories of the ones who didn’t survive, but, according to the Smithsonian National Museum of Natural History’s website, “Fatal falls are rare.”  Then there’s the comment by KSFarmer from Kansas on a GardenWeb forum: “The only squirrel I have ever seen fall and not survive was one who fell in front of my dog and couldn't get back to the tree quick enough.”   There’s some bad luck for you!

Some mammal experts point to that well known bushy tail as the squirrel’s saving grace. “It enables the squirrel to maneuver quickly without falling. If a squirrel should fall, the tail acts as a sort of parachute and cushion,” says a squirrel fact sheet created by the Oregon Fish and Wildlife Dept.

I guess that’s not so surprising that the same muscular, short-legged design that enables squirrels to leap effortlessly from a flailing limb in one tree onto a limb of another tree, or to hang upside down on a spinning bird feeder while stuffing itself with seeds, also enables them to withstand an occasional slip of the paw.

What’s more likely to kill them is a fox, bobcat, hawk, owl or coyote or any number of other predators.

Given how amazingly strong, agile and death defying squirrels are, I think it’s strange that the word “common” is so commonly used to describe them. Someone may ask the woods walker, “Did you see any wildlife?” and it wouldn’t be uncommon for the response to be, “Not much – just some squirrels.”

But squirrels are critical to a healthy forest ecosystem, and not just because so many other animals eat them. Squirrels are “scatterhoarders,” meaning they hoard nuts and seeds for later by burying them all over the place. We all know that, right? You may also know that the seeds they never find again are basically planted and so the squirrels are little tree farmers. But did you know that all those squirrels digging all those little holes in the forest floor are actually mixing and spreading microbes that make healthy soil?

In nature, there’s no such thing as common; it’s all inter-connectedly cool and miraculous.

This time of winter is actually breeding season for gray squirrels here in New Hampshire – time for “falling” in love, so to speak, which may or may not be better than falling off a branch.  If you sit and watch them for a while, you might see them acting frisky and building dried-leaf nests in treetops or bringing mouthfuls of leaves into tree cavities, their preferred nesting spots. Enjoy the show, sure to be an uncommon display of grace.