A Tree for Me, Says the Cold Chickadee 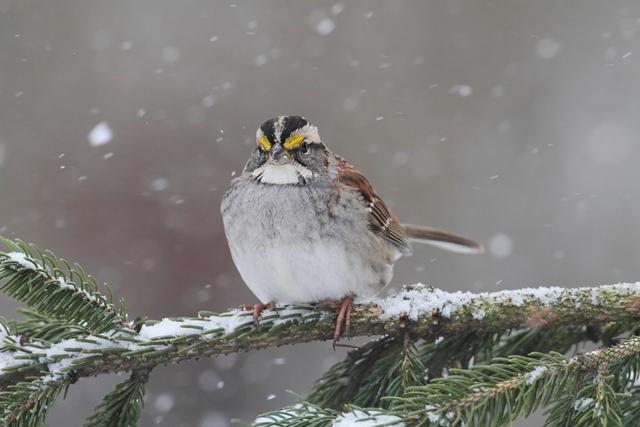 Winter birds like this white-throated sparrow roost at night to hide from nocturnal predators and conserve their energy until they can resume eating at dawn. Stevebyand - Dreamstime.com.

If that sounds as depressing to you as it does to me, let’s think about chickadees. Or finches. Or sparrows. Our longing for light is nothing compared to their winter plight. For favorite backyard birds, this season of “the cold air, the iron New England dark,” as William Faulkner put it so cheerfully in Absalom, Absalom, throws down a survival challenge that dictates their every move. Those flitting, chirping visitors to our yards by day turn into the grittiest of survivalists by night. And for both birdfeeder regulars and those living far from people on high, wind-whipped mountains, it’s trees that often give the refuge that saves the day – or night, in this case.

Birds that stick out the winter here without migrating use the daylight hours to eat as much as they can in between rest breaks to conserve energy. In this way, they build up enough energy reserves to survive the night. These longer nights around the winter solstice mean that the birds have to wait longer before consuming more calories at daybreak. Pamela Hunt, senior biologist for bird conservation with New Hampshire Audubon, said birds feed so heavily in the mornings because they must replace the calories used up during the night. “They are kind of living on the edge in that regard,” she said.

Backyard favorites like woodpeckers, cardinals, chickadees and nuthatches devour mainly tree and plant seeds, shrub berries, and hibernating insects and their eggs and larvae that live under tree bark. At dusk, they look for a place to sleep that will provide shelter from death-breathing, frigid winds and weather and where nocturnal predators will have the hardest time finding them. 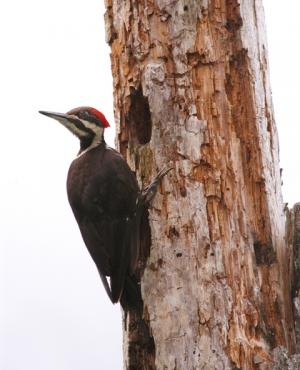 Pileated woodpeckers excavate cavities in snags that other birds may use for winter shelter later. Alandyck-Dreamstime.com
Donald and Lillian Stokes’s A Guide to Nature in Winter names woodpeckers, chickadees, nuthatches, titmice, wrens, creepers, tree swallows and owls as birds that spend nights sheltered inside holes in trees. Often the trees are dead or dying but still standing. Some of these “snags” got their tops snapped off during a storm. Woodpeckers and chickadees are known as pioneer excavators who peck the holes other species will use later. They are wonderfully strategic, the Stokeses write: “Studies of smaller woodpecker holes show that they tend to be east or south and be on the lower side of sloping branches or trunks. These two features enable them to receive the warmth and light of the morning sun and keep rain (and snow and sleet) out.”

Snags left standing after a logging operation are signposts of a logger and/or forester mindful of wildlife habitat needs. The best loggers will leave even quality wood standing in a broken-off tree, knowing that it’s only a matter of time before the wood inside will begin to rot, cavities will form and the snag will become hospitable to wildlife.

Live trees, especially coniferous ones that offer the shelter of needles, offer a different kind of shelter. Many evenings as dusk approaches, I’ve watched wild turkeys flying up to tall white pines on a field edge near my home, putting themselves to bed after feeding in the cow pasture below. When you look at an evergreen tree after snowfall, you can see how the branches catch the snow and create roofs that would help to keep a bird from getting buried while trying to sleep. And trunks block the wind, so by perching close to them on the least breezy side, birds stay warmer.

Shrubs and even brushpiles (which look just like live shrubs to a bird, Hunt pointed out) likewise give shelter to birds that prefer to nestle in for the night with the protection of twigs and sticks surrounding them. While most winter birds utilize trees and shrubs, some prefer to rest on the ground or even, in the case of winter waterfowl, in water that remains unfrozen, relying on their unique physiological strengths to protect them.

Choosing the right spot to shelter during long nights is important, but birds also rely on  some amazing abilities to help them make it through.

“One of the key things birds will do is lower their body temperature at night … birds can lower it enough to go into a semi hibernation called a torpor,” Hunt said.

In this way the birds expend less energy and can make their reserves last longer.  Citing studies of goldfinch winter survival, authors James Halfpenny and Roy Ozanne reveal more of the avian survival kit in their book, Winter, an Ecological Handbook. A goldfinches’ metabolism changes in winter so that it stores more fat, they write. It also “increases the number of feathers covering its body by almost double… and has the capacity to increase its heat production up to about five times normal and to sustain that production for several hours. In the winter, the goldfinch may shiver all night long.”

Starting tomorrow, our days will slowly start to grow longer. It’s an incremental creep, with minutes of daylight added each week until by the end of January we’ll have nearly an hour more daylight than today. If that thought isn’t enough to cheer you through the longest night of the year, remember the tiny, tenacious birds and take their lead: Eat well, get lots of rest, spend time with trees. Before long the birds will forget their shivering and will be singing spring love songs once again, and maybe so will we.