Take It From Middleton Maury and Sugar Hill Phil 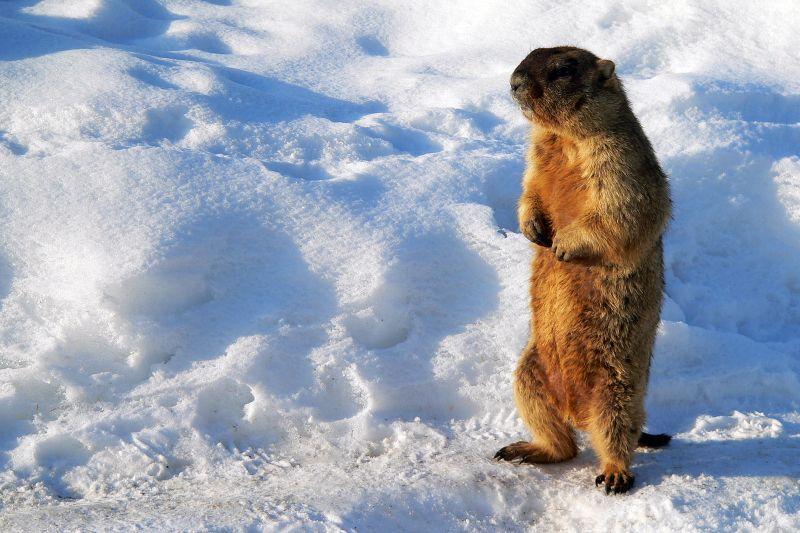 The groundhog who patronizes my garden each summer doesn't usually show up much this time of year. That's not surprising since groundhogs (marmota monax) are among the few mammals that truly hibernate. They often dig a separate winter burrow that dives below the frost line. While hibernating, their heart rate slows to four or five beats a minute, and their body temperature falls to as low as 39 degrees Fahrenheit. They reach a semi-comatose state not unlike college kids on spring break after the requisite doses of Jagermeister.

So I was a little surprised when, earlier this week, I came across my local groundhog friend squeezing himself up through a fissure in the frozen snow, rubbing the hibernation out of his eyes. He's known in these parts as "Middleton Maury."

"How ya' doin', Maury?" I called out to him. He turned his head toward my voice and squinted, unafraid. He long ago concluded that I was no harm to him, even when he digs his summer condo smack dab in the middle of my lettuce patch. (My garden varmint control methods are little more than planting more of whatever they eat so that there's enough to go around.)

"Right," I said. "Groundhog Day. Predicting when winter will end and all that."

He nodded sagely. Or maybe parsley, and in a thymely fashion. He had eaten all my herbs last summer.

"Yep. How would you like it if you got yanked out of deep sleep, stuck in front of a TV camera and told to make with predictions, pronto. Good grief, what a racket."

He stretched his face, looking like Dustin Pedroia stepping into the batter's box.

"Happens to me all the time, Maury," I said. "I'm in the PR business, after all. Reporters work 24-seven these days - they're usually half-asleep themselves when they ask the questions. What can I say? It's a living."

"Oh, really?" Maury said, stretching the stiffness out of his arms. "And what exactly do they think you know anything about? I could tell them that for sure you don't know a whole lot about gardening."

"You and your family are welcome to move along to the neighbors anytime if you don't like the menu," I said.

"But to answer your question, reporters call looking for predictions about all kinds of things, Maury. How will our forests adapt to climate change? Will there be enough wood for generating renewable energy? How will development sprawl impact the ability of our forests to keep our rivers clean and cool for drinking water and fish habitat? And, of course, the big question," I said.

"The big question?" Maury grunted. "Let me guess: 'How much wood could a woodchuck chuck if a woodchuck could chuck wood?' Man, I wish they'd give that a rest. The Algonquians called my ancestors 'Wu-shak,' and then your people show up 400 years ago, can't hear straight, and start calling us woodchucks. The only thing I hate more is when I get called a 'whistlepig.' Enough already - I live in a hole and I eat grass. End of story."

"And more than the occasional cucumber, I've noticed," I said. "And no, Maury, that's not the big question. The big question is, 'What will happen with Northern Pass?'"

"Oh that," he said, rolling his rodent eyes. "That's easy, compared to predicting how many more weeks of winter. My cousin Sugar Hill Phil knows all about it."

"Sugar Hill Phil?" I asked. "What does he know about Northern Pass?"

"Sugar Hill Phil knows what any groundhog with common sense knows," Maury said. "He knows that whether you're a woodchuck or a private transmission line developer, the only way you're going to survive is to burrow underground. There's nothing but trouble overhead." 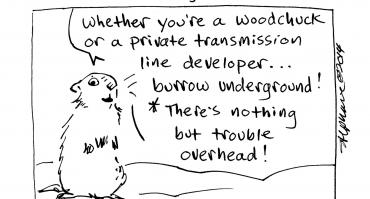 The sun, low in the sky, came out from behind the clouds, casting long shadows behind Maury and me. He paused, cocked his head and closed one eye, taking a measure of the shadow.

"Six weeks," he said. Then he grinned a little whistlepig grin. "Or not."

And down his hole he went.