Smile! You're on Candid (Game) Camera

After the bitter cold at the end of January and the fresh snow that fell in many parts of the state, the woods came alive. Suddenly it seemed, there were animal tracks everywhere. A walk in the woods at my modest Tree Farm revealed a tapestry woven from the trails of leaps, bounds, walks and waddles. 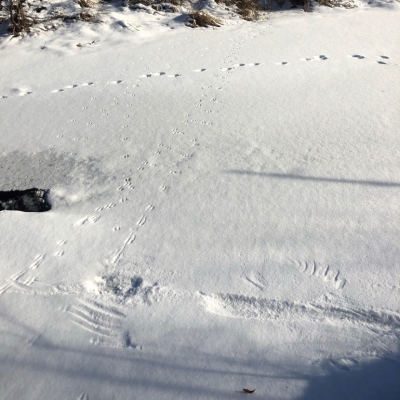 Weasel tracks featuring a raptor wing touchdown and bobcat tracks (background) on a popular frozen stream crossing. Photo: Shauna Soua/Monadnock Conservancy.
And in many places around the state, footprints of the human variety soon threaded alongside. We are perennially fascinated with the seasonal ability to trace the path of critters that we know are in the woods, but don’t always see. Perhaps in response to deeply hard-wired instincts, many of us are compelled to try to figure out which critter went where and why.

Last Saturday offered prime conditions for an animal-tracking field trip hosted by the Monadnock Conservancy at the Devan Preserve in Marlborough. One of my Forest Society colleagues, Zach Pearo, tagged along to help out the Conservancy’s Shauna Sousa and wildlife tracker Janet Pesaturo, who were teaching the basics of wildlife tracking and identification.

Pesaturo is also among the increasing number of people who use wildlife cameras to capture stills and video to supplement and confirm the more old-school detective work of examining tracks in the snow.

In fact, Pesaturo has written a book about how to best set up a game cam for “camera trapping,” as the activity has become known. Her “Camera Trapping Guide: Tracks, Sign and Behavior of Eastern Wildlife” offers tips on where to set up a game cam to capture the most interesting shots. 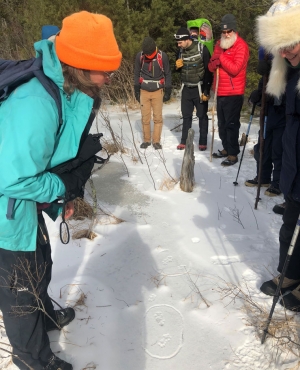 “Camera Trapping Guide” author Janet Pesaturo, left, and Zachary Pearo, Bobby Rupnick, Peter Beblowski and Judith Bischoff admire bobcat tracks on a recent tracking hike in Marlborough. Photo: Shauna Sousa/Monadnock Conservancy.
As any wedding photographer knows, it helps to think through where to point your lens to capture the images that tell the real story — I don’t mean the half-dead relatives arranged like greenery around the flowery bride. (Talk about wild life!)

Pesaturo’s book delves into 41 species, including 35 mammals that live in the eastern United States, focusing on animal behavior to help readers know where and how they might increase chances of camera-trapping a given species. She offers tips on challenges like capturing images of small, fast-moving animals and how to avoid triggering the camera unnecessarily.

It was a good day at the Devan Preserve.

“We observed recent tracks by bobcats, coyotes, rabbits, porcupines, weasels, and deer,” Pearo said. “We also found an otter slide which I have never seen before.”

These days, successful camera trapping is a social activity that’s driven by the opportunity to post your prize video online for others to enjoy, admire and comment on. Do quick search online or on your favorite social media platform and you’ll be rewarded with dozens of groups dedicated to posting and discussing the latest shot of New Hampshire wildlife caught on camera.

The collective results can be remarkable. With thousands of cameras capturing hundreds of thousands of images, we are crowdsourcing an unprecedented documentation of wildlife. (All we need now is that elusive mountain-lion shot.)

The Forest Society is partnering with the Center for Wildlife on Feb. 23 to take mammal tracking one step further. Participants will gather at our Creek Farm forest reservation in Portsmouth to seek out and learn to identify tracks.

The Center for Wildlife will be bringing along some of their live animal ambassadors to help teach — allowing us watch, for example, Henry the porcupine “make tracks.” (If you’ve never met Henry, he’s a rock star.)

The program runs from 10 to 11:30 a.m. It’s open to all ages, and involves a moderate hike. Find out more information and register online here.

Jack Savage is the executive editor of Forest Notes, the quarterly magazine of the Society for the Protection of New Hampshire Forests. He can be reached at jsavage@forestsociety.org.