Rites of spring: birds return; not all are beautiful

After migrations of hundreds or thousands of miles, birds return to NH forests. Not all are renowned for voice and plumage yet each fill an ecological niche.
Dave Anderson
Birdwatching
Wildlife 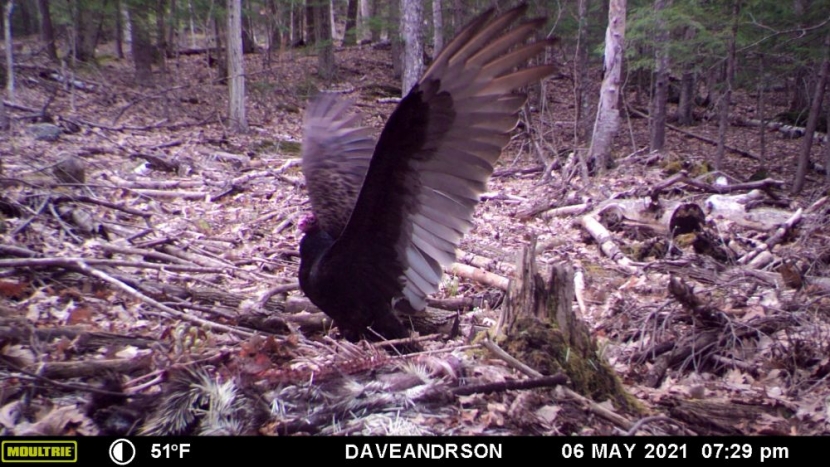 Close photos of vulture wings are amazing — they look like a glider with a six-foot wingspan on a turkey-sized body. (Photo: Dave Anderson)

May is always miraculous for the annual “fallout” of migrant songbirds that proceeds in waves — particularly on southwest tailwinds of arriving warm fronts. During spring migration, there is an audible progression of new bird songs. The dawn chorus grows in fits and starts matching fitful weather when temperatures fluctuate between 60s- and near 70-degrees interspersed with surprise cool spells and winds. This spring has been particularly windy.

Winter residents including chickadees, tufted titmice, nuthatches, brown creepers, cardinals and even bluebirds are less conspicuous until males begin active singing during courtship that precedes nesting. Early nesting birds tend to eat seeds and nest in hollow tree cavities or nest boxes for shelter and are less reliant on the insects that emerge later.

I typically hear at least a dozen species during a bird walk at 6 am. By 9 am, songs have diminished to half that. One rite of spring is trying to remember birds by their songs that identify birds hidden in unfurling leaves of the greening forest canopy. The tree shade conceals singers, nests and feeds emerging caterpillars comprising the majority of avian diets.

Spring migration north is faster than the leisurely southern migration in autumn. Bright-colored males in breeding plumage race north to be first to claim and defend the best nesting territories to attract potential mates. Like any real estate transaction, location is everything. Birds are precise about preferred breeding habitats. A walk from backyards to open fields to wooded trails reveals close affinities to specific habitats. Low-nesting birds of the forest with drab or camouflaged plumage have loud ringing songs. Wood thrushes, hermit thrushes, winter wrens and ovenbird songs penetrate the thick understory where bright colors are not as useful as song. 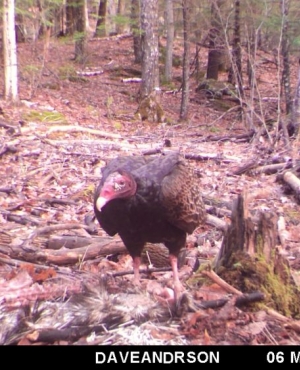 Birds lacking the songs and colors that most appeal to people still play essential ecological roles. None are more maligned than turkey vultures, sometimes called “turkey buzzards.” Widely considered ugly with naked red heads and a diet of carrion so people associate them with death. Vultures deserve a better reputation and appreciation.

The most common NH vulture is the large, red-headed turkey vulture. Smaller black vultures common further south and have recently expanded their range into southeast NH.

Turkey vultures are common over highways and open fields while gliding and rocking on tilted, two-toned wings held in a “v” shape dihedral. Vultures are masters of the skies. The long, broad wings allow them to glide while using excellent eyesight and well-developed sense of smell to locate dead animals, carrion. They forage by smell and can detect a faint whiff of gas produced by the beginning of decay of dead animals even beneath the forest canopy. The portion of vultures’ brains that process smell is out-sized relative to other animals. 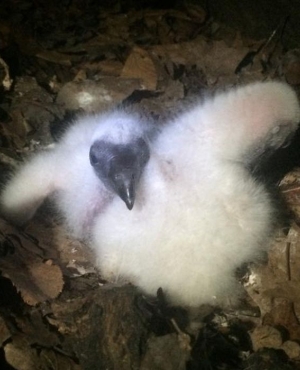 The scientific name for turkey vulture is “Cathartes aura,” Latin for “cleansing breeze.” Vulture stomach acids tolerate and can eliminate rabies virus. Vulture scat is devoid of viruses and bacterial toxins that can kill large mammals. They provide critical sanitation functions. Their role as scavengers recycles dead animals but also makes vultures vulnerable to rodenticide poisons. The most imperiled vultures of Africa are persecuted, poisoned by poachers of elephant ivory or rhinoceros horn in the illicit wildlife trade because game wardens locate evidence by watching for circling vultures.

Vultures return to NH in late winter, sometimes roosting in the Seacoast region. I saw photos of vultures gathered at the rim of warming chimneys in Exeter as early as late February. Before April they disperse further north following rivers and highways to summer nesting territories. Vultures nest on the ground in hollow logs, derelict buildings, rocky crevices and beneath the shelter of overhanging ledges. It can be unnerving to discover such a large bird popping out of a jumbled granite talus slope. Their self-defense mechanism at their ground nests involves hissing and regurgitating on potential predators. That’d do it for me! 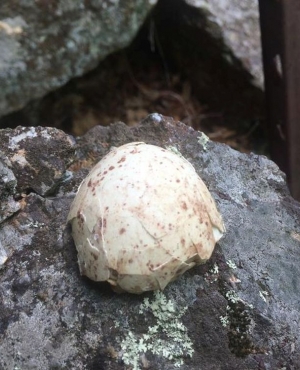 I visit a perennial nest site in a tiny granite cave lined with dry oak leaves on a forested ledge favored by porcupines. Fuzzy vulture nestlings — typically two — hatch from spotted brown eggs in May. Vultures are attentive parents brooding young and regurgitating food for nestlings for 10-11 weeks before nestlings fledge in July. I watch the extended family of as many as six vultures rising on the thermals over open fields and dipping down into the forest canopy above their rocky nest site. 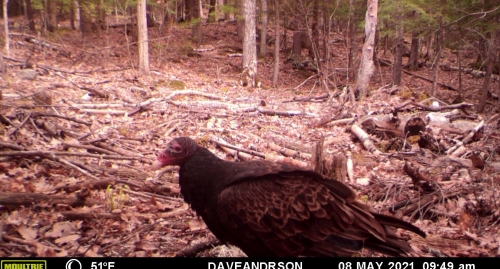 I recently set a wildlife camera over a porcupine carcass in the woods. It yielded fresh close-up photos of several vultures. The camera also photographed crows, tufted titmice, white-breast nuthatches, gray squirrels and nocturnal flying squirrels and mice feeding. One surprise photo captured a barred owl at dusk visiting the carcass site to hunt scavenging mice. Yes, songbirds and squirrels eat meat but it takes a vulture to open a carcass. The close photos of vulture wings are amazing – they look like a glider with a six-foot wingspan on a turkey-sized body. But with a face “only a mother could love” they still elicit revulsion in most people. We might better appreciate how vultures ensure that nothing in the forest is wasted.