Put Your Aversions Aside: Bats Need Our Help 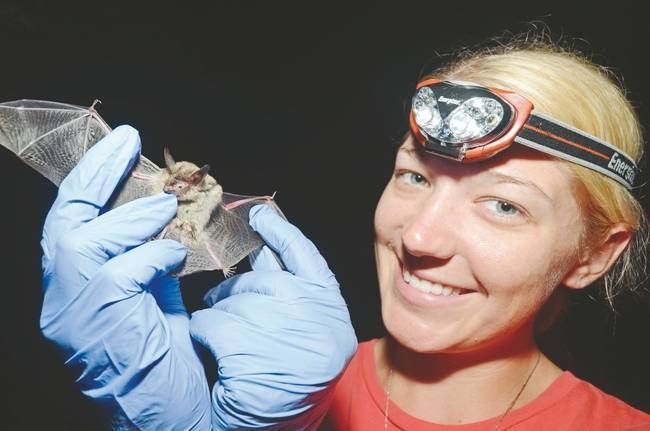 Jackie Jeffrey shows that you can smile while holding a northern long-eared bat. Pete Pattavina/U.S. Fish and Wildlife Service

Earlier this summer I wrote about bats, specifically wooden bats used by Major League Baseball teams to hit 95 mph fastballs (except the Boston Red Sox, who for the most part have only carried them uselessly from dugout to batter's box and back so far this season.)

Today I write about bats of a different sort that are a hot topic of discussion in the woods of New Hampshire.

The northern long-eared bat is one of five bat species that overwinter in New Hampshire — or perhaps Vermont, New York or western Massachusetts. (While bats are known for their use of echolocation ("bio-sonar") for foraging and navigation, they don't have a clue about state boundaries and thus would never be able to vote in the New Hampshire primary.)

Culturally, we aren't very kind to bats. Many of us are afraid of them and put them in the same category as snakes, spiders and, of course, telemarketers, a species for which we have developed a particular aversion. 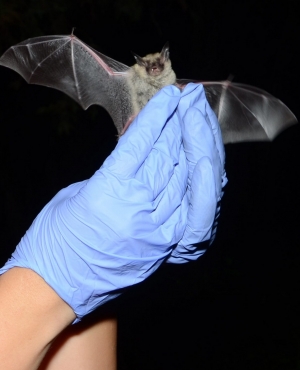 This northern long-eared bat was caught and released during a 2013 Bat Blitz in Oklahoma. Pete Pattavina/U.S. Fish and Wildlife Service
This cultural bias is hardly fair to the bats, snakes and spiders, who have their purpose in nature and probably resent being compared to telemarketers, even though both are known to live in hibernacula. Come to think of it, telemarketers also use a kind of echolocation by phone.

But sometimes absence makes the heart grow fonder. As most readers probably know, our bat populations have been decimated in only a few years as a result of what we call white-nose syndrome, a fungus (Pseudogymnoascus destructans) only discovered once it started killing bats.

White-nose syndrome was discovered in the winter of 2006, and by 2012 it had killed an estimated 5.7 million bats. In New Hampshire, the once-common little brown bat was particularly affected, along with other species including the northern long-eared bat. That kind of catastrophic die-off is alarming, and causes the human species to 1) figure out what's going on and why; and 2) attempt to change the outcome by finding ways to save the bats.

That threatened status affords our long-eared friends some level of protection. So how do you endeavor to protect a colony of bats? In this case, it's an interesting question as the cause of the population decline isn't the loss of habitat, but rather white-nose syndrome.

One way is to try to make sure long-eared bats aren't displaced during breeding season, from early June to late July, when breeding females typically roost in cavities and crevices of trees. Long-eared bats give birth to a single “pup” (they seem cuter already, don't they?).

This strategy manifests itself in guidance and potential rules for forest operations, and rule-making invariably generates discussion. The short story is that if you're aware of a “known, occupied hibernacula,” you shouldn't operate within a quarter mile of it. You should also avoid cutting down known, occupied roost trees during pup season in June and July and avoid clearcuts within a quarter mile of those trees during pup season.

Only federal lands are subject to these rules. Private landowners aren't required to follow the rules, unless federal funds are being used as part of the operation. The Forest Society, for example, had planned some operations on a couple of our forest reservations this summer to maintain and improve certain wildlife habitat.

According to senior forester George Frame, that work was delayed in order to avoid pup season and accommodate the new rules because the operations were being supported via a federal program.

“It's all part of the collaborative nature of managing forestland,” Frame said. “We manage for multiple purposes — wildlife as well as timber — and we use different strategies to accomplish the goals of each purpose.”

Meanwhile, wildlife biologists are optimistic that they are making progress in finding a way to counter the deadly effects of white-nose syndrome. Perhaps our bats will recover. Which is probably more than you can say for the Red Sox, whose sluggers are clearly an endangered species.