The Pleasure of Small-Time Maple 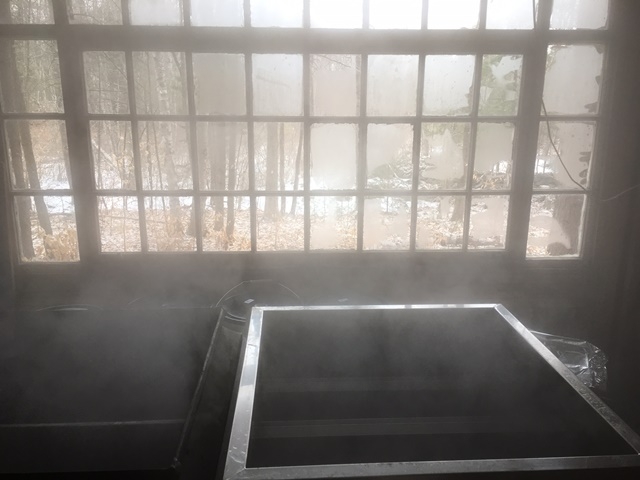 A steamy morning in the sugar house.

Some people like to go big. Huuuge, you might say. On an online forum where maple syrup producers exchange tips and info, a fellow in Wisconsin recently sought input on upscaling his operation from 50 taps (hobby scale) to (gulp) 45,000 taps on family-owned land. That’s a big jump that would require no small capital investment in equipment plus labor.

And while the decorum on that forum is refreshingly upbeat, even there some suggested that if making money is the goal, one might better invest the $1 million-plus in something other than maple. In other words, it might be a quick way to make a small fortune out of a larger stash of cash. You know, like farming in general.

A winter like we’re experiencing highlights the risks of going big. Snowmobile clubs will still have payments to make on six-figure groomers despite the lack of revenue they can get from grooming. And reportedly it’s not been a great year for ski areas even with their snow-making capacity.

This El Nino winter is playing havoc with logging operations in the state, too, as operators have had to play musical chairs with machinery in an attempt to keep harvesting and moving wood to market in the midst of the warm weather. The Forest Society, for example has had an operation stop and start repeatedly on our Ashuelot Headwaters Forest in Lempster, as staffer Gabe Roxby describes in a recent blog posted on our website:

“Licensed forester Jeremy Turner of Meadowsend Timberlands is administering the harvest, and the wood is being cut by loggers D.H. Hardwick and Sons. The warm winter we’ve been having has caused this operation to stop and start multiple times. Cutting, skidding and yarding is only taking place on days where the ground is sufficiently frozen to allow for the use of heavy machinery. This precaution (which is not necessary on all sites) is to protect the site’s moist, cool soils from rutting and erosion.”

The outcome of the maple season is as yet unknown. There are reports of some sugarmakers in northern New England tapping and making syrup during the January “thaw” (if it never froze in the first place, was it still a “thaw”?), which is early. Others have stuck with the tried and true and tapped based on their historical record.  Many maple operations had good runs last weekend, but as I write this it’s close to 60 degrees in central New Hampshire on a day in the last week of February. The heavy El Nino influence is predicted to continue through March.

Which is why I’m glad I’ve kept my imaginary million dollars in my imaginary bank instead of investing in a large-scale maple syrup operation. Of course, while I will avoid imaginary losses, so too will I miss out on the possibility of real gains.

I have great respect for those whose annual income depends on syrup making. It’s incredibly hard work, and modern innovations like tubing and reverse osmosis machines often seem only to add to the list of things that can go wrong.

But for us small-timers, making a little syrup for friends and family is among the great pleasures of living in New Hampshire. There’s a rhythm to the sugaring season that reassures: get your ‘sugarwood’ (firewood used to fire a wood-fired evaporator) ready before the snow flies; evict the winter-over critters and otherwise clean up the sugarhouse as the season approaches; then tap when time comes. Using traditional buckets keeps tapping trees and collecting sap simple.

The small-time operator can enjoy the woods in late winter, stopping to listen and observe as winter melts into spring. And then, boiling; all day and maybe half the night, depending on your schedule, in a sugarhouse sometimes filled with friends, sometimes filled with only the aroma of maple and one’s own thoughts. I like to listen to Spring Training baseball on the radio, adding to the sweetness of my syrup the savory optimism of a Red Sox season to come. It is my calendar--I know that Opening Day in Fenway is usually closing day for the sugarhouse.

if you want to learn more about maple sugaring, consider visiting the Forest Society's Rocks Estate in Bethlehem. We offer the New Hampshire Maple Experience tour on March 12, 19, 20, 26 and April 2. Join us for guided tours of our sugaring operation including horse drawn and tractor drawn rides, tap a maple tree with the group, tree ID, the history of mapling, attend a chef demo about cooking with maple, the NH Maple Museum and sample maple syrup, pickles and donuts. (I don't get the pickles either, but no worry, they don't force you to eat them.)

Jack Savage is the executive editor of Forest Notes, the quarterly magazine of the Society for the Protection of New Hampshire Forests. He can reached at jsavage@forestsociety.org or follow him on Twitter @JackatSPNHF.