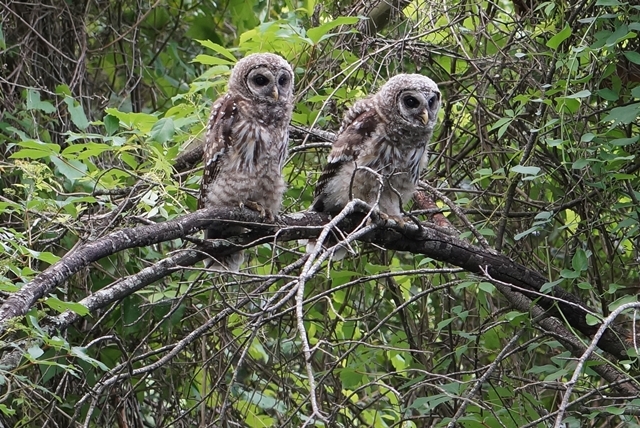 These fledgling owl siblings are nearly full grown. Their parents seem pretty good at giving them some space to learn on their own. Photo by Dreamstime.com

On one of our recent hot, humid nights, I couldn’t sleep, so I got up and stumbled through the darkness to the kitchen for a drink of water. On my way back to bed, a long, plaintive, screechy sound floated in through the open living room window. It sounded like an old screen door with rusty hinges slowly opening again and again. I crept over, knelt down and moved the curtain aside. 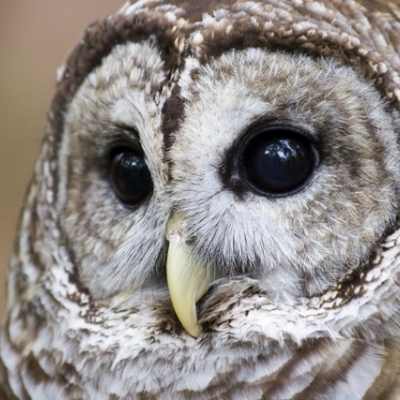 Barred owls live throughout NH, preferring old forests with plenty of cavity trees and a source of water. Photo by Dreamstime.com.
Illuminated by the house light, an owl sat on a maple branch, while another perched on top of a granite post.  The owls’ brown stripes and peering brown eyes gave them away as barred owls. Their size, sounds and behavior gave them away as fledglings trying out their wings.

Sleepily delighted, I kept still and breathed in the night air as quietly as I could so I wouldn’t scare them away. No cars came down our dirt road, and the woods beyond the house light were midnight, moonless dark. As my own family slept, I watched and listened as the owlets practiced flying from branch to stone to ground and back. Their calls came one after the other, relaxed but incessant, constantly telling their parents where they were (wouldn’t it be nice if all human teens did this?) and that they wanted food (all human teens do this very well).

The parents kept quiet and out of sight. Perhaps the parents watched like me, silently assessing as their owlets practiced hunting for themselves near the chipmunk burrow and toad hiding spots in the garden.  As the mother of one teenager who’s heading off to college this fall and another who’s about to get his driver’s license, I knew these parents’ watchfulness. I noted that they did not swoop in and take over. I felt a twinge of guilt that these wild birds were better than I was at keeping quiet and letting their young ones learn without constantly offering their "wisdom."  Were they holding off on providing a fresh mole or mouse while their owlets clumsily sought their own food? Did they find it hard to watch from an ever lengthening distance?

I listened for the owlets calling for the next few days and heard them every night after dusk. I would return from picking up my son from driver’s ed class and hear that reassuring “Eeeeeeeeech… eeeeeeeeech…eeeeeeeeech,” from the woods that told me they were still out there practicing and communicating with the parent owls. One night, a new sound interrupted them.

“Bam, ba bam ba boom!” Someone down the road was lighting off their leftover fireworks from the Fourth of July. The staccato explosions blasted the smooth night air into sharp, black shards. It lasted for less than a minute. Silence followed. Then the fledglings called, but not with the relaxed whistle-screech as before. Now the calls were higher pitched and shrill like an alarm, as if they were shrieking, “What was that? I’m scared!”

The next night, no owls called. None called the next night either, or the one after that. I felt a palpable sense of loss when walking past the empty branch where they had sat on that first night I watched them. It reminded me that my older son's bed, in the room just under that maple tree, would soon be empty, too, when he goes to college.

Lots of things could have happened. It’s easy to assume that the fireworks scared the owls deeper into the forest, away from any houses, but really there are so many scenarios that could explain their disappearance. When I asked a raptor biologist, Chris Martin from N.H. Audubon, what might have happened, he spoke like the scientist he is and reminded me that just because B happens after A, that doesn’t mean B was caused by A. The fledglings might have been ready to explore a bigger territory. A raccoon might have grabbed one and a car might have hit the other. The parents may have directed them to a safer hunting spot away from the road.

“When you saw them, they were probably a couple of hundred yards from their nest tree,” Chris said. “As they mature and get more mobile, they will start to follow their parents.”

He did give my assumption about the neighbors’ post-holiday celebration this much credence: “If I was an adult owl, I’d lead them away from fireworks, too.

About a week and a half later, the fledglings were suddenly back! This time they called to their parents just after dusk from a backyard tree.  It was good to know they hadn't perished and that they had found some other spot for flying and hunting practice. This time I heard the parent owl hooting, too, just once or twice as if calling the young ones out for hunting practice.

Someday the adult owls will realize that the fledglings no longer follow them and are fending just fine for themselves. I bet they’ll do this more gracefully than my husband and I do. This weekend my kids are backpacking into the White Mountains for an overnight with their friends. It remains to be seen whether we’ll be able to stop ourselves from hovering as they prepare and just be ready to fly into action if truly needed.

And in a few short weeks (32 days), we’ll drop our firstborn off at Cedarville University in Ohio and drive back home without him. I’ve heard this is a bad moment for a mom or a dad, and I’m getting ready to act happy for him (which I am), be the stoic Scandinavian (which I am, usually) and wait until he and his brother can’t see me to cry.

I just hope he remembers to call, maybe not as incessantly as owl fledglings, but often enough to say, like them, “I’m here, I’m okay… send food.”

You know you have a barred owl near you if you hear the well-known “Who cooks for you, who cooks for you all” call of the adult owl. You can hear all of their calls at the “All About Birds” website of the Cornell Lab of Ornithology. Here are a few more things to know about barred owls, gathered from the aforementioned website and the N.H. Fish and Game Dept.: