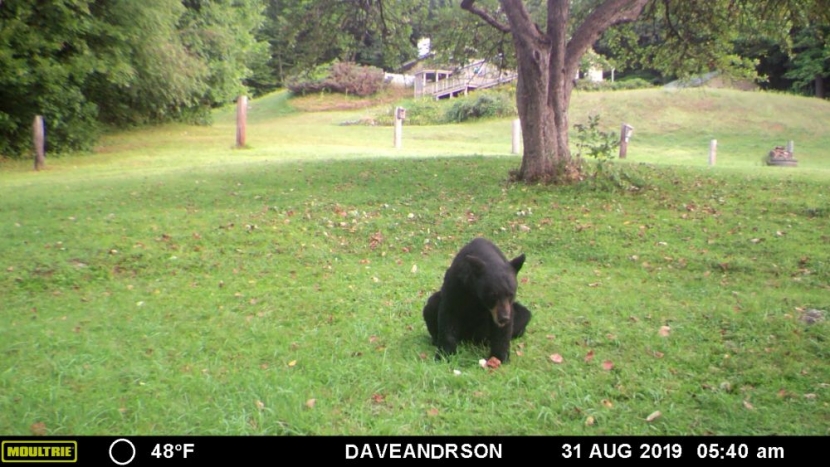 Our fenced-in backyard orchard includes apples, peaches and pears. Outside the wire mesh fence corralling the semi-dwarf fruit trees are a few ancient, standard apple trees. Translation: much taller trees. I try to prune every random apple tree I find on our property to stimulate spring flowering and late summer fruiting. It’s a labor of love not because I expect to eat the fruit, we raise apples for local wildlife.

Heavy fruit years tend to alternate. Last year was a bust – no fruit at all. At the same time last September 2018, no acorns or beechnuts were available in the forest. It was the perfect storm - a widespread fruit and nut famine that became precursor to the “Great Squirrel Apocalypse” and - by early winter – the orphaned bear cub phenomenon.

What a difference a year makes

This year, we have a bumper crop of apples, pears and particularly peaches that ripened at the end of August. Heavy peach crops are even more rare: perhaps 1 in 6 years. We saw heavy apple crops in 2015, 2017 but not peaches.  This was likely due to bitter winter temperatures killing flower buds or wild fluctuations in late spring that stimulate premature peach flowers followed by a frost or lack of early insect pollinators.

Like our veggie garden, the backyard orchard produces more than we can reasonably consume and it arrives all at once - but generally in alternate years. We’ve processed apples for sauce, juice and hard cider. This year our project is peach wine that might be ready and possibly even drinkable by November. The rest of the fallen fruit feeds local wildlife. 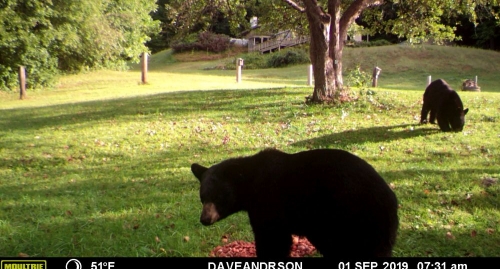 A dense forest surrounds our farm located along a back dirt road outside a rural NH village. Wildlife abounds in the mix of deep woods, swamps, meadows, farms and scattered backyards. All wildlife require the basics: food, water, cover and space.  I add “spice” as the availability of mates is a necessary precursor to perpetuating any species.  Its rare to see wild animals, particularly if they see or hear or smell you first. The most reliable annual backyard wildlife census comes with snowfall and winter tracking opportunities.  Another chance to see wildlife is during an apple year when the fallen fruits lie in the grass of the orchard floor.

While fruit remains plentiful, so are the critters. I keep a remote camera in the orchard and others along trails in the woodlot to harvest fresh photos of the local deer, bears, porcupines, coyotes, foxes, raccoons, skunks, turkeys, crows, ravens and a first for me this year: a fisher.  Year to year comparisons pose the challenge to discern cause and effect. Variations are not necessarily linked to wider statewide population trends. Often the rarity or abundance of a given species reflects some localized condition. When it comes to wildlife habitat, it’s like the “Field of Dreams” catch phrase: “if you build it, they will come.” 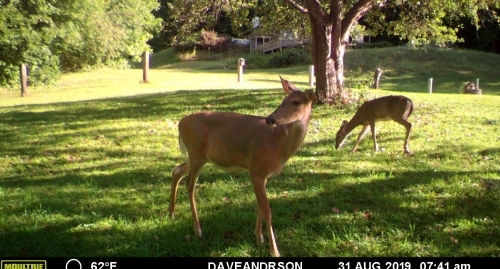 Here are a few 2019 wildlife observations (but don’t call ‘em trends): Conspicuously absent this year are rodents other than porcupines. Populations of white footed- and deer mice, chipmunks, flying squirrels, red squirrels and gray squirrels seem nearly non-existent due to a statewide population crash following the ‘18 acorn famine. I saw my first chipmunk in months just last week.  One interesting rebound this year includes an abundance of rabbits… and we hear about more fishers possibly as a result? Bears are well represented, appearing on cameras even in daylight. Bears are always the stars of excited anecdotes from neighbors posting bruin photos on social media.

Our local coyote population is constantly changing. Two years past, we had dozens of nightly wildlife photos of the local pack of 4 well-fed coyotes led by an alpha-female we dubbed “Black Tail.” Many images showed her and her pack scent marking the orchard floor as sovereign territory. Rarely did we see interloping coyotes on camera. This year, a single, thin and skittish young coyote shares the orchard with a red fox. Last fall we saw more gray foxes on camera. We have not seen bobcats but would not expect to see strict carnivores in fallen fruit – unless possibly to prey on other diners? 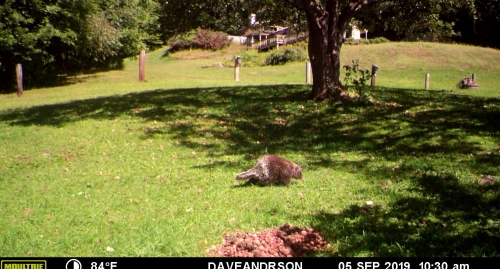 When fruit is plentiful, conflict is rare. A kind of peaceable kingdom where mutualistic sharing takes place with various species moving in and out of camera range from dusk to dawn. The day shift generally consists of turkeys, ravens, crows and porcupines. Crows, ravens, canids, raccoons, skunks, bears and fishers are omnivores; apples are on the menu. The only strict vegetarians are porcupines and deer. Porcupines fear none and enjoy diplomatic immunity. I image the same is true for skunks. Deer are more wary. I have yet to get a single image of a buck on camera. They appear on camera during the November rut but always in the middle of the night during hunting seasons. We see multiple now familiar does accompanied by sisters, yearlings and fawns. All look sleek in reddish summer coats compared to their shaggier gray winter coats.

People ask me for recommendations for planting trees. Most cite beauty, shade and increased property values. Homeowners with neatly landscaped properties find fallen fruit unsightly – a chore to rake and dispose of them. Yet I personally recommend planting long-lived, hardy apple trees to reap a semi-annual harvest of amazing wildlife watching opportunities. Your (wild) neighbors will thank you for decades to come!