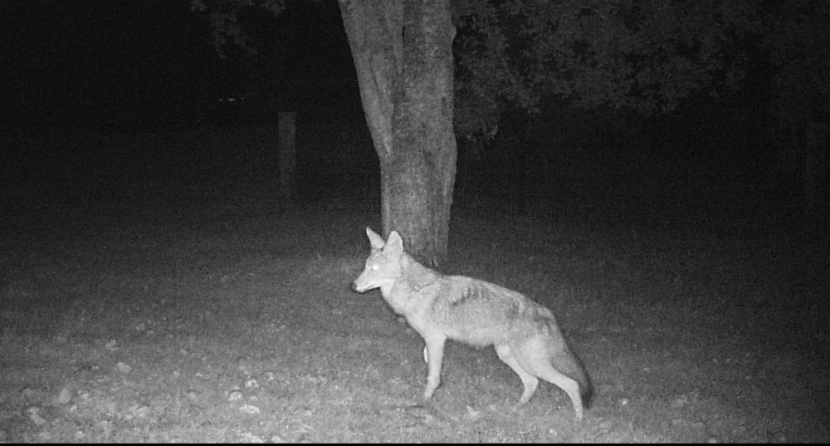 Dominant females coyotes post urine scent-marks to warn-off any potential interloping lone males or rival packs who inhabit our valley. Their howls, yips and barks have become a nightly occurrence in the backyard apple orchard.

The season of fallen apples and longer nights has arrived… I’m reaping an unexpected harvest of wildlife photos from this year’s bumper fruit tree crop.

A diversity of wildlife dependent upon intact forest habitat, protected farmlands and connecting travel routes are taking advantage of an historic bumper crop of apples this autumn. The behavior and interaction of bears, coyotes, deer, porcupines and turkeys provide a glimpse of forest animals common to countless NH farms at harvest time.

Everywhere, sweet windfall apples litter the orchard floor beneath ancient, gnarled trees in the back row of the orchard, fenced outside the confines of the chicken yard. They hit the ground with a hollow thud to lie broken and bruised; soft flesh gone mealy and brown. I pick through firmer fruits to find most are flecked with brown scabs of apple rust or black, powdery mildew. A rare few had ripened to perfection, fell and bounced or rolled to rest resplendent in green grass. We can’t possibly eat them or even hope to utilize them for cider. 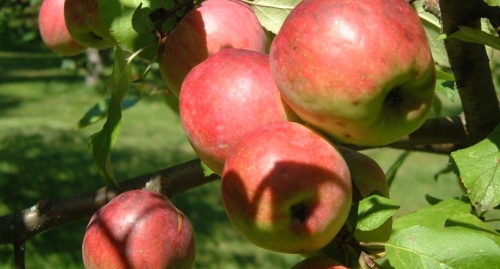 Some years ago, we moved a portable electric fence to allow our sheep to glean the windfalls on the orchard floor. No more sheep graze these pastures, just the occasional lawn tractor. Two weeks ago at 2:30 am, one bleating sheep escaped the village and gamboled the quarter mile to reach our farm. It woke me like some ghost of autumn past. And like Scrooge, I peered out from behind the bedroom window curtain with trepidation. I assumed “counting sheep” was only for insomniacs. We opened the garage door and called her owner to retrieve her next morning.

With bedroom windows open since late August when the trees began raining apples, we’ve been awoken by squabbling porcupines and the yips and howls of coyotes. I installed the wildlife camera and whoa! The nightly arrivals and departures rival Manchester Airport!

By night, the orchard is reminiscent of the bar scene in the first Star Wars movie. All manner of exotic creatures co-mingle, sharing the fallen fruits. The most common by far are coyotes, deer, porcupines, black bears… and more coyotes… and more coyotes.

While sifting through the pre-dawn wildlife photos, I am starting to recognize individuals. We had a black bear sow with 3 cubs. We had one larger adult male boar and an adolescent or pair of twins prone to climbing the trees and shaking down fresh apples. At one point the camera strapped to the tree was jarred when it became a paw-hold. 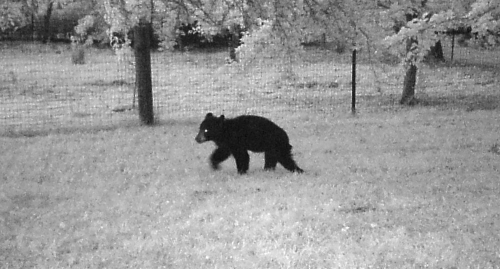 The night shift is busier. Nocturnal visitors include coyotes, bears, porcupines, flying squirrels and deer. The camera captured a coyotes howling and posed with apples in mouth. A juvenile adolescent bear lying down nearby, watched a coyote warily in a single frame.

When dawn tints the southeast horizon faint pink, the camera captured bears and coyotes retiring for the day.  The coyotes are strictly nocturnal and the bears are mostly so. It’s been rare to get any bear or coyote photos other than in total darkness. Bears become scarce when the hunting season opened in September.

The porcupines come and go with impunity. When sharing space with bears and coyotes or deer, the little quill-pigs pay no heed. Coyotes back off and lower their tails with obvious wariness when a porcupine arrives. Deer only visit when no bears or coyotes have recently been present. Dusk and dawn is when deer tend to feed. “Crepuscular” creatures are most active just after sunset and just before dawn. 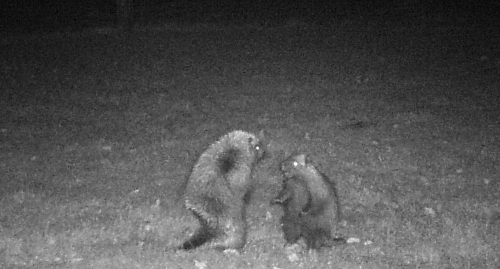 Coyotes often arrive in pairs or in one instance, a family pack of four. The coyotes – like their wolf cousins – maintain a matriarchal society. Dominant females scent-mark the apple orchard perimeter with urine to warn-off any potential interloping lone males or rival packs who inhabit the valley. Nightly coyote family reunions in the orchard are accompanied by wild celebratory barking, yips and prolonged howls. In response to the camera shutter’s “click,” they reflexively look up into branches overhead. Coyotes overcame initial wariness of the plastic/human scent of the game camera strapped to a tree. 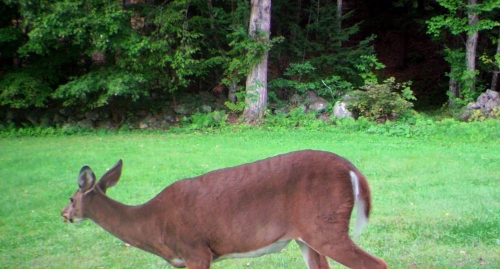 After dawn, four crows who work the close-cropped field for chilly grasshoppers visit the apple pile. Diurnal visitors tend to be omnivores: turkeys, crows, gray squirrels. Behind the fence of the chicken yard, our laying hens feast on windfalls from the dwarf and semi-dwarf fruit trees.

… The ground was one circle of solid red.
May something go always unharvested!
May much stay out of our stated plan,
Apples or something forgotten and left,
So smelling their sweetness would be no theft.

Unexpected sweetness of the apples left un-harvested is yielding wildlife photos which were not in any “stated plan.” The forests of NH provide great habitat for a diversity of wildlife. We’re fortunate for opportunities to view wildlife and to learn more about them right in our own backyards!