A Miraculous Month of May for Bird Watching 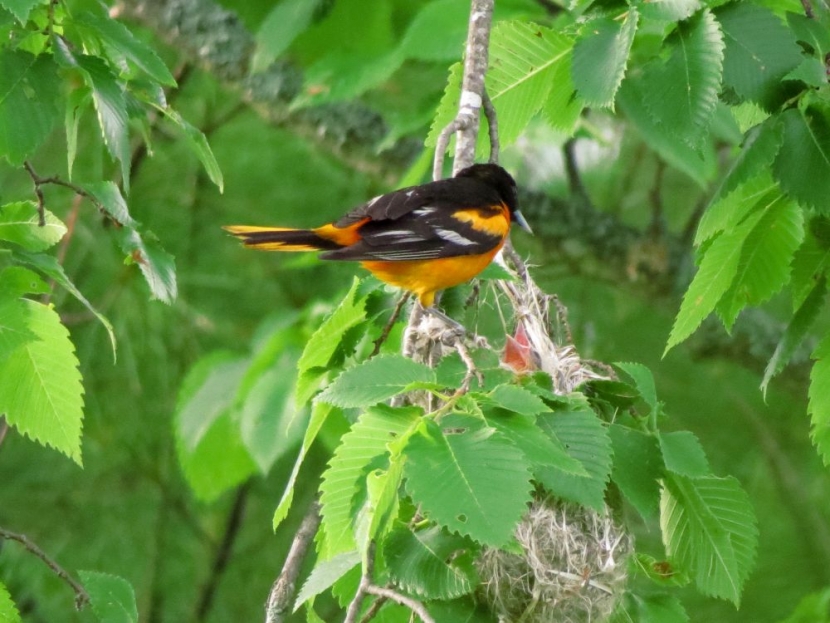 Orioles arrive in May during the spring apple blossom time. The bright colors and loud songs of males attract attention while females are more cryptic. Photo Ellen Kenny.

I received a question recently asking if there have been more unusual bird sightings this spring. There isn’t any sudden influx of unusual birds arriving in NH this spring but what is unusual is the increase in the sheer number of people staying close to home during the COVID-19 “Stay at Home” Order who have begun watching birds. More sets of eyes and even at mid-day are resulting in a notable increase in people talking and sharing photos about the birds.

Birds are always spectacular in May but more of us are actually watching and listening carefully. I’ve been spotting birds I don’t typically see because I’m spending more time watching.

To quote Hall of Fame Baseball legend Yogi Berra: “You can observe a lot by watching." 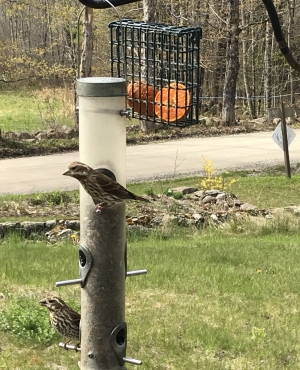 Most people learn to take down birdfeeders at night to thwart black bears. Bears will find black oil sunflower seeds in any NH backyard. Calorie-rich sunflowers and fatty oils of suet cakes are cheesecake for hungry bears. We put our bird feeders out each morning and take them inside each night. Some mornings, chickadees and gray squirrels are waiting for breakfast before I hang the tube of sunflower seeds and the suet cage.

At home we’ve seen a whopping total of 60 different species of birds in the past two months.

Part of the reason was the cool, windy and rainy month of April extended our feeding of winter resident birds including juncos, chickadees and nuthatches and woodpeckers. The winter birds returned to feeders even as new brightly colored spring migrants began to arrive from wintering areas in the southern US and more tropical locales in Central and South America.

The other reason we see so many different species of birds is local habitat diversity. The edges or “ecotone” created by the overlap of different habitat types includes a large wetland along the Lane River and contiguous forest cover and edges of mowed fields, lawns, gardens and an orchard. Edges attract a wider diversity of birds.

Male birds are showy in bright spring breeding plumage. Males are also conspicuous in singing to establish and defend territory and attract mates. Females choose. They watch and listen and select the best territories often occupied by the gaudiest males. I watched male bluebirds demonstrate bringing food to an unoccupied birdhouse to a female audience on a telephone wire. Like commercial real estate, it’s all about location.

Similarly with the thrushes nesting on or near the ground in deep woods: wood thrush, hermit thrush and ground-nesting Ovenbird warblers and winter wrens: both males and females are feathered in shades of brown, rust-red, green and speckled breasts to blend into the dry leaves of the forest floor.  Their songs compensate. The loudest and most striking songs – thrushes, winter wren and ovenbird – have evolved to be loud and distinctive to carry through the dense foliage of the forest understory. 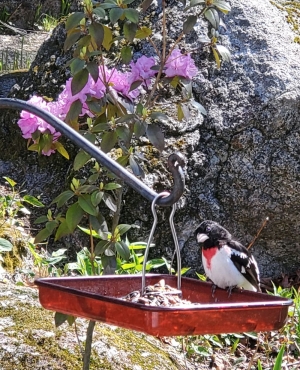 Here is a list and some notes on what I’ve seen recently.

Feeder birds: the most common and reliable daily visitors are the birdfeeder birds: black-capped chickadees, tufted titmice, white-breasted nuthatches and gold finches. They’ve been here the entire winter. Northern juncos – the “snowbirds” of midwinter have dispersed northward where they breed and nest on the ground– often at higher altitudes in the White Mountains

Finches: gold finches, cardinals, purple finches. The finches are seed-specialists with a prominent cone-shaped bill. We see them at the feeders and foraging on the ground.

Sparrows: chipping sparrows, song sparrows also feed on the ground beneath the feeders. The white-throated sparrows were prominent for about one week in April and have now dispersed like the juncos to their preferred nesting habitat in the White Mountains and higher peaks. We had visiting white-crowned sparrows for a week in May. Some sparrows like white-throats and white-crowns arrive in waves during spring migration. Others like the song sparrow and chipping sparrows are here for the summer and are already nesting. It’s worth it to get a field guide to learn basic field marks: clear vs. speckled breasts, eye lines and rings and striped vs, rusty red heads.

Woodpeckers: Wow - we have six different species. The most common are the small downy woodpecker and larger but nearly identical hairy woodpecker. We have raspy- loud yellow-bellied sapsuckers that drill a gallery of holes in apple tree bark and willow tree bark to trap insects. We see northern “yellow-shafted” flickers hopping on the ground while catching ants and flying away with a prominent white rump patch and hear their insistent “wicka-wicka-wicka” call. Occasionally we see the crow-sized, red-crowned pileated woodpecker, a denizen of the forest. A relative newcomer in the past decade has been the red-bellied woodpecker now well established in southern and central NH. We hear their “burr-burr” calls during nesting season.

Raptors: The birds of prey have included nightly calls of the most common forest owl: the barred owl.  We have nesting broad-winged hawks, one of the Buteo species. We see a Cooper’s hawk and a Sharp-shined hawk, both are Accipiter species. Accipiters are sleek bird-eating woodland hawks capable of high-speed flight beneath the forest canopy. They can maneuver between trees at high speed using a long rudder like tail to steer like a stealth fighter. Songbirds fall silent and scatter when these bird hawks make a run at the feeders. The Buteos are chunky-bodied with wider, rounded broad wings and a shorter, wedge-shaped tail. They soar high above trees, riding thermal air currents as they hunt for rodents and snakes. Buteos feed on mice, voles, chipmunks, squirrels and snakes. I watched songbirds flitting without fear in branches around a perched broad-wing hawk, a remarkable demonstration of how well attuned birds are to relative dangers. 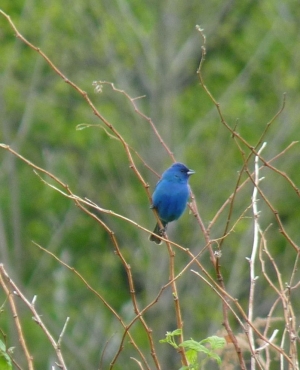 From the wetland, we hear an American bittern and a Snipe “winnowing” in the evening after sunset. Canada geese leave the wetland to graze in tall grass of our un-mowed field. The American woodcock April aerial courtship displays ceased by mid-May. Great Blue herons fly over while croaking and appear prehistoric, a modern pterodactyl.

Thrushes are among my favorite birds. The familiar ringing chorus of male Robins and beautiful lisping of Eastern Bluebirds are the most welcome springtime soundtrack. In the woods, wood thrush and hermit thrush morning and evening songs sound like flutes. Newly-arrived veeries sing a downward spiraling flute song one friend described as “sounded like a spaceship.”

Over open fields, we see a troupe of acrobatic tree swallows catching insects on the fly. Other parts of NH are reporting whip-poor wills. We have pairs of nesting Phoebes in the eaves of the sugarhouse. Our blackfly season misery is the primary reason so many birds specialized as fly-catchers risk the long migration from wintering areas to breed in northern latitudes. 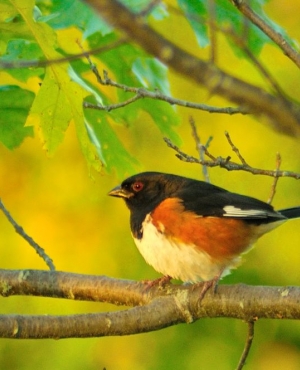 A few more random birds we’ve seen include blue jays and mourning doves. We have turkey vultures, crows and ravens. We have starlings, grackles, red-winged blackbirds and brown-headed cowbirds. The corvids: crows, ravens, blackbirds and the jays and vultures get a bad rap as scavengers that will prey on bird eggs and nestlings.  Cowbirds are “parasitic nesters” laying their eggs in the nests of unsuspecting songbirds who raise their offspring for them, an adaptation to following wandering herds of bison; no time to settle down, build a nest and raise young.

A real silver lining resulting from all the time we are now spending working from home and staying local during the COVID-19 pandemic has been the opportunity to watch the birdfeeders and walk near home while enjoying the spectacular birds in May.