Learning to Like the Milk Snake in the Cellar 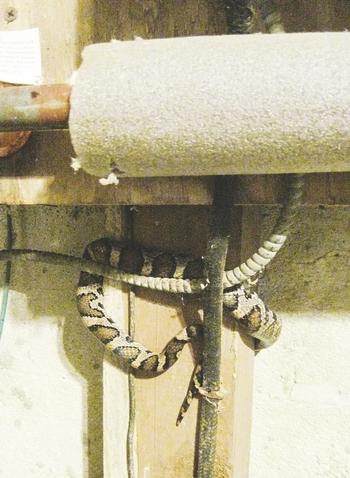 It must be more comfortable than it looks, because this milksnake stayed in this position for days.

Doing the laundry at my house in early winter always includes a strange ritual on the way to the washer and dryer in the cellar: Stop at the bottom of the cellar stairs, gaze at the mishmash of wires and water pump pipes along the old foundation wall and – occasionally -- exclaim, “Oh, there you are!”

I found one there just the other morning, a milk snake about three feet long and as thick as a broomstick. I had to smile, because while its head and upper body were hidden behind a piece of wood mid-way up the wall, its tail end stuck out, betraying its presence. It reminded me of a child who thinks no one can see her because her eyes are closed. It wasn’t moving, so I took the opportunity to admire the pattern of brown splotches on its back that helps it blend in perfectly with the forest floor (when not hanging out in my cellar!) I resisted the urge to reach out and touch its skin, lest I scare it out of its apparent sleep.

It’s not surprising to see a milk snake in my cellar, especially this time of year. Like other snakes in our region, milk snakes hibernate in the winter, usually in underground burrows. Sometimes their search for shelter leads them through a crack or hole in a foundation wall -- especially if a house is surrounded by woods and has an old stone foundation and unfinished cellar like ours – and they find themselves in an unexpectedly toasty spot.

Ordinarily, I would holler for my two boys to come and take the snake outside. But with temperatures in the 30s, that would likely bring an unnecessary and cruel death. So what to do? It was a dilemma, but with it came the realization that I had reached a certain milestone. I wasn’t always so accepting of seeing a snake in my cellar. I grew up loving nature but feeling if not fearful then uncomfortable around snakes. But after moving to our present home 15 years ago, I soon realized I would need to overcome my initial squeamishness about living that close to nature.

I consulted field guides to find out that milk snakes are utterly harmless unless you are a small rodent, bird or smaller snake. They eat by constricting, then swallowing their prey whole, which gave me comfort because I’m 500 times too big for a milk snake to try to squeeze to death and swallow. They’re one of 11 New Hampshire snake species, all of which are nonaggressive unless provoked and not poisonous except for the critically endangered timber rattler (which is so endangered there is only one known breeding population in the entire state, in an out of the way, protected spot.) I learned that milk snakes got their name because farmers always saw them in their dairy barns with the cows, where the snakes could find plenty of mice.

I talked to people who knew all about milk snakes. One wildlife biologist said, “You have milk snakes in your cellar? Cool! They’re great mousers. I wish I had one in my basement.” Another woman described stepping around a milk snake from time to time when going down to her cellar to get a jar of pickles, and I vowed to become as nonchalant as her.

I also read children’s books to my kids like A Snake in the House, by Faith McNulty, about a little snake who gets into a mother’s sewing basket. He spends hours sleeping as the mother sews with the basket on her lap. It’s told from the snake’s perspective, and you feel for his vulnerability and come to understand him as a benign creature. This and other stories helped to replace old, irrational ones, like the one my dad told me, not in words but actions when I was a kid growing up in Minnesota. We were down by the lake getting the rowboat ready, when suddenly Dad picked up a rock and threw it to the ground. It squashed a little garter snake, as harmless dead as it had been alive. I must have thought, ‘Wow, snakes are really bad!’

I knew I had achieved a real comfort level during this latest milk snake visit the other day. It stayed in the same spot for a day and a night. I thought maybe it was to be our sleeping guest all winter. Then I worried that maybe it was dead, its body just balancing there on some wires leading to the fuse box.

But during my next visit it slowly started to glide head first down a wooden post to the floor. Moving like a meandering river, it stopped a few feet from where I stood with my laundry basket. We shared a moment of mutual curiosity, with me looking frumpy in my flannel PJs and it looking lovely in its freshly molted skin. Then, with a final tongue flicker to taste the air and determine that I was definitely not a mouse, it flowed into the small opening where the water pump pipes come through the foundation from the well, apparently its conduit to the outside.

My dilemma about what to do seemed to solve itself. I could have scooted it into a box and escorted it outside to a quick and certain death. But instead I watched the tip of its tail disappear into the darkness of the hole and made a mental note to remember to plug it. Then I simply wished our visitor happy hunting, headed back up the stairs and closed the cellar door.