In springtime, porcupines cause me headaches.
Dave Anderson
Wildlife 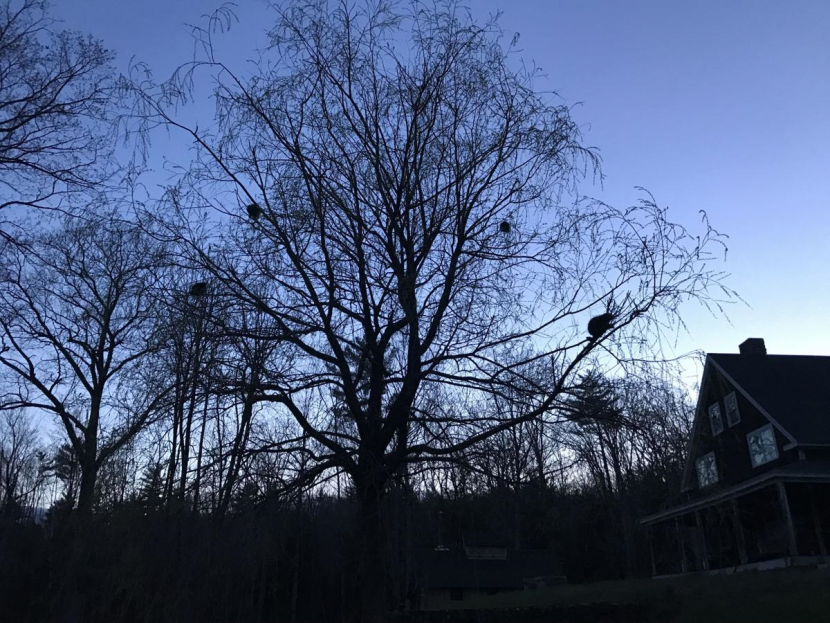 Local porcupines are attracted to front lawn willow tree. Steel stovepipe sections are a non-lethal and low-tech solution to keep them from climbing. We see porcupines often due to habitat that includes ledges with den sites. Four porcupines dine at sunset in our front lawn weeping willow. Photo: Porcupine silhouettes by Garrett Evans.

I knew I should have put the steel stovepipe sections around the trunk of the weeping willow. By the time I returned home, there were five full wheelbarrow loads of tender yellow-green willow switches all over the front lawn and adjacent dirt road. The willow survived winter ice storms only to be savaged by a prickle of hungry porcupines just before its most beautiful time: when willow buds burst into bright yellow catkins followed by slender green leaves.  My neighbor snapped a few photos for me: four fat porcupines silhouetted at sunset, munching happily.

Porcupines favor tender, nutritious willow bark on young green switches. It is like cheesecake for them as far as I can tell. I encase the willow trunk with rusty-black stovepipe sections as a slippery steel barrier to keep porcupines from climbing: a low-tech, non-lethal ecological solution to my recurring, perennial Porkie problems. 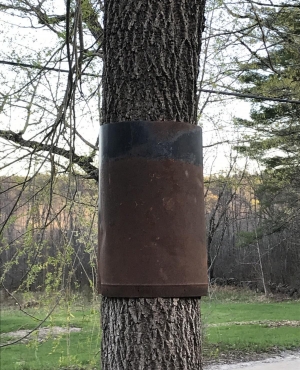 I raked-up the whip-like willow switches covering the front lawn - filling a wheelbarrow five times with incisor-chiseled branches. After the stovepipes, they haven’t climbed it since.

We live in porcupine Eden. The jumble of boulders beneath steep, south-facing ledges on Meetinghouse Hill above our farm provides a Quill-pig condominium complex of winter dens. We don’t own dogs anymore: too many quill issues. Grassy, wet pastures green-up early with clover and dandelions. Tender apple and pear trees provide dessert with fallen fruits in autumn and bark in winter and spring. 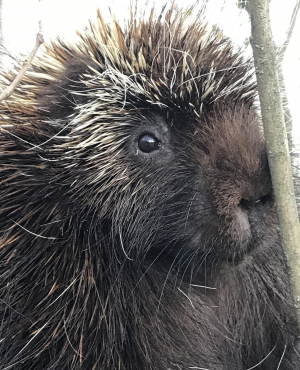 Porcupines do give me headaches. For much of the year, they’re benign neighbors. While strictly vegetarian and generally passive, they remain a nuisance because of the damage they cause to trees and wooden buildings. In addition to plant material, porcupines crave salt and are attracted to objects that have salty human sweat on them, such as ax handles or boat oars. I’ve read they will chew salty rubber tires. They can decimate a vegetable garden overnight, eating tender squash and cucumber vines and fruits. They are hellish on tender ornamental landscaping: our favored fruit and shade trees.

Winter months are particularly difficult for porcupines. They do NOT hibernate. Instead they subsist on high fiber starvation diet of bitter bark and hemlock needles laced with tannic acid and conifer compounds called “terpenoids” produced to ward off browsing herbivores. Unlike browsing deer or moose with multiple stomachs, porcupines digest winter food slowly, taking nearly 40 hours - twice as long as other tree bark eaters - to process their food.  Porcupines typically lose 15 to 30% of their body weight during winter. A tender green salad of May vegetation comprises a welcome Mother’s Day breakfast at the end of winter.

Adult porcupines weigh 13 to 20 pounds and can have nearly 40,000 quills covering their bodies except their faces and bellies.  A typical porcupine home range is about 50 acres. They will live in colonies and are social with a range of grunting and squealing sounds, particularly during their September breeding season. Females give birth to a single baby “porcupette” in April after a 7-month gestation. 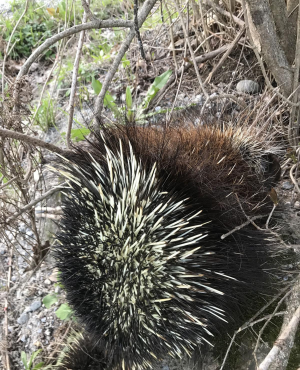 The business end of a porcupine. Photo Dave Anderson

In response to an excessive porcupine population, the State of NH paid a bounty per porcupine from approximately 1903 until the law (NH RSA 470:2) was repealed in 1979. NH was the last state to repeal the porcupine bounty that peaked at 50 cents per porcupine nose. I’ve met more than a few old-timers who relate how creative stitchery could transform a sole pad into a fake nose to reap more cash per kill. While a bounty seems almost unthinkable now, if you have rural NH farm roots, your grandfather would attest it’s true. The reintroduction of fishers to NH and other New England states in the 1960’s is credited with reducing the porcupine population and keeping the current population in check.

My front lawn weeping willow quill pigs climbed as high as they could to access the most tender branches. They snipped-off each, gnawing the cut end before dropping them to the ground and then cut another. Our now-ragged weeping willow will survive but the pruning was not artful. I guess all those quills must give them some kind of headaches?

Why else their fixation in May with chewing on willow trees?