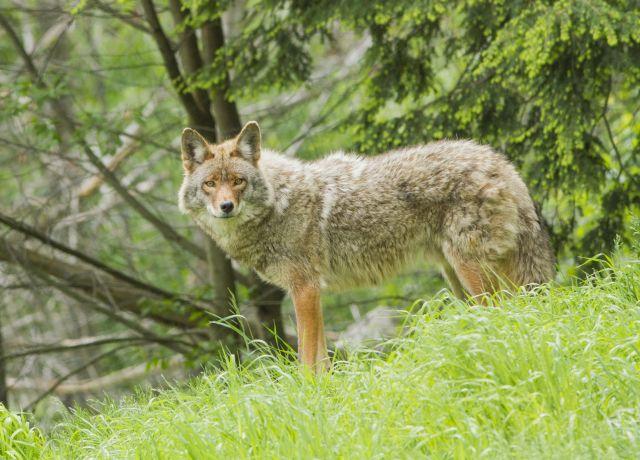 In the pasture beyond our barn the coyote stands on the ridge in the moonlight, looking down into the corral. The horses, who will prance and snort in agitation at the sight of a single wild turkey, pay little attention. Occasionally the coyote will howl, but more frequently the howling we hear comes from afar. To the human inhabitants of the farm, it’s not quite background noise—we actively listen—but like the horses, we hear the yips and howls often enough to consider coyotes just part of the rural landscape. There’s no need to disappear down the cellar hole like Auntie Em fleeing an incoming twister.

Sometimes, however, coyotes make such a commotion that the hair on the back of your neck snaps to attention—a hard-wired reaction we share with others of our ilk. So raucus is the noise that you  imagine there must be a vast pack of coyotes, howling like a frenzied mob of ravenous Black Friday bargain-hunters waiting for Wal-Mart to open so they can feast on the deals. (Coyotes aren’t the only mammals in the kingdom who can be called “opportunistic omnivores.”)

In fact, coyotes live up to their mythological reputation as tricksters by deploying what’s known as the “Beau Geste Effect.” A family group of two, three or four coyotes will use a rapid tonal shift and combined howling to create an auditory illusion—they sound like a much larger group.

Brian Miller, an academic now at the University of Vermont who studies coyote vocal communication, explains that “ Group yip-howls are produced by a mated and territorial pair of “alpha” coyotes, with the male howling while the female intersperses her yips, barks, and short howls. “Beta” coyotes (the children of the alpha pair from previous years) and current year pups may join in if they are nearby, or respond with howls of their own.”

I heard this ‘beautiful gesture’ a couple of weeks ago while at a friend’s houses in Milton. I would have bet money (something I don’t part with easily, regardless of what color Friday it may be) that there were a dozen or more coyotes on the howl prowl just beyond the porch. Apparently it’s called the Beau Geste Effect after novel in which French soldiers prop up their dead comrades during battle to make their force seem larger than it is. For coyotes it is a handy defense mechanism. I think beat poet Allen Ginsberg used the same technique, warding off critics by sounding like a coffee house full of angel-headed hipsters.

Miller’s research has been primarily with the western coyote, but he is confident that his work applies equally to the eastern coyote, or “coywolf” as more wildlife biologists are calling it these days. “The first, the group yip-howl, is thought to have the dual purpose of promoting bonding within the family group while also serving as a territorial display,” he writes. “In other words, the coyotes are saying “we’re a happy family, and we own this turf so you better keep out.”

The coywolf is garnering more attention these days, and not just because of the strange-acting example that reportedly attacked a dog and dog-owner in Greenland, NH, this past week.

The consensus is that the eastern coyote, which is substantially larger than the western coyote, is a hybrid made up of one-quarter grey wolf DNA and two-thirds coyote, with the balance being domestic dog. Thus the term “coywolf” is finding more favor than “coydog”.

Our forest history—and in particular human action—is thought to play a large part in the rapid evolution of the coywolf.  European settlers in New England killed off the eastern wolf, which retreated to Canada where it survived no doubt thanks socialized health care.  With the opening of the West to agriculture, New England farms reverted to forest, and populations of prey animals large and small recovered here as well.

Meanwhile, as the western coyote was pushed out of its habitat (Man’s Pest Destiny?), two things happened: wolves in Canada, finding fewer potential mates, accepted the incoming coyotes and bred; then, the hybrid coywolf found a reforested home in New England, despite our region’s (relatively) dense human population.

Moises Velasquez-Manoff told the story well in a New York Times Magazine article about emerging hybrids (ever heard of the Pizzly, or Grolar, Bear?) from this past August. This is interesting because of how it informs—and in some cases changes—our view of evolution, thanks in large part to our ability to identify and trace DNA.

According to Velasquez-Manoff, who cites Trent University Professor Brad White, the coywolf’s adaptive success is attributed to its hybrid characteristics. The coywolf exhibits both a wolf’s social nature (pack hunting) and a western coyote’s ability to live amongst humans. There are, for example, some 2,000 western coyotes that live within Chicago (where they apparently are able to survive alongside “da Bears.”)

What remains to be seen, even as the hair on the back of our necks involuntarily raises when we hear the coywolf howl, is whether New Englanders can appreciate and adapt to living with our new neighbor. To do so would be a beautiful gesture.

Jack Savage is the executive editor of Forest Notes: New Hampshire’s Conservation Magazinepublished by the Society for the Protection of New Hampshire Forests (www.forestsociety.org) He can be reached at jsavage@forestsociety.org, or follow him on Twitter @JackatSPNHF.