Why do some birds gamble by building nests and laying eggs on the ground?
Dave Anderson
Birdwatching
Wildlife 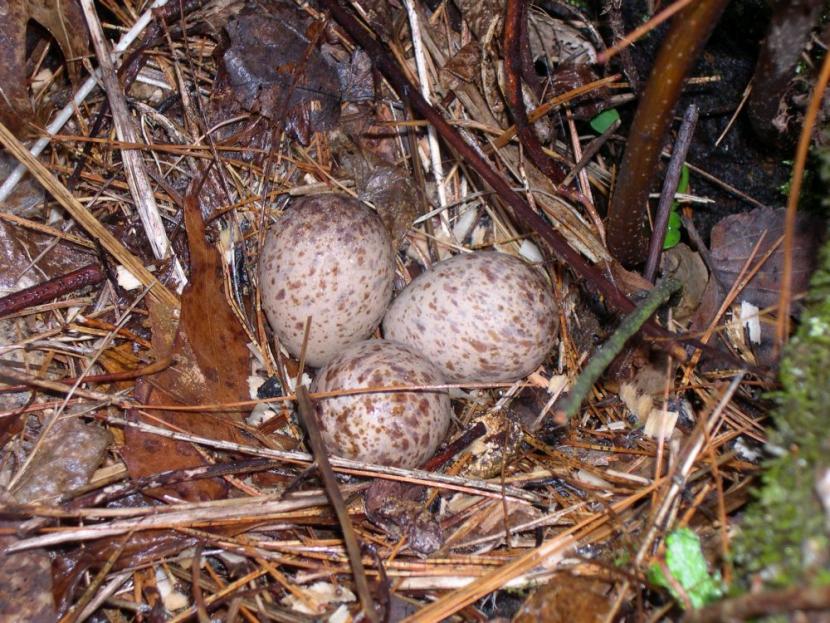 Walking amid clouds of swarming insects, a bird suddenly flushes from underfoot in thick vegetation along a trail. I draw a bead on that spot and step lightly. Somewhere at my feet is a hidden nest with a clutch of speckled eggs or a brood of chicks- tiny, blind and naked or bright-eyed and blinking, cloaked in downy feathers.

If I look carefully amid ferns and fallen leaves, I might find an elegant little woven cup of grass and pine needles tucked near the base of a tree, a fallen log or stump – right on the ground. 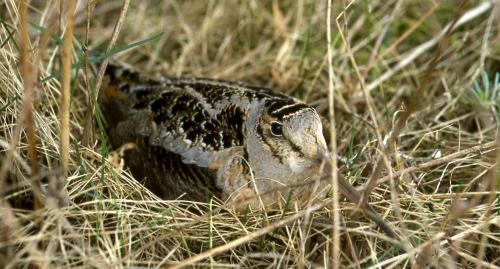 Is nesting on the ground foolish or time-tested?

A wide diversity of nest styles and strategies has evolved via natural selection; trial and error is unforgiving. You might assume the strategy of nesting on the forest floor too risky. Yet our most successful game birds – wild turkey, woodcock and ruffed grouse – all nest on the ground.

Game birds hatch as fuzzy yellow chicks like domestic chickens. They are precocious. They chip their way out of egg shells with a tiny “egg tooth” and emerge alert with bright eyes open, wearing downy feathers and ready to run within hours of hatching to escape potential predators. Game bird chicks leave nests to follow hens to feed and rest in the cover of sheltering ferns. Unlike college students, they don’t return to the nest!

Ruffed grouse and wild turkeys nest in shallow depressions often at the base of a large tree or stump. After leaving nests, chicks are particularly vulnerable. Turkey and grouse hens sound an alarm call causing the well-camouflaged poults to freeze in place while she attempts to lead a predator away from the vicinity of her brood, often while squawking to feign an injury – the old “broken wing” ruse. After two weeks, growing poults are able to fly sufficiently to roost off the ground at night – out of the reach of most predators.

Game bird hunters call ruffed grouse “partridges” - rhymes with “cartridges.” Pretty sure John Harrigan would concur that a college-boy naturalist sounds pretentious when saying “ruffed grouse?” My young daughter once asked wide-eyed in fear about the “rough grouch” when we heard a booming wing beat of the male’s courtship drumming.

The most common ground-nesting birds of farm fields, woodland edges and backyards are sparrows. Meadowlarks and Bobolinks favor the largest hay fields and pastures. The killdeer - in the Plover family - nests on bare gravel. In cities and college campuses, they nest on flat gravel rooftops near athletic fields. It cries out its name “killdeer!” when they flee.

Songbird chicks of are not precocious. They hatch naked, without feathers and blind, with eyes tightly closed. The most common ground-nesting songbirds of NH forests include Wood thrush, Hermit thrush, Veery and a loud little woodland warbler called the Ovenbird which sings an incessant “Teacher, teacher, teacher” song. Ovenbird nests resemble a Dutch oven tucked against the base of a tree – hence the name.

Along mountain hiking trails, you might locate ground nests of Northern Juncos which prefers sub-alpine habitats which remain too chilly until June for rearing young. The spruce grouse of the White Mountains and northern boreal forests is called “Fool hen” for its tame demeanor. Spruce grouse are ground nesters. While uncommon, they remain successful in the harsh alpine forests of high elevations in the White Mountains.

This time of year, you may find nests of tiny naked chicks or broods of fuzzy, buff-brown poults well-camouflaged and motionless at your feet. Once you spy one chick, others seem to emerge around it - seen only by the shiny glint of a tiny beak or beady black eye amid the leaves.

Although eggs or baby birds may appear abandoned, parents remain nearby – watching and waiting to reclaim the nest. Resist any temptation to touch eggs or admire young birds. The best thing is to leave the area to allow songbirds to continue incubating eggs or brooding and feeding chicks. Allow a game bird hen to recover her brood. If hiking with your dog, move out of the area to avoid further scattering chicks. Human scent attracts curious nocturnal predators including raccoons, skunks and weasels to the vicinity of ground nests. If you return to a remembered site in July, you may locate the empty nest which successfully fledged nestlings.

Another threat to chick survival is prolonged cold, rainy weather. While some birds attempt re-nesting in June, late broods yield smaller chicks by autumn. Sometimes birds simply skip any second attempt at nesting. “Better luck next year” is a shame after a long winter and arduous spring migration.

May is the most favorable month for nest success. New Hampshire abounds with insect protein. Pesky blackflies, mosquitoes, deerflies, gnats, midges and ticks are perfect food for feeding growing nestlings.

There’s a silver lining - if not for bugs, we’d enjoy far fewer birds in our woods and backyards!