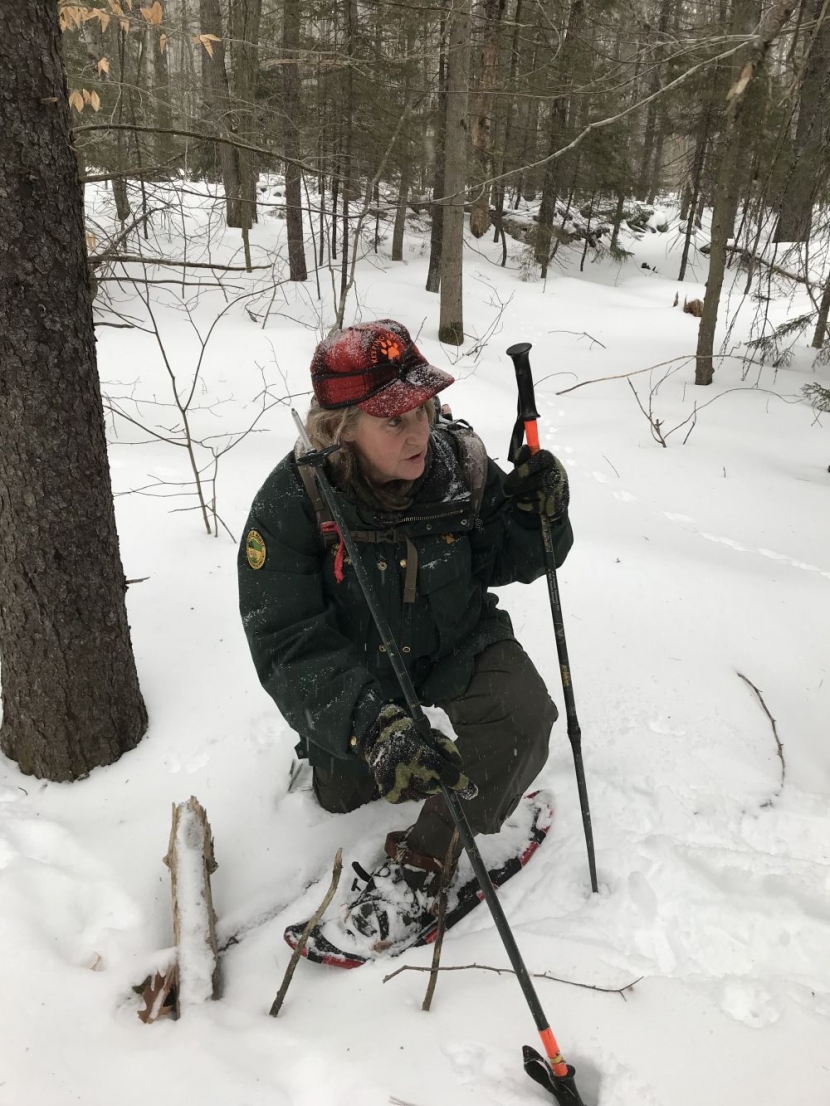 Wildlife biologist and educator Sue Morse of Keeping Track during a recent tracking workshop sponsored by The Fells in Newbury, NH.

NEWBURY -- Master wildlife tracker Sue Morse smiled comfortably as adult students lashed on their snowshoes and slung daypacks on their backs in anticipation of a guided animal tracking group hike.

Morse didn’t pre-scope the location in advance, but it didn’t matter: She would find tracks or signs of wildlife travel and feeding in nearly any patch of forest. Morse can explain myriad connections between animals and their habitats as well as any wildlife biologist in the Northeast.

With an intimate knowledge of wildlife behavior, habits and homes, Morse leads indoor presentations, youth programs and field workshops for Keeping Track, the organization that she founded 25 years ago in Vermont. She has been teaching longer, perhaps for 45 years. (She admits she’s “not a numbers person”). 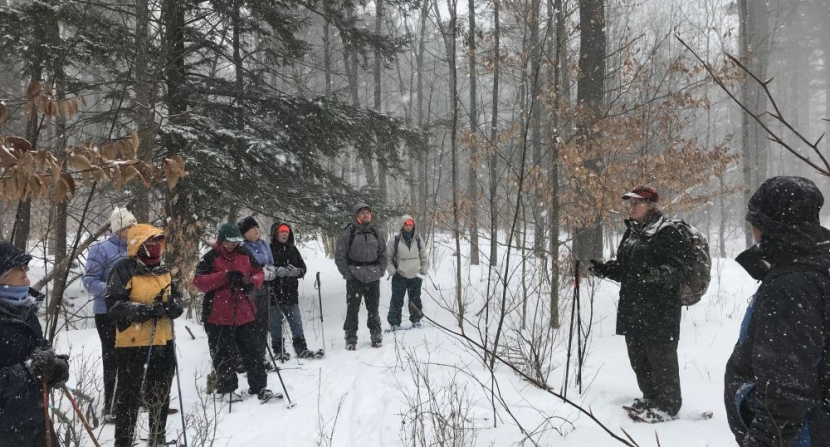 I had the chance to join Sue, her interns and other hikers on a snow-squally hike near Lake Sunapee. The near-Valentine’s Day themed event was entitled “Love Notes and Tweets from the Forest: Making Sense of Scent Markings.” The excellent program was sponsored by The Fells Historic Estate and Gardens in Newbury, which is adjacent to the Forest Society’s Hay Forest Reservation. The description promised one would “become a better tracker by understanding habitat and behavior” and did not disappoint.

“Half of wildlife tracking is knowing where to look. The other half is looking.” Morse is fond of having students repeat that mantra.

The guided group excursion soon encountered tracks of red squirrel and tinier galloping tracks of mice. We found the walking gait of a fox and of a white-tailed deer. A small narrow furrow in the snow was most likely left by a shuffling red-backed vole or a carnivorous short-tailed shrew in pursuit. 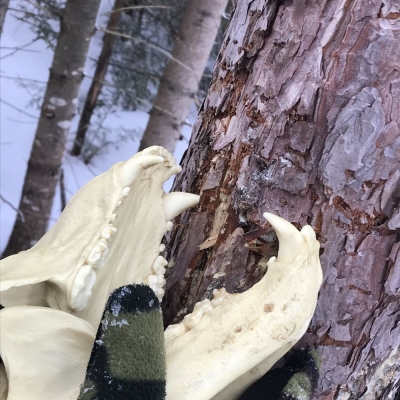 Fishers and bears, oh my!

Our own snowshoe tracks meandered while following a walking fisher that oddly didn’t feature the stereotypical bounding pattern of most fisher tracks. This unique “boundless fisher” track kept us following it for a long distance. Its five-toe print is diagnostic to the weasel family, of which the fisher is a member.

Hard to tell why this particular fisher spent so much time walking between stretches where it followed the more typical bounding pattern. The modest Morse was quick to admit “sometimes the only valid answer to a puzzling tracking question is the simple ‘I don’t know’ reply.” The single fisher track soon became two distinctly different size fisher tracks, likely a male and female. Late-February is peak breeding season for weasel family members.

As snow squalls increased, threatening to fill and obliterate tracks in the snow, Morse drew our collective attention to trees browsed in autumn by deer, moose and even bears. We found a porcupine’s favorite hemlock tree meal and a sugar maple with outer bark entirely girdled by porcupine incisors.

A red pine offered an object lesson in black-bear scent marking. Morse described what her students have dubbed “Morse-code:” a dot-dash pattern across the wounded bark of a red pine where sticky pitch contains coarse black bear fur.

To illustrate the creation of the dot-dash pattern, Morse introduced us to a bear skull she calls “Yorick.” “Alas, poor Yorick we knew him well,” quotes Fells Education Director Brick Moltz.

With bear skull in hand, Morse illustrated how the bear’s upper canine tooth punctures soft, aromatic red pine bark, anchoring the skull with a “dot” while the lower jaw drags a canine tooth laterally to make the “dash.”

Bears bite and rub red pines to leave scent marks for communication with other bears — conveying territorial imperative and reproductive status in a kind of forest equivalent of social media or a dating app. 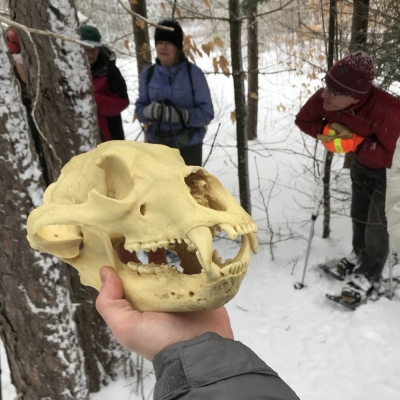 “Many people are first attracted to our tracking workshops because they are sucked in to the idea of following animals. They think that is what Keeping Track is all about. But the next thing you know, they are learning more about the plants and finding local game trails the animals require to survive.”

Even before he became education director at The Fells, Moltz brought students to Morse’s presentations. “If you understand what animals are eating and how they are moving in their habitats, then you become a better tracker,” he says. 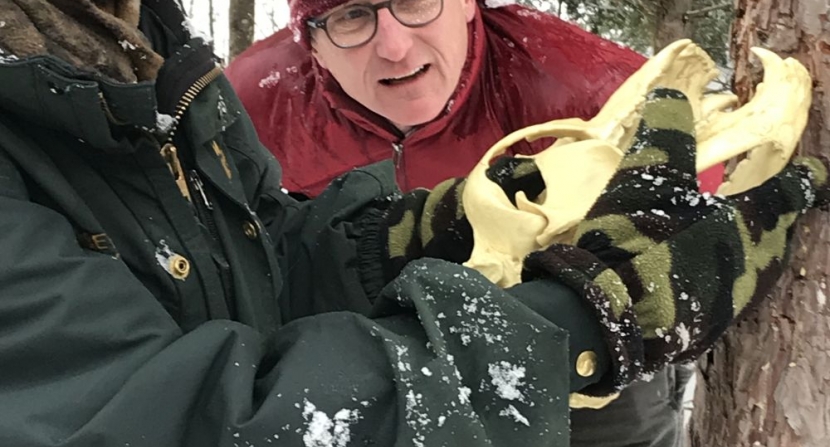 Students learn from the skull of “Yorick” how black bears use the soft aromatic bark of red pine to create scent mark posts in the sticky pitch to communicate. Photo DA

“Well, animals have energy budgets, just like we do,” Morse said. “We need to be realistic about our own energy budgets and think about accommodating the budget needs of wildlife. We need to figure out how to create a network of wilder places, refugia, sanctuaries. We don’t need to be active on every square inch.”

What about bears or mountain lions and the often-lurid stories large and dangerous animals?

Morse chuckles. “If you think about the most life-threatening encounter you’ve ever had, it is most likely to have been caused by conflict with other people rather than wild animals.”

Morse advocates designation and protection of core habitat areas linked by connecting corridors to facilitate movement of wildlife across larger forested landscapes of the Northeast. “If these species are present across four seasons all on a chunk of land, year round and from year to year, that’s important information to those doing land conservation planning.”

This is what Keeping Track is all about: helping to set goals for conservation planning at the landscape level while working at a regional scale with local teams of trackers. In New Hampshire’s Ossipee Lake Region, tracking and documenting is accomplished by the Bearcamp Trackers led by Chele Miller. In the Newfound Lake area, a former Forest Society colleague and Keeping Track advisory board member, Martha Twombly, has assembled a team of trackers.

She says the public is becoming more “refined” in its understanding of the natural world but she worries about the area’s demographics. “We see (a lot of) older clients and live among an older population so I wonder about recruitment of younger people.” Morse said.

“I would suggest that in increasingly politically polemic times, that we ignore extremists on both sides and let’s cooperate,” she says. “And we had better hurry.”

To learn about The Fells, including sponsored upcoming education programs, visit the website www. thefells.org.