Forest Journal: A Hen Worth Hunting For 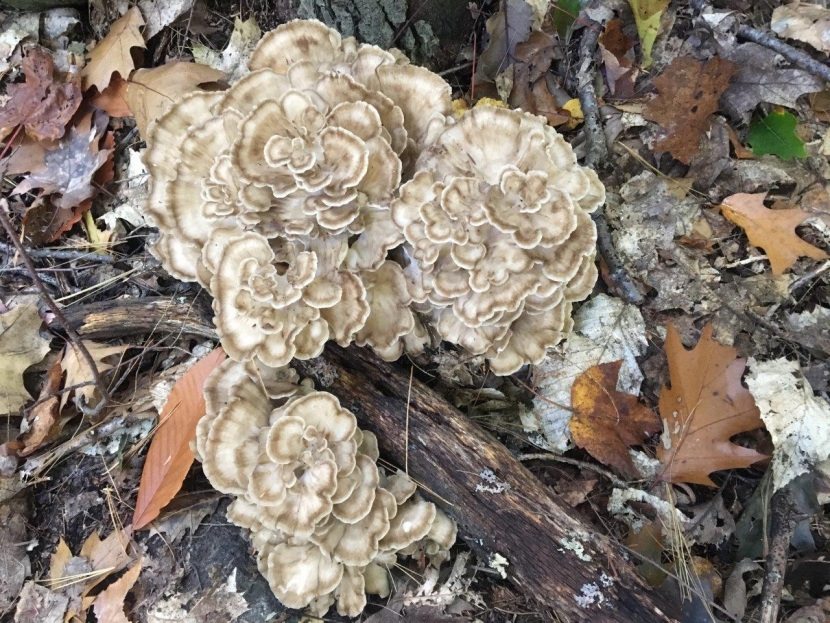 Throughout New Hampshire, fall hunting seasons are already underway. Sure, you could dust off your bow and try for a wild turkey hen, but there is another type of hen in our forests that is just as delicious and available for those who know how to hunt for it.

I’m talking about Hen of the Woods (Grifola frondosa), an amazing edible and medicinal mushroom that is found throughout the state every autumn. Not to be confused with Chicken of the Woods (Laetiporus, spp.), which is bright yellow, grows in flat shelves, and actually tastes a bit like chicken, Hen of the Woods looks like a fleshy brown head of lettuce and grows at the base of large, old oak trees.  It also could be said to resemble the ruffled rump feathers of a dun-colored laying hen, which is my best guess as to where its common name comes from. 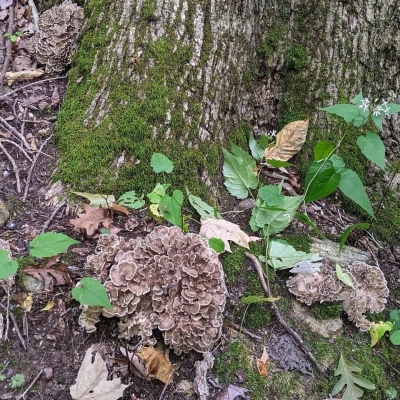 Hen of the Woods mushrooms growing at the base of an oak. Photo by Mary Kulis Rapp.

Hen of the Woods is native to temperate broadleaf forests in Europe, Asia and eastern North America. In Japan, where this mushroom has been highly prized for centuries, it is known as “maitake” (pronounced my-TOCK-ee) which translates to “dancing mushroom.” Legend has it that feudal lords would compensate their subjects handsomely for prime specimens of maitake — an equivalent weight in silver — causing the finders to dance with joy. Since multiple clusters of maitake on a single tree can sometimes weigh more than 50lbs, this could indeed be cause for celebration!

The first time I tasted Hen of the Woods, I declared it my favorite mushroom ever. Dozens of wild mushroom dinners later, I haven’t revised that opinion. The best way to describe the flavor is deeply woodsy — this is a mushroom lover’s mushroom — with a satisfyingly substantial, almost chewy, texture. I often prepare it simply by shredding it into bite size pieces (after cleaning) and sauteeing it in a skillet with butter or oil until well browned. Add a sprinkle of sea salt and maybe a bit of fresh thyme, and serve on slices of toasted crusty bread. It’s like taking a bite of an October forest for me!

Hen of the Woods is not only delicious, it’s also good for you. It is low in calories, a good source of fiber, and rich in Vitamins D and B3 (niacin) and antioxidants.   A polysaccharide (complex sugar) found in the mushroom called beta 1,6-glucans is currently being studied for its immune boosting and anti-cancer properties. Numerous scientific studies using animal models have shown that beta 1,6-glugans increases the activity of immune cells, causing them to recognize and destroy tumor cells of lung, breast and liver cancers more effectively. More human trials are needed to prove its potential as a therapy for cancer patients, and some of these are already underway.  Maitake extracts are also being evaluated for regulation of diabetes, as well as for treatment of HIV/AIDS. Clearly the ancient Asian cultures were onto something in valuing this mushroom’s healing properties. 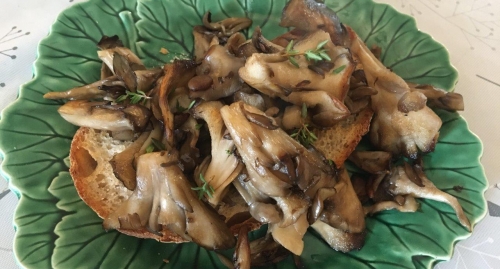 "Hens on Toast" is a favorite way to eat this mushroom. Photo by Carrie Deegan.

Ecologically, finding Hen of the Woods is not a good sign for the oak tree host. The mushroom is parasitic, causing a white butt rot in the heartwood of the oak’s trunk and larger roots, which eventually leads to the tree’s decline and demise. All of this damage is happening under ground and inside the tree, where the mushroom’s mycelium (the thin branching filaments that do all the decay work) are found. The process is a slow one, and it can take several decades for Grifola frondosa to fell an oak tree, during which the fungi’s fruiting body — the Hen of the Woods mushroom itself — pops up annually in the fall. That last part is lucky for you, even if not for the oak tree.

Hen of the Woods is really fun to search for and find. I won’t say it’s “easy” to find one, since I have spent hours jogging from oak tree to oak tree in what looks like a perfect forest and come home empty handed before, but the habitat is less tricky to recognize than for many other native fungi. Once you get the hang of identifying oak trees, all you have to do is check the forest floor around their trunks, which can make it a fun scavenger hunt for the whole family. The thing about actually eating wild mushrooms, however, is that you should really know what you’re doing.  The old mushroom hunter’s saying that “every mushroom is edible at least once” is a darkly humorous reminder that mistakes can be deadly. Hen of the Woods does have some unpalatable look-alikes that could sprout in the same habitat (though thankfully no poisonous ones) and you should always be 100% confident of identification before consuming any wild mushroom. Local mushroom experts and enthusiasts are usually happy to help with identifications; look them up online and on social media.

If you think you’ve found a Hen of the Woods but aren’t confident of your ID, the good news is you don’t have to pass on trying that delicious woodsy flavor. In the past 20 years, Asian growers have developed cultivation methods for Hen of the Woods on inoculated sawdust blocks, and the mushroom is now commercially available in many grocery stores. I’ve tried some maitake purchased from Market Basket in Concord, and am happy to report it is every bit as tasty as the wild foraged variety. My advice is not to skip the forest fungi scavenger hunt this fall — it’s definitely worth it — but in New Hampshire there is certainly more than one way to “bag a hen.” 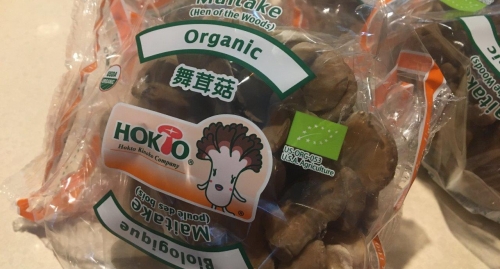 Carrie Deegan is Community Engagement & Volunteers Director for the Society for the Protection of New Hampshire Forests. Contact her at cdeegan@forestsociety.org.