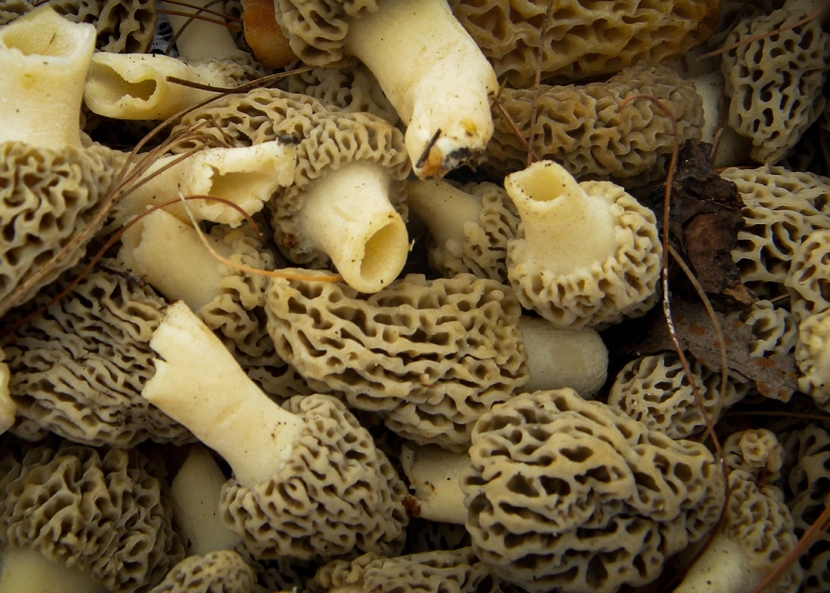 The heart of mushroom season occurs in mid-summer through the autumn of every year. In rainy years, mushrooms start popping out of damp soil and rotting logs in July, an amazing variety of shapes, sizes and colors that continues right up until the ground freezes in late October. But there is one mushroom that bucks the trend, sprouting brazenly in spring with enough chutzpah to drive the local mushroom enthusiasts crazy: the morel.

Morels play second fiddle only to truffles in terms of their notoriety and desirability in the eyes of foragers and wild mushroom connoisseurs. They are not large or colorful mushrooms, but with their unique honeycomb-like caps and hollow interiors, morels (Morchella, spp.) are a wonder of early spring. Carol O’Brien Boudreau, a local mushroom enthusiast and experienced forager from Atkinson, NH, thinks the allure of morels is understandable.

“They are the first mushrooms you can find each spring, when winter is over and everything is finally growing again” she says. “It’s a great time of year to be out in the woods.”

Morels pop up quickly and last for only a week or two, their timing often coinciding with apple and lilac blossoms, or when ostrich fern fiddleheads are ready for picking. “They’re also pretty difficult to find, which makes it like a treasure hunt,” says Boudreau. “When you finally do find some, it’s super exciting!”

I myself have only found morels only once, and entirely by accident. I wasn’t expecting to almost step on what looked like perforated alien ice cream cones, and it was early enough in my mushroom identification days that I didn't feel confident enough to eat them. “How cruel,” says Boudreau when I relate the story to her. To Boudreau, morels are the most delicious of mushrooms. Often described as nutty or earthy, they are best prepared simply by sauteing in butter and maybe adding a little cream or dry sherry to finish. Or so I’ve been told.

Morels are found across the northern hemisphere, in forested areas of Asia and Europe as well as coast to coast in North America.  New Hampshire is “morel-poor” compared to many other places in the United States, thanks to acidic soils caused by the weathering of our abundance of granitic rock. In places where morels are abundant, like the midwest or pacific northwest, entire festivals are sometimes held in their honor. The National Morel Mushroom Festival in Boyne City, Michigan lasts several days and includes seminars, live music, and tasting of morel dishes prepared by local chefs. One festival in Illinois often includes a competitive morel hunt, where 500-700 hunters board a dozen or more buses and are shuttled to an undisclosed location to find as many morels as they can in 90 minutes. The winner nets only a few hundred dollars, but bragging rights for the year as “Illinois State Mushroom Hunting Champion” are priceless!

If you want to find morels, it’s not enough to wander the woods at the exact right time of year and perfect weather conditions (when daytime temps first reach the 70s and soil is around 50°F, after rain but not too much rain). You also need to know your habitats and trees.  Like many mushrooms, morels associate with particular species of trees, their underground network of thread-like mycelium engaging with tree roots and trading nutrients and water for sugars made by the trees during photosynthesis.

In New Hampshire, yellow morels (the most common variety) are often found near ash, elm and old apple trees. Boudreau tells me she has hunted for hours and hours, whole days even, only to find a patch of morels in her own backyard when she returned home.  “After consulting with UNH Extension foresters, it turned out that these two big, beautiful trees in my yard are mature American elms.”  Thanks to Dutch elm disease, mature elms have been a rarity in New Hampshire for decades; most have perished.  Ash may not be far behind as an invasive insect pest, the emerald ash borer, is currently decimating populations of green, white and black ash in our region.  Boudreau worries about what the loss of these trees will mean for the future of morels in this area.

“It’s a classic example of how everything is so interconnected,” she says, “if we lose one part of the system, we may very well lose others.”

This spring, I am determined to find morels, intentionally this time. I’ve already been out searching in the Connecticut river valley, where soils should be loamier and less acidic than most in the state. 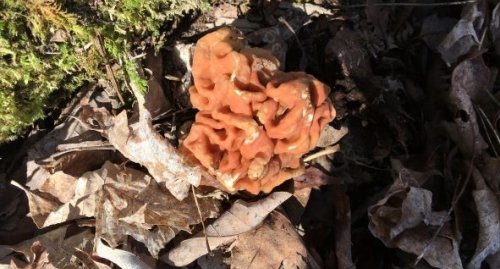 A FALSE morel. (Photo: Carrie Deegan)
So far, all I’ve turned up is a single false morel, the only poisonous mushroom that could reasonably be confused with a morel at this time of year.  It had nothing of the orderly honeycomb pattern of a morel, and was more like a folded blob on a stem, so I wasn’t fooled. Still, it’s an important reminder to be 100% sure of any identification before even considering turning your discoveries into dinner. It’s early and cool still, so I’ll wait and put in more time soon, walking slowly and watching the ground intensely as I go.  It’s probably best that I haven’t found a morel yet, or I may not have written this column at all.  Productive morel spots are famously guarded and kept secret, even from the closest of friends and family members. As Carol O’Brien Boudreau tells me, somewhat sheepishly, “I love to spread the joy of finding mushrooms… when people ask me about mushroom hunting I often take them out to some of my best foraging sites so they can learn. But if I find a morel spot…no, I don’t think I’d share that.”

Carrie Deegan is Community Engagement & Volunteers Director for the Society for the Protection of New Hampshire Forests. Contact her at cdeegan@forestsociety.org.