I guess we looked a little odd, or the State Police officer would have just driven by.

My son and I had parked the van along a quiet back road last week and hopped out. He wielded a knife, and I wielded a camera. By the time the officer slowed his cruiser to a stop, we were so engrossed in our task we didn’t even notice we were under surveillance.

“Everything okay,?” he asked through an open window. 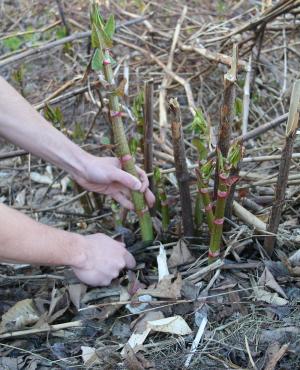 It was in fact more than fine. We had found a patch of Japanese knotweed that was just the right size for harvesting and were happily cutting stalks, taking pictures for this column and talking about knotweed muffins, coffeecake and pie.

That’s not to say I’m ever really happy to find Japanese knotweed growing anywhere. It’s a beast of a plant, an invader from Japan that is bent on taking over parts of our landscape, smothering our native plants in the process. It’s monstrous enough to be #36 on the list of 100 Worst Invasive Species worldwide. It also happens to be a monster that’s tasty if you harvest it around this time of year, when the stalks are about 8-12 inches high, but more on that in a minute.

Have you seen this bad boy? You probably have clumps of it near you, and you probably pass massive colonies of it along the roads. An FBI "Most Wanted" poster would describe it like this: Shrub grows in clumps up to 13 feet tall, mainly along highways and along rivers. In spring, be on the lookout for dried brown stalks from last fall that lie in crumpled, messy piles. New shoots look like innocent asparagus stalks with a reddish tint, but are hollow and crisp. Use caution.

Unfortunately, like many invasive plants, Japanese knotweed was brought to American gardens on purpose, as an ornamental. Well-known landscape architect Frederick Law Olmsted, the designer of Boston’s Emerald Necklace park system, planted it like crazy, not understanding that it would act differently here in America than it did in Japan, where it’s pretty tame.

Fast forward to today, and Olmstead’s decorations are Doug Cygan’s nemeses. Cygan is the invasive species coordinator for the state’s Dept. of Agriculture, and part of his job is to work with other groups around the state to eradicate or at least control what is now a long list of invasive plants and animals.

“Knotweed is one of our most ubiquitous invasive plants in the entire state, threatening not only areas along the state’s highways but also a majority of our waterways,” Cygan said.

It’s so pervasive along highways and rivers because it spreads both by sending forth its seeds and by its roots. Any bit of root that breaks off and lands in soil can sprout a new population. So snowplows spread it along roadways and natural ice scouring spreads it along rivers.

Cygan said the reason knotweed and other invasives are threats to our ecosystems is the lack of parasites, diseases, insects and other predators that keep the invasives in their place in their countries of origin but don’t live here.

That gives invasives free rein, and many environmental groups, towns and the state and landowners have a Herculean task of trying to control them, so far with mixed results. Control efforts range from herbicide campaigns to the banning of invasive plants previously sold in nurseries, to community “pull a weed” events to a recent effort by the N.H. Invasive Species Committee to provide every town with an online tool (wildlife.state.nh.us/invasives) to target priority species.

It’s hard to find anything good about invasive species, but there is one good thing about Japanese knotweed. It’s edible, and it tastes like mild rhubarb or granny smith apples. Knotweed is a kind of dark star in wild edibles circles. Russ Cohen, who gives 40 talks a year about how to find and eat wild plants, lives just south of the N. H. border and wrote one of my favorite how-to books: Wild Plants I Have Known – And Eaten.

His philosophy is that even though eating invasive knotweed could never stop its path of destruction, it does provide a little sweet revenge.

“It has a kind of man- bites- dog appeal,” Cohen said. “We’re supposed to hate this plant, but while we’re doing that, we can be nibbling on it.”

Cohen’s book has a chapter devoted to knotweed called “If You Can’t Beat It, Eat It.” It contains a delicious knotweed-strawberry pie recipe (including tips for a great crust from his baker mom). My son has baked this pie each spring since attending one of Cohen’s workshops, which sparked what I suspect will be a lifelong interest in foraging for wild edibles.

“If you already like being outside, knowing what you can forage and nibble on just makes it that much more fun and increases your affinity to nature. It makes you profoundly aware of seasonal changes, the rhythms of nature, when a plant is ready to eat,” Cohen said.

For knotweed, that time is now, when it’s at the “asparagus” stage. You can simply cut a stalk and munch on it, or put it into any recipe that calls for rhubarb. Some caveats: Never pick knotweed in an area you suspect has been sprayed with herbicides. That’s why I stick to the back roads or areas away from roads altogether and inspect the patch to make sure it looks healthy. And be careful with stalks you cut but don’t eat – if they land in moist dirt, say in your backyard, they could sprout.

One person who won’t be eating his enemy anytime soon is Cygan, who has spent the last two years spraying knotweed clumps along highways with a 5 percent solution of Roundup.

Fair enough. If I had his job, I’d probably feel the same way. The sweet revenge thing is appealing to me, though, so I’m happy to munch on knotweed. If ever a sprout dares to show up in my yard, though, it’s a goner. As Cygan put it, you have to draw the line somewhere.

How to Get Rid of Knotweed

There are two eradication measures landowners can take to get rid of knotweed before it spreads. Cygan recommends spraying plants in the fall, after flowering, with a 5 percent solution of Roundup. If you’re looking for an organic method, smothering is the way to go. Smother the clump and 10 feet beyond with three layers: mulch, heavy construc tion-type black plastic, and then more mulch. Let it lie for three to five years. Never mow knotweed! This just acts like pruning, which will be most welcome to the plant and help it to thrive.

How to Eat Knotweed

Cut stalks when they’re 8-12 inches tall. Peeling them is optional – some people think the peeling is stringy while others think peeling is too fussy. Steam them for 2-3 minutes, or use in recipes calling for rhubarb, or go online to www.newenglandwild.org, the website of the New England Wildflower Society, and search for Cohen’s knotweed recipes, or try eattheinvaders.org/Japanese-knotweed.

From Wild Plants I Have Known … And Eaten, by Russ Cohen

5 Tbsp. butter (should be cold)

5 Tbsp. vegetable shortening or lard (should be cold)

Put flour into food processor. Cut up shortening into big pieces and add to food processor – the less handling the better. Pulse until coarsely chopped. Add cold juice and pulse until mixture begins to ball up and the blade stops or slows substantially. Dump mixture onto wax paper; chill in refrigerator for at least one hour.

3+ c. peeled, sliced Japanese Knotweed stalks (cut each piece in half length-wise to reduce any trapped air space inside)

Preheat oven to 425 degrees. Cut ball of dough in half, roll out one half into a circle about 1/8-inch thick, adding flour to the board/pin/dough if sticky. Place in pie plate. Mix filling in bowl; if runny juice accumulates in bottom of bowl, stir a tablesppon or so of f lour into the mixture. Pour filling into pie plate. Roll out second half of dough and place on top of filling or cut into ½-inch strips and place over filling in a lattice pattern. Trim all but ½ and inch of surplus dough from pie plate rim. Crimp doug together along pie plate edge with fork. Poke 6-12 holes in top crust (if not lattice) with fork. Place on a cookie sheet and insert into center rack of oven. Bake for 20 minutes at 425, then 25 minutes more at 400 degrees. Pie is done when juice oozes out the top crust and begins to run onto the cookie sheet. If the crust is getting too brown in one or more places before the rest is done, place a small piece of aluminum foil over that spot to stop further browning.