It’s no longer the “dead of winter” as woodland wildlife awaken. 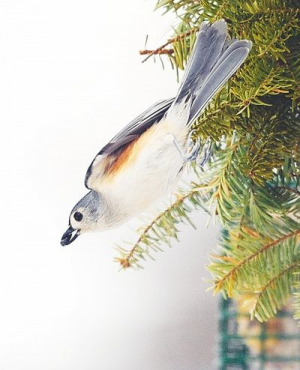 We’re gaining daylight at sunrise with an extra minute at sunset. Increasing daylight, not warmer temperatures, begins to increase wildlife activity. Even while new snow falls, the first pulse of impending spring begins in February. 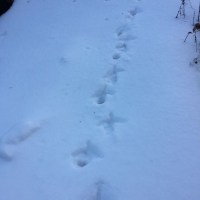 Animals – humans included – measure light and dark via changes in concentrations of melatonin. In turn, melatonin influences production of hormones that influence sleeping and waking cycles. For wildlife, increasing melatonin in autumn triggers the growth of thicker fur and the onset of fat storage and hibernation. Increasing light in late winter lowers melatonin which triggers breeding seasons. Valentine’s Day coincides with the onset of winter breeding for NH fur-bearing mammals: foxes, coyotes, bobcats, ermines, weasels, mink, otters, fishers… even skunks. Love will soon be in the air! 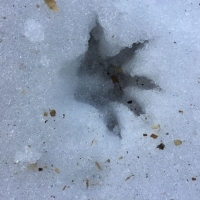 At home on our Tree Farm, weeping willow branches are yellowing. There’s a tinge of crimson appearing on buds of red maples and ornamental crabapples. Another early harbinger of spring is increased activity by birds which remain winter residents, the species best-adapted to our northern winters.

The front porch sunflower feeders host white-breasted nuthatches, chickadees and tufted titmice. These three hardy bird species are already tuning-up for the spring symphony. They’ve begun taking to twitter – in the original sense. These birds are adept at tucking sunflower seeds into bark crevices of forest trees and gleaning frozen overwintering insects from beneath tree bark. All three species nest in hollow tree cavities. Wooden houses allow them to begin breeding and egg-laying much earlier than migrant birds which build exposed nests and rely on fruits and flying insects for food. Winter birds are authentic, flinty Yankees. Their motto seems to be “Live, Freeze Or Fly!” 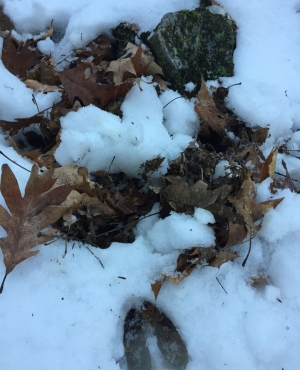 Other forest-dwelling birds also begin breeding in February: owls and woodpeckers. Woodpeckers begin territorial drumming to attract mates. Barred owls set-up territories and begin nesting in hollow tree cavities or vacant summer hawk or heron nests over wetlands. Barred owls are the most common NH owls. Tragically, many are struck by cars as they stoop to capture rodents crossing snowy roads at night.

Fresh snow re-sets the mammal tracking canvas and creates a time-stamp. After the 2” snowfall Monday night changed to sleet and freezing rain on Tuesday, the tracks were all fresh by Wednesday. In the woods, tracks revealed deer, turkeys, gray squirrels and white-footed mice are our most common winter neighbors.

Relatively shallow snow is allowing deer and turkeys to move night and day respectively. Beneath sheltering hemlocks or pine where snow is shallow, deer and turkeys are tilling-up snow to reach the red oak acorns layered in frozen leaves beneath. I found scattered oak acorn husks and crumbled nut meats in sheltered, south-facing locales. A bumper crop of acorns is keeping squirrels, turkeys and deer fat and happy. 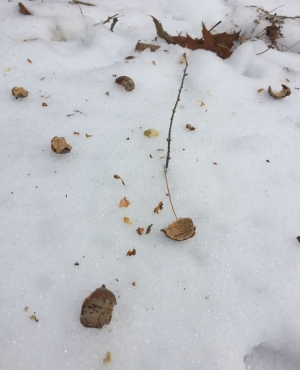 Forest rodents – mice and squirrels – are active during thaws. I spotted the tracks of a wide-ranging fox, coyote and bobcat. These three predators are energy efficient, they move in direct lines over a large home range while hunting small rodents. Raccoons have been active during the prolonged January thaw when the average temperature was seven degrees above normal for the month. I found fresh star-shaped opossum paw prints right outside our hen house and along the snowy hem of open water in a brook. Other mammals have been harder to find this winter. I’ve not tracked a fisher but a neighbor posted a wildlife camera portrait of a fisher eating grapes off a stump. 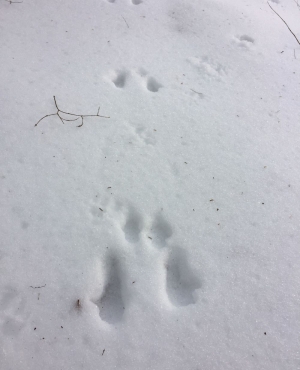 Wildlife population changes from year to year in the local woods do not necessarily indicate regional or statewide trends. However one annually recurring theme is that even as February remains cold and snowy, birds and buds and wildlife tracks reveal how longer days and shorter nights are bringing the first pulse of spring to the winter forest.