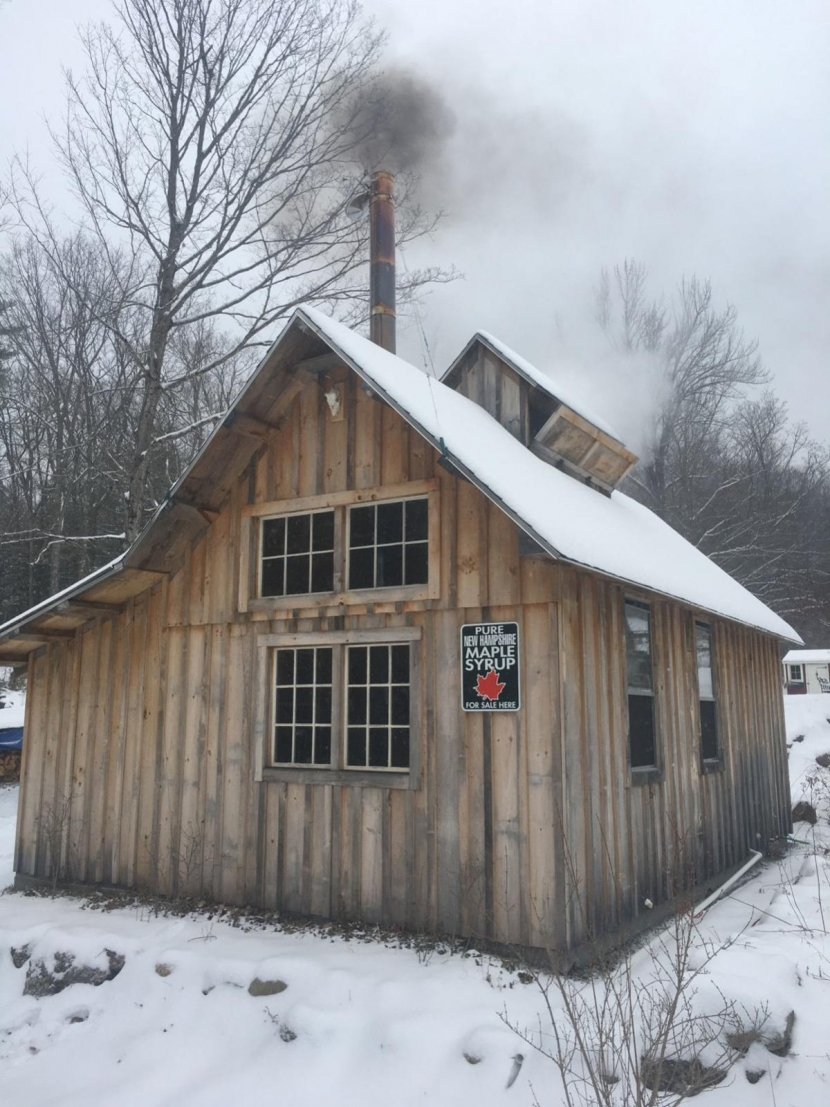 The first boil of 2020 at the Andersons’ Meetinghouse Hill Maple — on Feb. 1 — took advantage of mild late January temperatures. Sugarhouse smoke rolls dark when the fire is first stoked with dry pine.

A recent modest snowstorm cancelled school. My son, Cody arrived with his future brother-in-law as a sugarhouse apprentice for an afternoon of learning while boiling sap.

The boil followed the second time this season they gathered nearly 100 gallons of sap and converted it all to steam in about 3 hours: an early season tune-up to sweeten the pans and be ready for longer and larger sap runs.

Yes, Valentine’s Day and President’s Day seem early for maple season. “Too early to tap” I would have insisted before this year. We’re running an experiment this year having taken a gamble to tap maples in late January compared to late February for the traditional March maple season.

Last year, our first boil was two weeks late: Saint Patrick’s Day weekend, March 16-17 to start the season. This year, the first boil on February 1 is six weeks ahead of last year.

Part of the reason is weather-related. “Sap flows according to the temperature, not the calendar” Cody argued. But the new tap technology played a role in our decision as well.

What do erratic winter temperatures mean for making maple syrup? Does tapping trees in January to catch the earliest sap flows potentially foreclose the latter half of the season in late March and early April? After last year’s late start, we produced nearly half our total syrup in April. Maple season is nothing if not unpredictable. 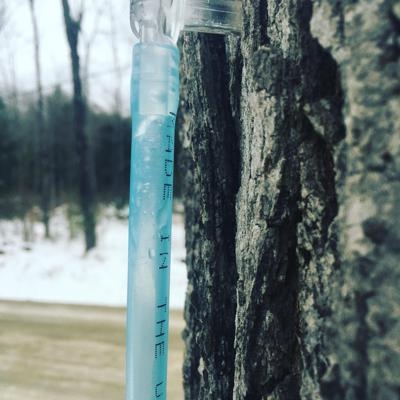 If prolonged weeks of cold temperatures return, the sap won’t run and tap holes could begin closing in March. Modern taps have been designed to help keep air and bacteria from speeding the closing of tap holes.

By late January with daytime temperatures warming into the low 40s, Cody didn’t want to wait another month to tap while watching sap runs pass us by.

We talked about long-range weather forecasts. He had anticipated my resistance and had prepared for a debate. Everything in the woods was ready, so I conceded. He seemed almost disappointed. “We’ll call it an experiment” I added.

Cody pulled the (cordless drill) trigger and began tapping on January 25th. We boiled the first run of 100 gallons of sap on February 1, just enough to “sweeten the pan.” We boiled again on February 6 before the freezing temperatures returned.

One caveat: we are small scale, backyard maple producers. At our micro-scale, the gamble is minimal. It’s a family-run, “old fashioned” sugarhouse. The sap is gravity-fed to roadside tanks. We’re traditional in the sense of remaining labor intensive. We don’t have vacuum pumps or reverse osmosis or an oil-fired or natural gas fueled evaporator. Our evaporator is wood-fired. We’ve visited sugarhouses with modern innovations including sap tank monitors linked to pumps controlled remotely via Smartphone apps. While we envy that stunning technology, we just don’t have the maples to justify upscaling our investment.

Cody and friends did the weekend labor of inspecting lines, repairing squirrel-chewed sections, tensioning mainlines and improving the layout of lateral tubing. Annually, we replace all the plastic taps and replace most of the flexible  “drops,” 5/16” blue plastic tubing that leads from each tap to the horizontal tubing that drains to the larger diameter, rigid mainline. Clean fresh tubing yields more sap for a longer time.

Natural bacteria and air reaching tap holes signal the tree to begin closing the wounds. The new-fangled plastic taps have a small check-valve ball to seal off airflow when the pressure decreases overnight in the tree. Overnight low temperatures in the 20’s and daytime high temperatures in the 40s drive a pressure differential that causes sap to flow. The greater the shock, the higher the rate of flow. 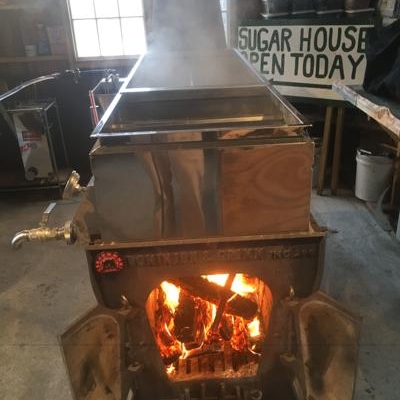 The wood fire burns hot as steam rises from the evaporator at Meetinghouse Hill Maple sugarhouse.

At the end of our second boil, we pulled off our first gallon – 8 pints of 2020 syrup. It didn’t grade quite as light as “Golden, Delicate taste” so we labelled it “Amber Rich” which is the grade we made the entire first half of last year before making “Dark/Robust” and “Very Dark / Strong taste” during the latter weeks of the season last April.

Our NH winters increasingly feature erratic temperatures reminiscent of the mid-Atlantic States, not New England. The impacts on maple sugaring include a technological arms race to enable a longer window of viable sap flow by utilizing sealed systems and negative pressure via vacuum.  If winters continue to get shorter with consistently milder temperatures and a protracted January thaw, it is very likely more maple sugaring activity will skew earlier in winter

It wasn’t that long ago, maple sugaring traditionalists in NH continued to insist that Town Meeting Day in early March was the right time to begin tapping. Maple producers in the White Mountains and North Country have colder temperatures and a deeper snowpack. They will likely continue to making syrup into April. In the southern tier, timing the tapping season is getting tricky. 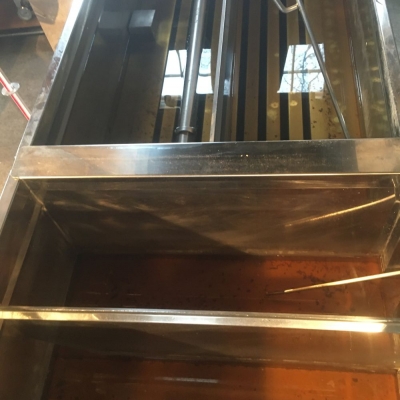 The maple industry has always adapted. The epicenter of mass syrup production continues to be Quebec compared to historical US production. Another factor is the overall regional health of sugar maples with concerns for less frequent sugar maple seed crops and limited seedling regeneration due to multiple stresses.

Stresses include milder winter weather, a lack of consistently deep snow to function as winter insulation for surface feeder roots and tender seedlings, the changing soil chemistry, insect infestations, summer droughts and high white-tailed deer densities in the suburbs.  Some speculate these changes could leave an aged cohort of ailing maples without ample regeneration and recruitment of younger trees.

We boil with all of these things in mind. We have music playing and drink a few low-brow beers and imagine we are among a “hobbyist” scale segment of a dying breed. “Mohicans of maple,” or something like that?

I wonder if my grandkids will see the maple season shift permanently and conventional wisdom die… if not the aging trees themselves. I think about farmers, fishermen and foresters that made their livelihood from the land and those who have watched their industries fade.

I have not heard many pessimistic maple producers even as they acknowledge the challenges of changing winter weather and tree health concerns. There is something intrinsically optimistic about sugar-makers.

If that were not true, nobody would still be making syrup the old-fashioned way. 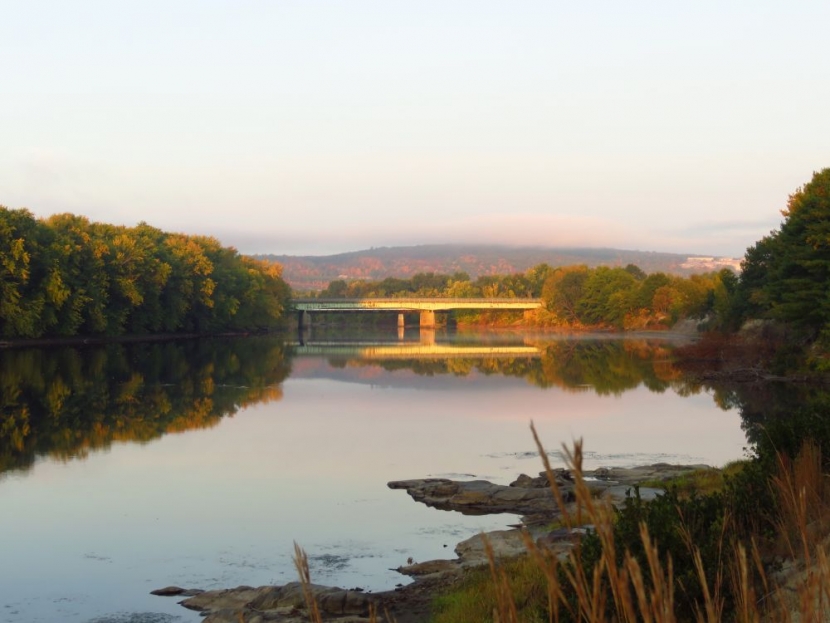 Your support as a member helps conserve New Hampshire's forests.