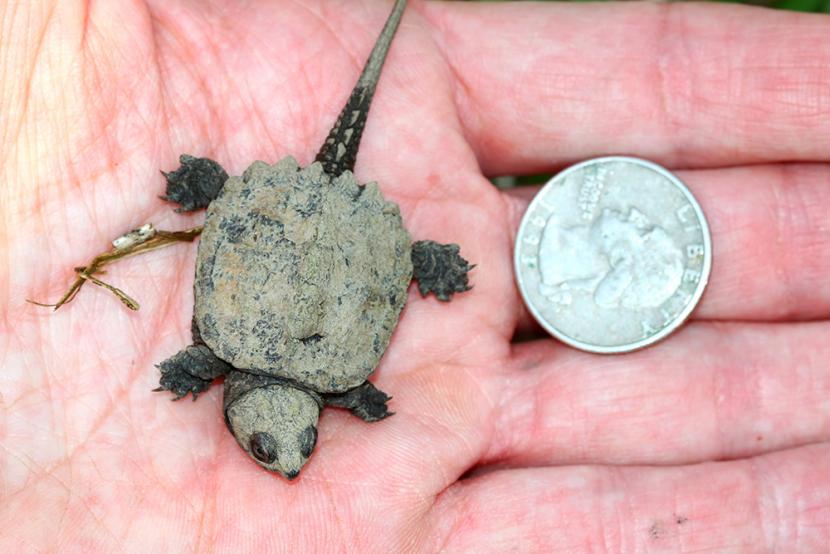 The thought flashed just in time for me to ungracefully swerve to avoid stepping on the little brown bump on the jogging trail. The little bump had a tail, and on closer inspection it had a head, too, and a quarter-sized shell. A baby snapping turtle! It was still covered in sand, which meant that it had only just emerged from its egg and dug its way out of the sand where its mother had buried her eggs last spring. 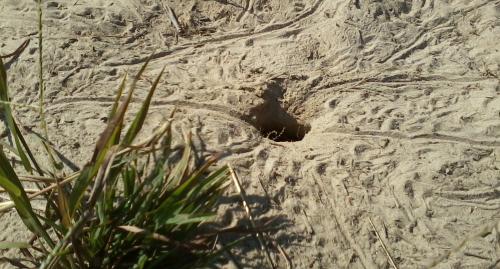 Tracks lead from a buried snapper nest toward a nearby stream. Forest Society photo.
Dragging its inch-long tail behind it as it trudged, it had created a little furrowed trail. When I followed that trail for about 20 feet, it led to three, 2-inch holes in the sand. More trails led away from the holes, so it was clear that Snappy had lots of siblings – 20 to 40 would be typical -- who had already journeyed forth in the direction of the stream nearby.

Wildlife biologists roll their eyes when people transfer human characteristics onto animals, but I couldn’t help but to think of the drama unfolding. A tiny newborn turtle pops out of the sand to stand alone in the huge, unknown world full of hungry predators, feeling an unrelenting urge to find water. It sets off to slowly march through a gauntlet of dangers. I’m pretty sure I was this little critter’s first near-death experience, but I won’t be its last.

I could only imagine what had happened to the other hatchlings. How many got grabbed by a hawk or skewered by a heron along the way to water? How many successfully found the water, only to get gulped by a bass or pickerel? Researchers say that most turtle hatchlings don’t survive. Their shells are soft at first and not much of a deterrent to predators. Then there’s the possibility that someone scooped one up and took it home as an unlucky pet or – worst case and illegal – as a commodity to sell. Fortunately Snappy and his siblings were born on a large parcel of conserved land and didn’t have to cross a road to get to the stream. Getting run over is one of the greatest threats to turtles in New Hampshire.

No wonder turtles lay so many eggs!

Finding the snapper hatchling brought to mind my first snapper experience. It was a hot Minnesota summer when I was about 8 and my sister 10. We were out on the lake in a rowboat one day with the boy from the camp near our family’s cabin. This lake fills with lily pads on one end, and that’s where we lazily floated, talking, bickering, dangling our hands in the cool water, picking lilies. I was up front, hanging over the side and gazing down to the muddy bottom. I saw what I took to be a log, but when the log moved I realized it was something else, something alive. When we realized it was a giant turtle, the biggest we’d ever seen, we scooped it up with the fishing net. Its head – the part I thought was a log -- was huge, its upper jaw hooked like a beak, and its tail spikey and prehistoric looking, so much different from the painted turtles we were used to seeing.

Of course we all wanted to go show the grownups this amazing creature. So we triumphantly rowed across the lake with the snapper heavy in the net, a dripping and mucky prize, then hauled it up to shore to show my aunt and uncle and their friends who gathered at the lake each weekend. I don’t think any of us kids thought about what might happen next. But while we were off playing by the dock, someone in the group went for an ax and before we knew it they had cut off the turtle’s head. The last thing I thought the grownups would do was to decide to eat that snapper, but that’s exactly what they did. Soon I was peering into a big aluminum tub filled with salty water and chunks of white turtle meat. Being a fisherman since I was old enough to hold a pole, I accepted this turn of events as just another way to eat from the lake, albeit a surprising one.

But the main reason my relatives killed that turtle was because they thought ridding the lake of a snapper was a good thing. At an average weight of 10 to 35 pounds, adult snappers are about as un-cute as critters come, and they’re often assumed to be all kinds of things they’re not. Some people vilify them as large-scale threats to waterfowl and game fish, but research shows they don’t significantly impact populations of either one. About a third of their diet consists of aquatic plants, with insects, spiders, worms, fish, frogs, smaller turtles, snakes, birds, crayfish, small mammals and carrion added in. People also assume they might get bitten by that beak-like mouth if they swim in the area where snappers live, but in reality snappers tend to swim away from people as fast as they can possibly go.

Someone who knows this firsthand after trying to catch snappers for scientific study in the water is Mike Marchand, a wildlife and wetlands biologist with the N.H. Fish and Game Dept. “They tend to be very shy in the water and try to escape. They don’t tend to be aggressive, and they don’t see you as a food source,” Marchand said.

Marchand takes calls from people who are concerned about snappers. He reminds callers that the species that lives here is called the “common snapper” because it is in fact common enough to be seen often. “The bottom line I tell people is that there are multiple snapping turtles in every body of water you’d be swimming or fishing in, and I don’t get calls of terror snapping turtles.”

On land they can show aggression and bite, but only if a person gets too close and tries to handle one without knowing what they’re doing. Snappers can present a conundrum for kind-hearted folks who try to help turtles across the road during migration, which is mostly in the spring nesting season but can happen in the fall as well if turtles are searching for a new waterbody. Only if it’s safe to try to help, Marchand suggests sliding something under a snapper, like a piece of cardboard, and pulling it to safety. Or, if the roadway is a quiet dirt road, you can just stop the car if safe and wait for the turtle to pass.

Helping hatchlings is quite a different story. The one I nearly stepped on was clearly vulnerable as long as it stayed on the well-used path. Hearing a walker and his dog coming, I picked up Snappy with two fingers and airlifted him over the high grass and brush to the edge of the stream.

With no hesitation, he waded in and then swam under a matt of weeds before any fish could find him. Will his luck hold out so he can reach adulthood? Who knows? What I really want to know is, will he ever remember the day he could fly?