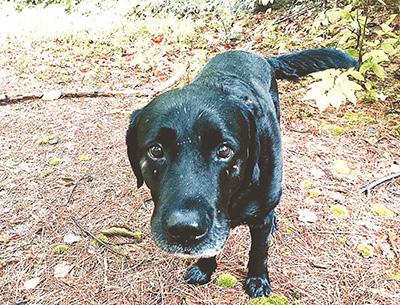 This dog was smart enough to decline an anti-fly hat.

Each winter, when I find myself occasionally longing for the warmer weather of summer, I try to remember about deer flies.

You are not likely to find much mention of deer flies in the tourist literature, as they can make a misery of a simple walk in the New Hampshire woods on a warm July morning or evening. That said, they aren't unique to New Hampshire by any means--in fact, closely related species are found around the world--but we have at least our fair share of them.

Deer flies are closely related to horse flies, both being of the Tabanidae family with deer flies in the genus Chrysops. Tabanids annoy cattle, horses, and humans alike by waiting in shady areas under trees or bushes for us to walk by. They are thought to be alerted to our presence by the carbon dioxide we breathe out--and by sight. They are attracted to movement, and, as my Black Lab knows all too well, they are also attracted to dark colors.

And they bite. Well, the females do, as they need a meal of blood for the development of eggs. The bites can be painful--female deer flies have two sets of scissor-like teeth that cut through skin in order to slice into a blood vessel. Their saliva has an anti-coagulant that keeps the blood flowing, which they sponge up with another little protuberance called the labella. I'll let readers insert their own joke here about blood-sponging females.

You can tell the difference between female and male deer flies by looking at their eyes--the female's eyes are set widely apart (to better see a potential host, perhaps), while the eyes of the male are so close together that they touch. No comment on that one.

The male deer flies, for their part, don't bite and are known to hang around drinking beer and watching sports on TV. Or so I've been told.

Insect repellent reportedly does NOT work on deer flies, so there's no point in drenching yourself in poison on their account if you're headed into the woods.

Because of that, people have done some funny things to avoid deer fly bites, like making a hat out of duct tape with the adhesive part of the tape facing out to catch the flies. Another reported remedy is to use a dark blue cup covered in a sticky substance called Tangle-Trap. The flies are supposed to be attracted to the color, approach the cup, then get caught in the sticky stuff. You attach the cup to a hat, or to a stick that you carry, thus (in theory) diverting them and their scissor-like mandibles from your tender skin.

I decided to do my own experiment. I didn't have Tangle-Trap handy, so I tried wrapping tape around the cup, sticky side out, and set out through my woods (approximate elevation 700 feet) with my dog on a warm muggy morning (deer flies, like dragon flies, respond to a warmer temperature range). I wore my Blue-Cup Anti-Fly Hat, but my dog took one look and declined my offer to make one for him as well.

As soon as we were under the forest canopy, the deer flies swarmed around us both like barflies on a high-roller in Vegas. Heady stuff--I'm not used to that kind of attention.

We walked for about a half-mile through the swampy woods. The mosquitos were thick and clearly no more impressed than the dog by my Blue-Cup Anti-Fly Hat. But the deer flies....

...well, it was inconclusive. I didn't get bitten on my short experimental stroll. But nor did I catch any on the sticky tape. That may have been because they were all descending on my poor dog, who was, typical Lab, a bit oblivious. More research is required.

I'm not the only nut in the forest experimenting with blue cups. In Florida, where deer flies are thick, staffers at the University of Florida Tropical Research and Education Center report success with blue cup hats and flower pots, theorizing that the blue contrasts well with green foliage and thus attracts the flies. (news.ufl.edu/2002/08/13/deerflies/ [dead link]) And in Michigan an avid gardener is blogging about her deer fly trap umbrellas, topped with blue cups covered in Tangle-Trap, that she uses to capture enough deer flies to allow her to work unmolested outside. (http://deerflytrapumbrella.blogspot.com).

Of course you could wait a few weeks for the deer fly season to pass, have a seat on the screen porch, and fill that blue cup with a cool beverage. You'll keep the male deer fly company that way.