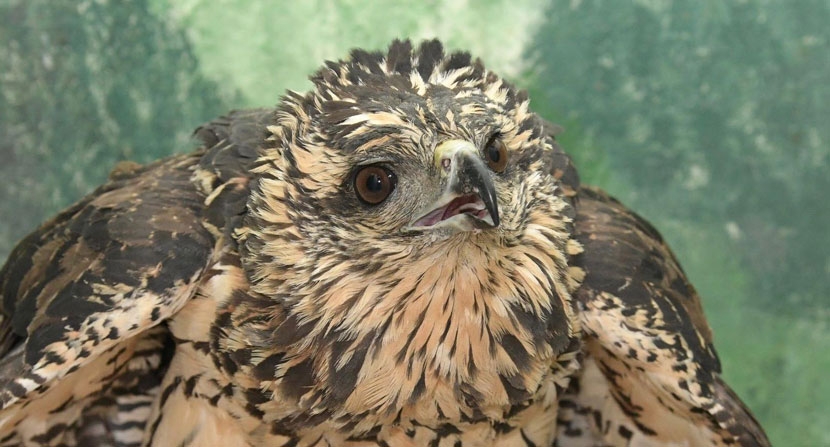 The great black hawk found recently in a park in Portland, Maine, was suffering from frostbite in its long, exposed legs and feet. Photo: Avian Haven via Facebook.

The recent rescue of a great black hawk in Portland, Maine, has my imagination going wild.

The hawk, native to the tropics of Mexico, Central, and South America, has long, bare legs. The winter storm and extreme cold were reported to have caused it to suffer a serious case of frostbite. 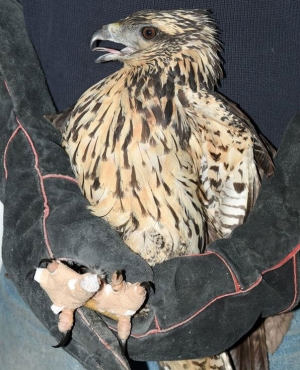 The great black hawk is being cared for at Avian Haven, a rehabilitation center in Freedom, Maine. Photo: Avian Haven via Facebook.
How and why did this bird come all the way to New England? Maybe it came up for four-star squirrel dining over the summer and decided to buy real estate. What is it like to be the first of your species to see snow?

Rogue birds tend to cause a commotion in New England. Birds are called “vagrant” if they stray far outside their expected breeding, wintering, or migrating range. Maybe you’ve heard about snowy owls venturing south of the arctic circle to New Hampshire’s coast during harsh winters. Or maybe you glimpsed a flash of red while scrolling through your social media feed in 2017, when a brilliant colored vermilion flycatcher posed for a selfie in a bird cam on Hog Island, Maine.

Even a casual bird-enthusiast like myself can attest to the thrill of seeing something you don’t recognize. It doesn’t matter whether it’s in my backyard or deep in the woods, an unfamiliar sight in nature makes my pulse quicken. I’ve found myself scouring bird books imagining rare discoveries I might make. In my case, it usually ends up being a scruffy looking sparrow.

When the great black hawk was first spotted in August in Biddeford and again in Portland in October, the sightings went viral online and birders and casual observers speculated wildly about where and how this bird came to Maine.

In recent years, I’ve watched the excitement over these sightings from afar. It happens more than you might think. In the 2014 book, “Rare Birds of North America,” Steve N.G. Howell, Ian Lewington, and Will Russell discuss nearly 300 rare or vagrant species seen in the U.S.

According to the National Audubon Society, the study of vagrancy in birds is still relatively new. I’m fascinated by the idea that some vagrant birds may be the Lewises and Clarks of their species. Sometimes an individual or flock of birds will venture incredible distances to test out new breeding or wintering areas.

Maine Audubon notes that the most common ways of explaining bird vagrancy aren’t a perfect match for their recent visitor. “It could be dispersed from its native Mexico, though we aren’t seeing an influx of other species similarly seeking new habitat.” The fact that great black hawks aren’t normally migratory make the great distance it traveled especially unusual. It hasn’t been trying to fit in with other hawks in the region, so it’s not confused about its identity.

Even so, my active imagination wonders what our northern forests would have to look like to support a great black hawk. The only other U.S. location to see a great black hawk was South Padre Island, Texas, in spring 2018. It often forages on the ground, sometimes in shallow water, pursuing prey on foot or in short spurts of flight. It is a common resident along rivers and oxbows in humid lowland forests and along streams. In a future milder climate, I can picture the great black hawk making itself at home among the silver maple forest and oxbow marsh on the Merrimack River floodplain outside our headquarters in Concord.

One way to satiate the active imagination is to look toward the past for answers and insight. What vagrants of centuries past are now considered native species? When you lengthen time scales, our human-generated lists of species and population maps and birds who don’t belong fade into the mist. There’s a living, breathing, ever-changing ecosystem out there and if humans are present, you’d best be sure we’re in the mix, too. 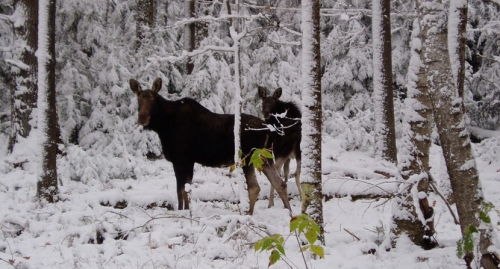 Each winter, the Forest Society hosts educational lectures on environmental topics. This year’s talks feature speakers focused on wildlife and landscape changes both in the past and future.

The lectures are all free and open to the public. For more details and directions, visit forestsociety.org/events.

Emily Lord manages the Society for the Protection of New Hampshire Forests’ online and social media presence. Forest Journal runs every other week in the New Hampshire Sunday News. Reach Emily at elord@forestsociety.org or on Instagram/Facebook @forestsociety.