Carrying On About Carry In-Carry Out 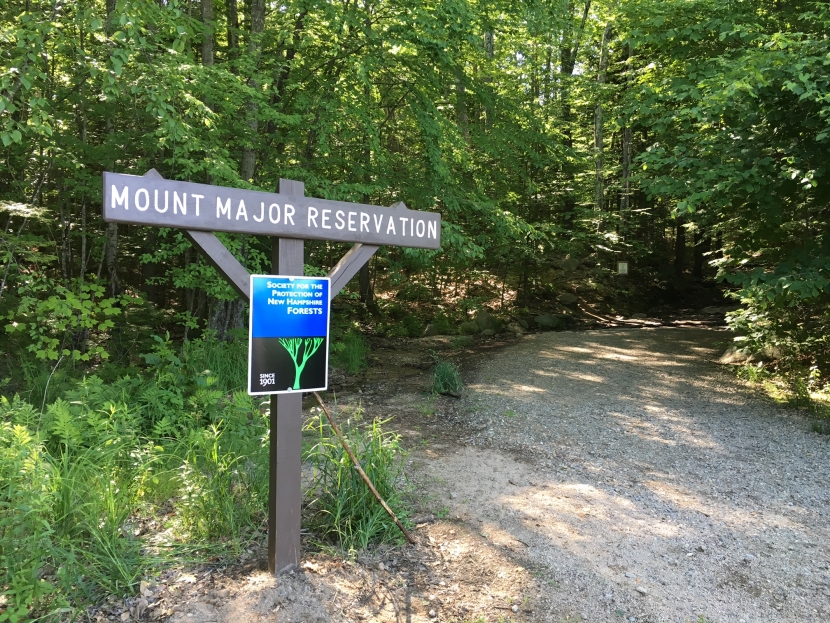 Hikers arriving at immensely popular Mount Major in Alton this summer will find a few changes, as the Forest Society is working with our partners to improve the experience little by little.

If you haven’t been there in while, the first thing you might notice is that the parking lot is now paved and striped, which is handy for those lucky enough to find an open parking space in the lot itself.

The second thing you might notice is that there are now portable toilets in the corner of the parking area, near the main trailhead.

The third thing you may notice are some new signs, including a familiar-looking Forest Society property sign. We don’t own all the land along the trail to the summit, but thanks to thousands of donors -- including the Town of Alton -- the Forest Society and its partners, the Belknap Range Conservation Coalition and the Lakes Region Conservation Trust, have been able to permanently conserve the trailhead and additional land adjacent the state-owned summit where hikers gather around the remains of Mr. Phippen’s Hut. Among our goals is to ensure that the popular trails to the summit remain open to the public.

The average visit to Mount Major is probably three to four hours, depending on how fast you like to make your way up and down the mountain and how long you like to spend at the top absorbing the view that is the reward for your climb. That’s long enough that having porta-potties at the trailhead is pretty convenient. After all, there’s a reason such a facility is sometimes politely called “the necessary house."

But you won’t find trash cans at Mount Major. Instead, hikers are asked and expected to follow the common practice of “Carry in-Carry out”—that is, whatever you carry in to the woods, you should carry out, and any trash disposed of once you get home. You might think of it as crowdsourcing trash management, while avoiding having a smelly, overflowing trash bin that attracts vermin on the trail.

Dogs are popular trail users at Mount Major, and many of the four-leggers like to take their humans up to the summit and back. Carry in –Carry out applies to furry domestics too, and dog owners are asked to bring a suitable bag for cleaning up after their dogs. Everybody hikes Mount Major, but nobody likes a trail lined with dog waste.

In New Hampshire, most people are willing to follow the Carry in-Carry out guideline. A few are oblivious. Conservation organizations, park managers and other landowners try to convey the need for public stewardship of trails with signs. When some members of the public fail to follow the guidelines, the frequent reaction is to put up more signs, until there’s a dizzying array of increasingly urgent warnings against myriad offenses, most of which are common sense anyway.

At Mount Major, one concern is that hikers might think it’s okay to toss trash in the porta-potties…it’s not. Those porta-potties have to be pumped, and trash can clog up the hoses. And if a piece of trash does make it through, it becomes a problem at the other end when the truck is flushed. Bottom line (as it were): No trash in the potty, or the potties will have to go.

That’s not necessarily intuitive, so Mount Major hikers will also see a couple of “educational” signs that we hope will get the message through. At the risk of offending, but in hopes of rendering a smile, we even committed the message to the high art of bathroom wall literature, the limerick:

There once was a hiker named Ron

Who threw trash into the portable john

It clogged up the machine

That keeps the john clean

And in a jiffy the biffy was gone.

We’ll find out whether this little outreach effort gets the message across.  If you’ve never hiked Mount Major, go early or try visiting on a weekday if you can. If you want to earn extra Karma credit, bring a trash bag and help clean up what the oblivious left behind—that’s often what students do on school field trips to Mount Major. And don’t forget to be prepared—bring water, wear appropriate footwear, know where you’re going and how the trail is marked. No one wants to carry you out once you’ve carried yourself in.

Jack Savage is the executive editor of Forest Notes: New Hampshire’s Conservation Magazine published by the Society for the Protection of New Hampshire Forests. He can be reached at jsavage@forestsociety.org, or follow him on Twitter @JackatSPNHF.