Can beavers make a tree fall in the direction they want?
Brenda Charpentier
Wildlife 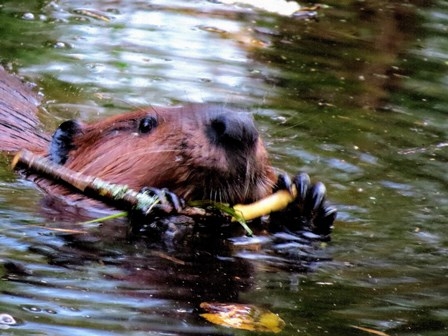 A beaver swims in the Merrimack River in Concord. Photo by Ellen Kenny.

As I tromped through brush and scrambled over downed trees to the edge of a wetland to find a beaver dam the other day, I realized that 1) I felt happy, 2) I didn’t care what time it was, and 3) I was completely engrossed by an intriguing question. The question came from a frequent visitor to the riverside trail system I was on, just down the hill from our offices in East Concord. 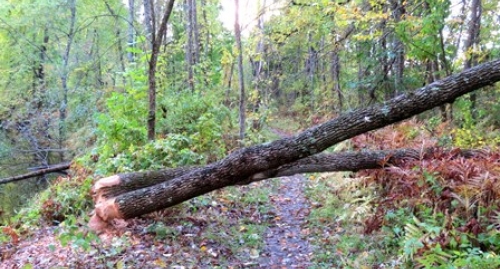 Beavers felled these trees across the trail at the Merrimack River Outdoor Education and Conservation Area. Photo by Ellen Kenny.
One morning she came to an abrupt halt in her walk because beavers had cut down two ash trees the night before and they were blocking the path.

She took a few photos and emailed them to us, and she casually wondered: “Had the beavers intended the ash trees to fall in that direction, or had the idea been for them to land across the stream?” 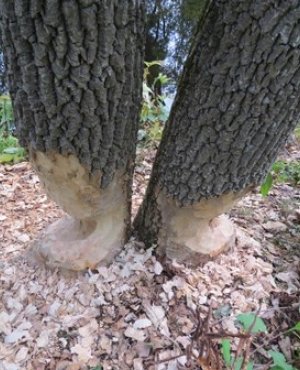 Multiple beavers may have been working on these trees. Photo by Ellen Kenny.
Felling a tree toward the water could be advantageous. The beaver would exert less energy hauling branches to its underwater food stash and to its dam. And it could eat bark while sticking closer to water, where it could dive to escape a bobcat, coyote or dog.

Being able to drop trees in a desired direction is a skill many human firewood cutters and backyard landscapers hone for years. Sometimes they get it right and often they don’t. Smashed garages and trucks attest to the trickiness of this endeavor.

The professional loggers who’ve mastered this skill can look at a tree and assess its lean, the angle of the slope it may be growing on and the weight of the branches,  and know exactly where and how to cut in order to lay the tree down where they want it.

Can a big furry rodent also fell a tree in the direction it wants it to go?

The beavers that were part of a 10-year study in Montana’s Bob Marshall Wilderness can, according to researcher Alex Badyaev, who teaches biology at Arizona State University. His research team observed Montana beavers working each summer for a decade and documented cutting techniques that led them to conclude that the reason beavers successfully toppled trees toward the water 70 percent of the time was because they intended to.

“This complex feat requires learning the optimal approach to a tree in relation to topography,” Badyaev wrote in an article about his research in the July 2015 National Wildlife magazine. He goes on to explain that using remote cameras, his team observed beavers cut higher on one side of the tree than another, which determined which direction the tree would fall. “In flat areas, beavers typically started their work on the side closest to water, gradually widening the cut over consecutive nights. Notably, as they circled the tree, they would rise on their hind legs, producing a second cut on the opposite side that was higher than the initial one. In just a few days, such trees would crash directly towards the water.” 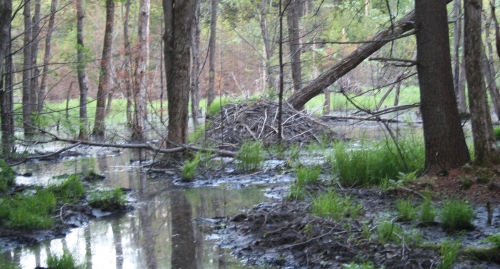 Beavers work furiously in the fall to insulate their lodges with mud and to add onto their dams in order to raise the water level, bringing them within swimming distance of more food. Photo by Brenda Charpentier
This is just one study in just one location, and earlier, less extensive research projects studying beaver-felled trees haven’t been as definitive about intent as the Montana study. At any rate it’s an intriguing question that sent me out to the beaver dam the other day to see the beavers’ latest work. Close to the streambank, I  found about a dozen recently felled ash trees, most of which landed toward the water. Were the ones that landed away from the water mistakes? The practice trees of young, inexperienced beavers? Or did these trees lean so far away from the water that no amount of strategic beaver cutting could get the best of gravity?

I asked Badyaev, and here is what he surmised: “The benefits of directional felling increase with distance from water. For trees growing along shorelines, the benefits are probably negligible. Plus many such trees collapse towards water because of slope. We also noticed that many individual beavers, including juveniles, work on such shoreline trees, especially when trees are small. Longer forays to distant large trees were typically accomplished by few adults who tended to be very consistent in their approaches to trees and their tree cutting behaviors.

Our research also suggests that prevalence of directional tree felling should vary between populations and locations, either because the benefits of such felling differ or because the demographics of local beaver populations makes cultural inheritance of tree felling behavior more or less likely.”

While I was wondering about directionality, some other beaver questions came to mind, and in my research to find answers I developed a much deeper appreciation for this truly fascinating creature.

Tree felling is dangerous. How do beavers escape harm from falling trees? They don’t sometimes. Beavers seem to be just as susceptible to accidents and miscalculations as humans. Badyaev mentions in his article that most beaver deaths from falling trees actually happen when the beaver’s head gets crushed between the stump and the upper part of the tree. The upper part collapses on the lower part, pinning the beaver’s head.

I found a story with a better ending in an edition of a Midwestern newspaper called Outdoor News. A conservation officer in Xenia, Ohio, was called to the scene of a beaver in distress because its tail was pinned under a tree, the paper reported. “The beaver was sitting next to a tree and a stump. Apparently the beaver was doing what they do, chewing the bark and cutting down trees. When this tree fell, rather than falling over, it fell off to one side and landed on the beaver’s tail. The tree was tangled in other tree limbs and vine growth, which likely kept it from falling normally.”

The conservation officer was able to free the beaver, which ran off towards the water apparently with no lasting damage, except to its pride!

When do beavers act most like New Englanders? Fall is the time for both beaver and Yankee productivity as we shake off our summer denial and get ready for winter. My husband and I have been caulking windows and cutting up some downed birch trees and stacking the wood, always with one eye on the thermometer. Likewise, beavers put more sticks, rocks and mud on their dams, insulate their lodges with mud and build up their food cache as winter nears.

Patrick Tate, a wildlife biologist with N.H. Fish & Game and the furbearer project leader, said beavers are quite lax over the summer months, but in the fall, they work to raise the water level behind their dams to flood more territory. “They are safest in water, and they’re raising the water level to be able to get closer to food sources,” he said.

On land, they’re more susceptible to predators, but that big paddle-like tail doesn’t slow them down as much as you might think. “I’ve seen beavers run on land, and from what I’ve seen they can outrun a person, but they’re most energy efficient moving in water, and they can dive for safety in the water,” Tate said.

Beavers stay in or close to their lodges for most of the time during winter, so they must store enough tree limbs nearby to last. At dusk and through these fall nights, they’re out there cutting trees and dragging branches under the water to tuck them into a growing submerged  brush pile of food.

What do beavers have in common with foresters? A forester’s job often involves choosing which trees to remove from a working forest to meet the landowners’ goals – which may range from creating a high-value stand of hardwoods that will one day pay the taxes to creating optimal wildlife habitats or a host of other possible goals. Rest assured that beavers aren't thinking 75 years ahead like foresters do, but they do change the makeup of the forests they work in. Their cutting choices actually promote the growth of young hardwoods they prefer to eat. Sometimes they will even cut big trees they have little interest in eating, resulting in the removal of shade, Tate said. “That opens up the canopy, allowing more sunlight, which will then allow more growth of the understory trees, which means more food for the beavers,” he said.

Could an orange-toothed rodent really be responsible for land being protected from development? Yes! (You saw that coming, right?) There is a beautiful spot in Goffstown – an old family farm property – that was recently protected from development through a conservation easement. The number one reason the family that owns the land decided to conserve it was because of the abundant wildlife they love to see. “We want to make sure the animals have a place of their own where they’re not invaded upon,” the landowner, Gayle Shost, told me during a recent visit.

Well, the reason for the abundant wildlife is the big pond and surrounding wetlands on the property, created by beavers back in the 1940s and still maintained by beavers today.  Shost remembers her father mowing in the very spot the pond now occupies, before the beavers got to work. Fortunately, the family had enough land to let the beavers do their thing. Now deer come there to drink and browse, great blue herons nest in the dead standing trees, and waterfowl, frogs, salamanders and snakes are abundant, as are all the various animals that prey on them like hawks, owls and foxes.

What would New Hampshire be like without beavers? More like Great Britain. Which is to say ecologically barren. British beavers have been missing (extirpated because of over-hunting and habitat loss) from the island nation for some 400 years, since the 16th century. Same story for bears, wolves and other large predators, as well as many birds, amphibians and reptiles that disappeared along with the nation’s forests.

Conservationists are fighting to bring beavers and other animals back in a “Rewilding” movement aimed at restoring honest-to-goodness nature to the country. They see beavers as integral to helping other species thrive because they create crucial ponds and wetlands by damming streams. “Beavers create good habitat for other species – where you get beavers, you get good biodiversity,”  said Simon Jones of the Scottish Wildlife Trust, quoted in The Guardian newspaper.

In New Hampshire, what does it mean if you come across pine, fir and hemlock trees felled or chewed on by beavers? These beavers are on the animal equivalent of emergency rations or have reasons other than food for chewing these softwood conifer trees.  Our beavers prefer to eat the inner bark, twigs, leaves and buds of young deciduous trees like alder, aspen, birch, maple and willow.

“If they start taking softwood trees, it’s a sign they’ve taken all the other available trees,” Tate said.

If it’s not food they’re after, beavers might just chew around the coniferous tree, girdling it, which kills the tree and allows other, more beaver-preferred trees to grow there instead, as mentioned above.

Whatever intriguing nature questions may grab your interest, I hope they propel you outside to wander, to lose track of time and to be thankful for all the intricate mysteries of the natural world.