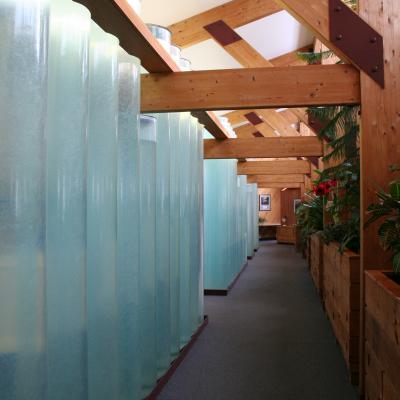 Water Tubes in the main workroom of the Conservation Center, Concord, NH Forest Society Photo
The building’s passive solar thermal and daylighting strategies have helped the Forest Society save energy from day one. The 1,500 square feet of south-facing windows allow sunlight and daylight to penetrate the space during the heating season. Thermal mass stores heat in the form of black slate tile floors in the lobby and 10 feet tall water tubes. A “fan-assisted convection loop” transfers stratified warm air in the clerestory across the inner part of the ceiling passageway to be absorbed by the north block wall and the floor slab. The south facing windows are positioned vertically, so during the summer, when the sun is higher in the sky, its rays do not enter directly and overheat the building.  Sugar maple and oak trees outside provide southwestern shade for the lobby.  Manually controlled vents in the ceiling can be opened to release hot air, and opening lower windows creates a chimney effect for night-time cooling and natural ventilation.

Regionally grown wood from New England’s forests are featured throughout the building. The laminated carrying beams are made from eastern red spruce. The staircases combine oak steps with cherry and pine railings.  Much of the paneling is native eastern white pine, and the walls at the end of the corridor are paneled with butternut. This helps local and regional economies and helps to create and sustain jobs in New Hampshire and New England.

In 1990, the Forest Society’s new addition was named for U.S. Senator John W. Weeks; sponsor of the Weeks Act in 1911 that established the National Forest system. The terrain east of the original Conservation Center building dictated placement of the Weeks Wing in a northeast exposure. This eliminated the possibility of substantial use of the sun for passive solar energy.  Also, the growing number of personal computers at each desk and their associated heat gain made solar gain less critical. Other features include triple-glazed windows and transom windows above each office door for better air circulation. The roof has a “sugar house” clerestory design to maximize natural daylighting capabilities and to increase the summer air exhaust through electrically operated windows. A berm on the north side of the wing keeps the exterior part of those walls at 55 degrees in hot and cold weather. The Weeks Wing is enclosed in “Blown-in Blanket” (BIBs) insulation.  By this method, insulation is blown into the cavity between the exterior wall sheathing and a mesh; on the inside resulting in the ability to see and fill missed areas. The Weeks Wing was built largely with local wood products such as white pine for clapboards, pine boards for sheathing, green hemlock for framing and white ash for interior wainscoting and trim.

This 11,400 square-foot wing was completed in April 2001 and was awarded the first LEED-Gold® certification in New England by the U.S. Green Building Council. Large pine trees harvested and milled on-site comprise the timber frame of this wing. The majority of the wood used for the building was harvested in New Hampshire. The red oak stairs, cherry and birch railings, ash trim, and red maple wainscoting were procured from working forests and timberland owners across the state.

Interior atrium of the French Wing at the Conservation Center, Concord, NH Photo by Gary Hall
The architect designed the building to be lit primarily by natural daylighting. North facing skylights in the ceiling and south facing third story windows flood the atrium with natural light reducing the need for artificial lighting as well as reducing electrical consumption. In the summer, a whole house fan in the cupola and operable windows are used for night-time cooling of the building.  Transoms, the small windows above each office door, are left open to allow warm air to escape even with the doors closed.  This system allows the building to remain at a comfortable temperature during summer without the use of conventional air conditioning. These measures, along with a robust energy management program, have reduced the French Wing’s electrical consumption by almost 60% of that used by an office building of similar size in the U.S.

The French Wing’s air tight shell has seven inches of blown in cellulose insulation in the walls and fourteen inches of insulation in the ceiling made from recycled news print. This insulation provides resistance values of R-24 and R-42, respectively. It also prevents the accumulation of moisture in the walls, which has potential to create mold problems. To further ensure superior air quality, the Forest Society chose paints, finishes, and adhesives specifically for their low toxicity. Outside air is continuously brought in to each room, through an energy recovery ventilation system. The central copier is located in a separate room and is exhausted outside to avoid ozone and toner dust in the offices and common areas.

Planters surrounding the atrium are watered using filtered water from the sinks, a water fountain, the shower, and the dishwasher.  This “greywater” is captured, filtered and then pumped back up to the planters. The water not used by the planters then drains to a secondary tank that waters a flower bed on the south side of the building. There are two sets of composting toilets in the building.  First there are two foam flush toilets manufactured by Clivus New England upstairs here on the north side of the building. Each uses about two ounces of water per flush.  There are also two flushless Phoenix model toilets which use no water.  All the bathrooms are connected to basement composting units where human waste and toilet paper are mixed with wood shavings.  Over time, this will decompose into valuable compost.  Most modern-day toilets use over fifty times more water than the Clivus composting toilets. The French Wing uses approximately 20 gallons of water per day – that’s almost 90% less water than an office building of similar size and occupancy.