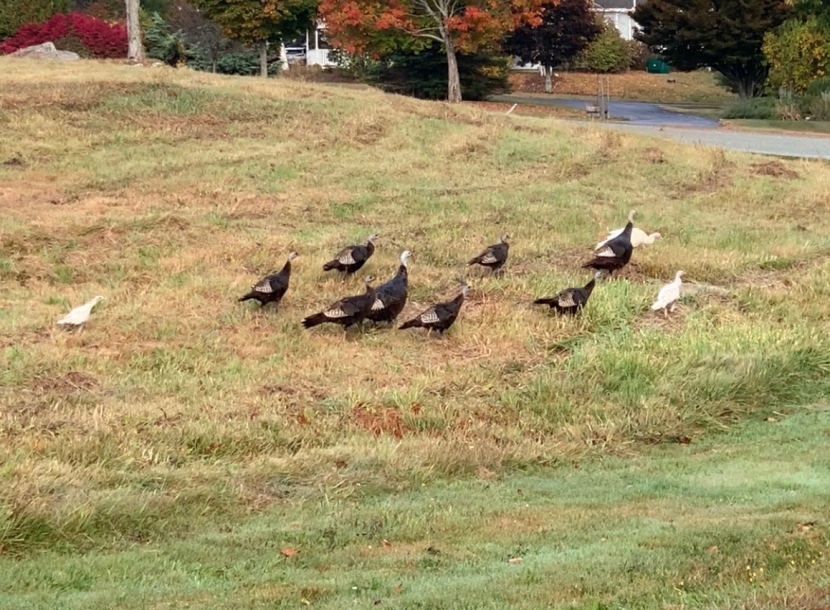 Have you ever seen a white turkey?

No, not the domestic Thanksgiving turkey variety — a white wild turkey!

The local population apparently features interesting genetics. Albinism can arise from breeding of two “heterozygous” parent birds which do not necessarily exhibit albinism but carry the recessive genes.

Neither female hen nor the male tom necessarily exhibit white plumage but some offspring with the albino gene from both sides may exhibit albinism.

Due to the size differences, it appears that two different, related broods included at least one white poult this spring. Nesting season occurs in May and June.

By early summer, young turkey poults fly up to the safety of night roosts often in tall white pines, greatly enhancing their chance of survival.

In winter, toms and hens roost and forage together more frequently in larger mixed flocks. Pre-breeding activity begins in late February with toms displaying for hens in March, April and May.

Unlike snowshoe hares and short-tailed weasels called “ermines” specifically adapted to change pelage for winter camouflage, the albino turkeys are a genetic anomaly not an adaptation.

Perhaps they will benefit from enhanced winter camouflage or suffer by not absorbing as much heat from scant winter sunlight on dark black iridescent feathers like most wild turkeys.

Could white turkeys be another sign of an already odd year 2020? Or perhaps an extraordinarily snowy winter lies ahead in 2021.