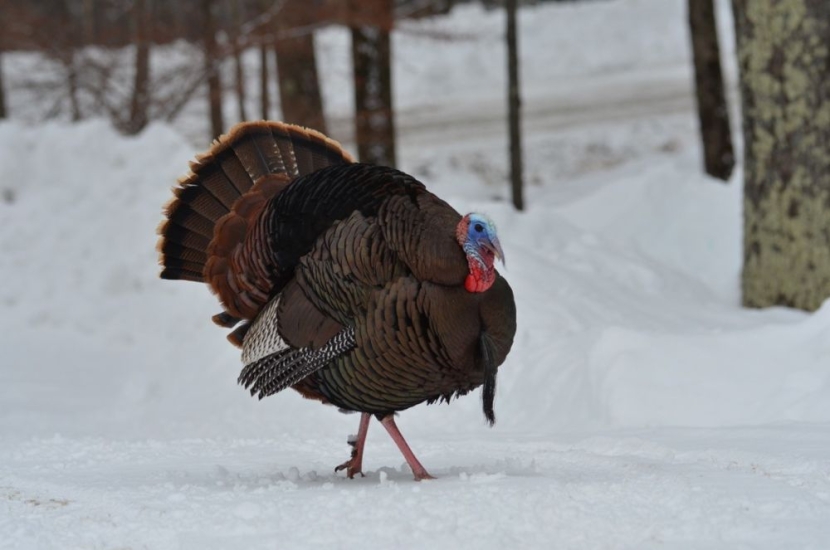 Tree Farmer Tom Thomson of Orford, NH recently captured a photo of a male Tom turkey strutting near backyard birdfeeders where flocks have been feeding this winter.

The undeniably stronger late winter sunlight is the agent of change in the forests and fields of New Hampshire. Even as bitter cold temperatures return and snowstorms periodically punctuate the weather forecast, breeding activity for mammals and birds begins in late winter.

Late February is peak breeding season for coyotes, foxes and bobcats. Weasel family members including mink, ermine, fishers and often more conspicuously, skunks become more active on warm or foggy February evenings. Many of the furbearing wildlife species puruse mates in February so birthing occurs in April at winter's end to coincide peak of rodent prey species emergence from winter dens with inexperienced young of the year. The peak of mice, voles, chipmunks, squirrels in April feed the young of the year of larger predators.

Owls begin nesting and woodpeckers are drumming to attract mates before February. Areas with wintering turkey flocks in oak woodlands, farmlands with corn or dairy operations and more suburban backyards with birdfeeders witness an uptick in wild turkey activity.  Separate flocks of hens aggreate into larger flocks which roost together in tall white pines. Smaller groups of mature Tom Turkeys and juvenile Jake Turkeys will combine into mixed flocks of Toms and hens.  Even before March the turkey flocks appear to be increasing in numbers as flocks combine for safety while feeding and foraging in the strong late winter sunshine where snow has melted away on south-facing hillsides.

Tom Turkeys begin to practice dramatic pre-breeding season displays: fanning tails and strutting and dragging wingtips for the growing audience of unreceptive and ambivalent hens. Breeding season typically occurs in late April and early May when actual nesting occurs. Yet the pre-season displays - including aggressive interactions between rival males - occurs at staging areas where flocks tend to feed by day.  The displays and fights among Tom Turkeys help to determine dominance and the social hierarchy of males in these mixed flocks.

Tom Thomson shared a photo of one such displaying Turkey recently against the snowy mid-winter backdrop of the White Mountains Region.

Dave Anderson is the senior director of education for the Forest Society and co-host of Something Wild on NHPR.