Summertime... and the living is easy? 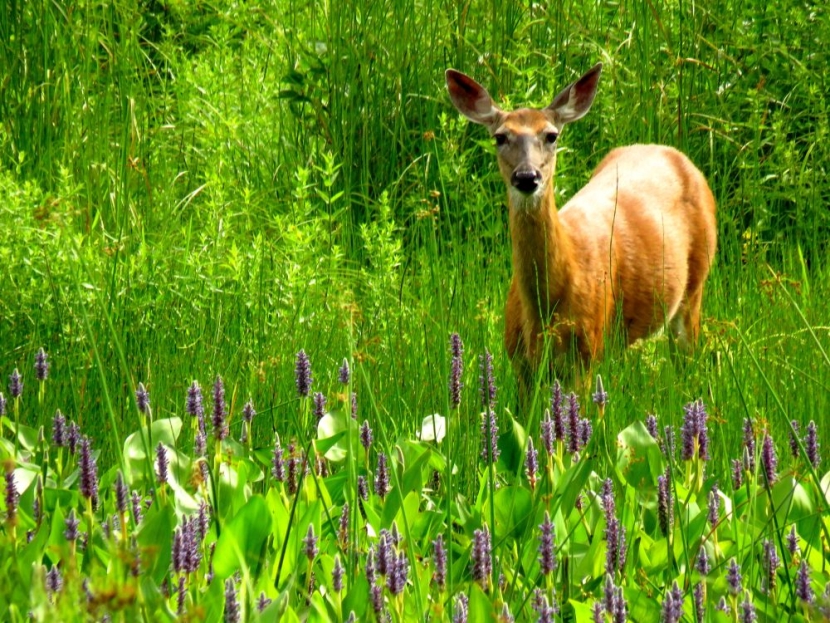 Doe, a deer, a female deer. This white-tailed doe is foraging in lush wetland vegetation near the Merrimack River. (Photo: Ellen Kenny)

All photos by Ellen Kenny.

The mid-summer vibe is all abot "making hay while the sun shines."  The longest and warmest days of summer are most productive for wildlife feeding their growing broods while protecting offspring from many dangers of predators - with families of their own to feed.

The oxbow ponds and shallow wetlands and wet meadows along the Merrimack River and the Mill Brook Wetland complex feeding Eastman Cove are host to myriad insects and plants feeding legions of fish, frogs, turtles, crayfish.  These in turn feed waterfowl and songbirds as well as rodents including red squirrels and weasels including otters. 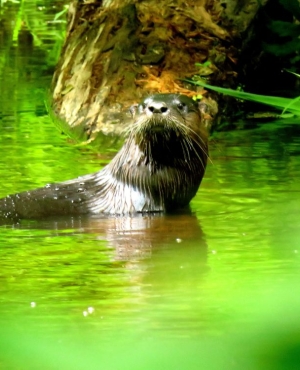 The largest member of the weasel family is the river otter. Photographer Ellen Kenny recently found a pair of otters moving rapidly through a former beaver pond now drained to a meadow with a stream at its center. Ellen describes the action:

"These two were moving fast and I didn’t want to spook them.  They were snouting around in the foliage on either side of the stream, coming up crunching on either crayfish or sunfish and then back to foraging.  Very impressive predators-  after they sea-serpented out of the cove."

Nearby a wood duck hen was guiding its vulnerable and adorable duckling chicks across the water near the hollow tree where she had nested back in May and early June. Since leaving the shelter of a tree cavity nest and tumbling down to the ground, the ducklings stick close to their mother hen as they cannot fly to escape danger that potentially lurks both above and below the water. 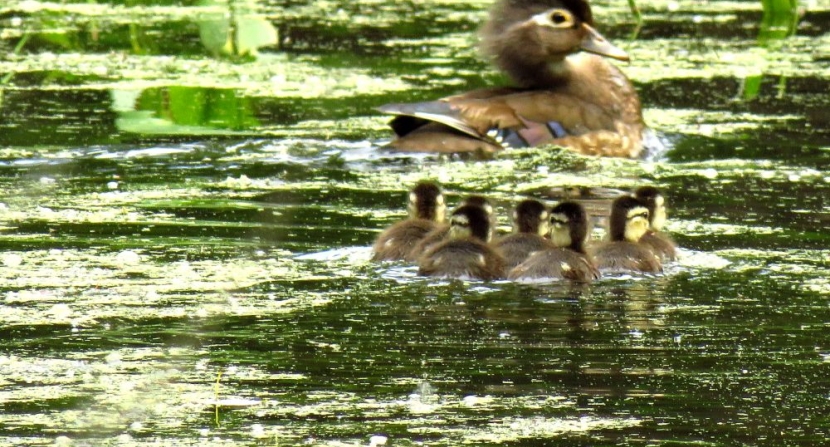 Ellen shared how she located the hen and her brood by listening to the morning soundtrack along the wetland...

"I could hear a mother wood duck shrieking the warning system upstream.  Poor mother wood ducks-  so much to worry about out there, between the snapping turtles, the otters, the hungry pickerel and the bullfrogs." 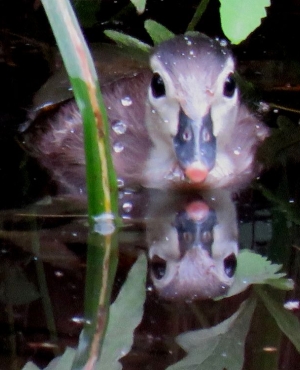 Yes fish and frogs will prey upon young ducklings. The brood sizes are typically large for ducks - 12 eggs and 8 nestlings might result in recuitment of 1 or 2 adult ducks by next year. The first year of life is fraught for all wildlife species.

Songbirds like the female red-winged blackbird are busy foraging caterpillars and flying insects - dragonflies and damselflies included. In this case, the Redwing caught a Japanese beetle for breakfast.   Redwing Blackbirds are gregarious - associating in aggregations of many individuals for safety in larger summer flocks.  Arriving as early as March, redwings have already raised nestlings earlier in spring than many other songbirds which arrive later in May. 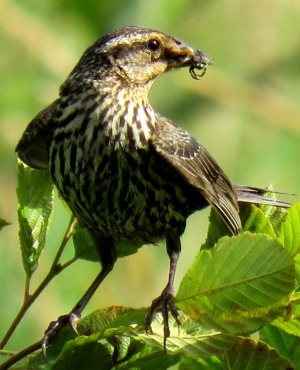 Songbirds nesting close to the ground include Cardinals and Gray Catbirds. Their nests, eggs and young are vulnerable to predation by squirrels, jays, snakes and more.  In addition to a diet of seeds and fruits, squirrels are carnivorous and skilled aborial predators of birds eggs and nestlings.  Ellen watched one red squirrel:

"This red squirrel had been skulking around the forest floor beneath a thicket, up to no good, and caught my attention because a coven of catbirds encircled him screaming with maternal rage.  My camera and I were apparently the last straw--  he had to give up his sneaky nestling breakfast plans and took refuge in a tree.  Screaming ceased." 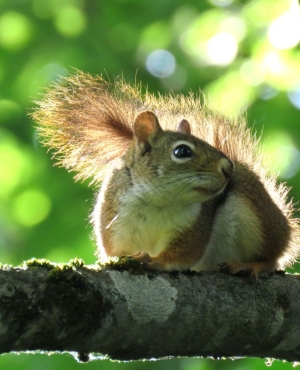