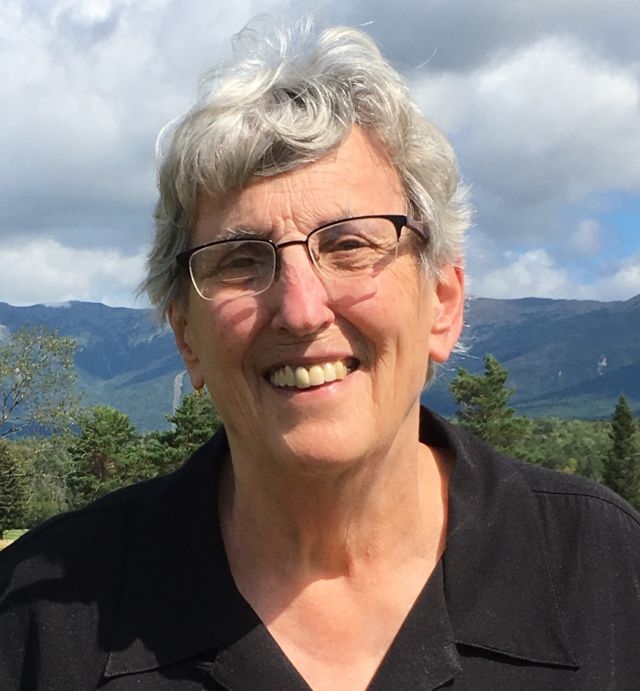 Concord, N.H. (Oct. 18, 2019) - At the Society for the Protection of New Hampshire Forests Annual Meeting, the organization presents its Conservationist of the Year Award. This prestigious award honors people whose work to promote and achieve conservation is exemplary; people whose actions have made a difference not just in their own backyards, but also have advanced the protection and stewardship of land statewide. At the Forest Society’s 118th Annual Meeting, held in September, Susan Schibanoff was honored as the Conservationist of the Year for her role over a decade in helping to defeat Northern Pass.

When Northern Pass announced its plan in 2010 for a 192-mile overhead power line bisecting New Hampshire, and her property in Easton, Schibanoff decided to take action. She started a blog called Bury the Northern Pass, which became the touchstone for thousands of New Hampshire citizens who opposed the project. Bury the Northern Pass became a source of information for all that resisted the project, with the latest news, call-to-actions, and next steps. Schibanoff’s writing skills kept a growing community of activists informed, engaged, and ready to act.

“The unanimous decision of the Site Evaluation Committee to deny Northern Pass’ siting permit, and the unanimous decision of the New Hampshire Supreme Court to uphold the SEC decision, were each directly attributable to Susan and her decade of committed work,” states Jane Difley, former president/forester for the Society for the Protection of New Hampshire’s Forests. “Northern Pass was a long and arduous fight won by many, and one good thing I can say came from our collective experience with Northern Pass is the incredible friendships that were formed. I count Susan among those friendships.”

Schibanoff’s current projects include research and writing on White Mountain history. Her article, White Mountain History and the 'Communications Revolution', will appear in Appalachia, the journal of the Appalachian Mountain Club, in 2020.

Schibanoff has worked tirelessly for more than a decade to help conserve the landscapes that make New Hampshire beautiful.  She lives in Sugar Hill, where she retired from her work as an English professor at the University of New Hampshire. Born and raised in New Jersey, she received her B.A. degree from Cornell University and Ph. D. from the University of California. Schibanoff taught early English literature at UNH for 35 years, while maintaining a second home in Easton, New Hampshire. She and her partner have hiked all of the 48 4,000-footers in New Hampshire, the additional 20 4,000-footers in New England, and most of the 46 High Peaks in the Adirondacks.